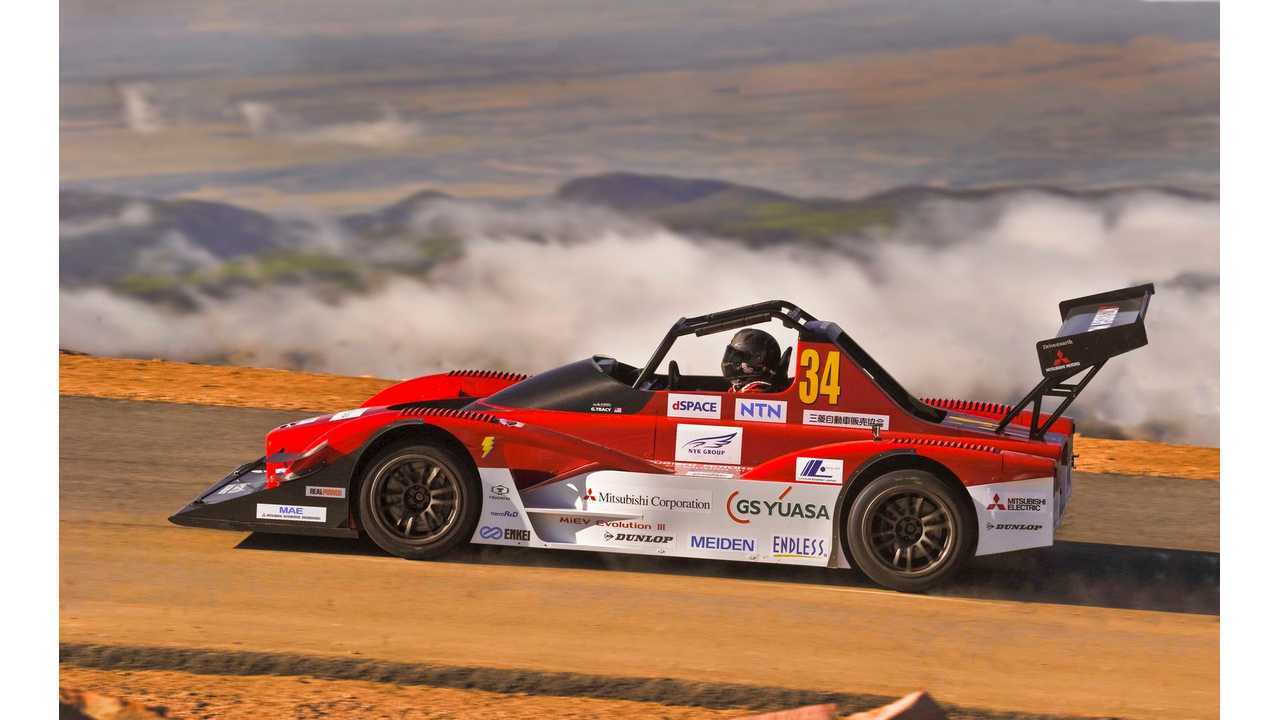 As qualifications indicated, the pair of Mitsubishi MiEV Evolution III vehicles with Greg Tracy and Hiroshi Masuoka behind the steering wheel led the Electric Modified Division class in the 2014 Pikes Peak International Hill Climb. The open question was just, if either would be fast enough to defeat the combustion racers.

And now we know the answer. Greg Tracy won the Electric Modified Division with a time of 9 minutes 08 seconds 188, taking 2nd overall just 2.5 seconds behind the leader! Hiroshi Masuoka was second among EVs and third overall, so we have two EVs on the podium this year.

The order of the remaining three contenders did not change in comparison with qualifications, however Tajima "Monster" Nobuhiro faded from the top two and was just three seconds faster than in 2013 in wet conditions.  The slow time this year must be due to some technical issue. On the APEV team, we found a time of 09:37, which is several seconds better than those in the table from Mitsubishi's press release.

Also, Ikuo Hanawa in HER-02, after last year's technical problems, this year was slower by 20 seconds than in 2012.

Interesting is that Roy Richards reached Pikes Peak in a 2012 Honda Fit EV equipped with a steel cage (Electric Production class) in 12:55.591, which is almost two seconds faster than the custom Tesla (with different drivetrain and battery pack).

Then we see Jeremiah Johnson with 12:20.448 on the Brutus Electric Motorcycles V2 in Electric Modified Bike class.

Another prototype motorcycle - 2014 MIRAI with Yoshihiro Kishimoto on board reached the top in 13:36.654.

The missing result is for 2014 Toyota RAV4 driven by Steve Wickham, which in the first section was faster than the Honda Fit EV, but we don't see a time on the table.

For all unfamiliar with Pikes Peak International Hill Climb we found a short description of the race and course:

"The race starts at an elevation of 2,862 meters and takes competitors through 156 corners on a 20 km course to the finish on the 4,301 meter summit of Pikes Peak. With an elevation difference of 1,439 meters, atmospheric pressure, temperature, weather and other conditions vary significantly between the start and finish. A feature of the race course is that it is split into three major sections: Bottom at the foot of the mountain, Middle and then Upper near the summit.

Lined by coniferous trees, the Bottom section starts with its rhythmical series of mid- to high-speed corners but all of a sudden the drivers hit a series of much tighter and difficult turns which demand the utmost care and concentration.

The Middle section is distinguished by some spectacular scenery with oddly-shaped rocks closely bordering the road. This is a very technical section as shortly after the start a series of tight hairpin bends demand precise handling as the car races along the steeply ascending road.

The Upper section is a very high-speed course taking competitors through many fast corners between craggy rocks and boulders. With little guard railing at the side of the road, this very difficult section brings with it the risk of plunging over the edge should the car slide off the tarmac. This is why the highest levels of vehicle stability are required over the high-speed parts of the section. At 4,301 meters, the mountain summit is higher than Mt. Fuji and the thin air means that cars powered by internal combustion engines lose power the higher up they go. Electrically powered cars, however, are unaffected by the thin air and so this could prove the key section in setting a really fast overall race time."

"I am extremely happy to be able to deliver this Electric Modified class victory to Mitsubishi Motors. This win means that I am a winner both in two-wheel and in four-wheel vehicles, transitioning towards four wheels was because I really wanted to race with an electric vehicle. The Mitsubishi Motors team prepared a fantastic race car for me. I want to thank the team and also Masuoka-san who helped to develop this phenomenal race car to capture this win. This victory is truly a team effort. The road surface condition today was rather slippery but the S-AWC had eliminated any unnecessary drift of the car, and I was able to attack turns all the way to the top with full confidence. One thing that I am disappointed about from my run is that I was a little too aggressive under the braking in some turns. Therefore, the brakes started to fade a little bit towards the end, and due to pounding from hard braking, I think I lost some time at the top. I am a bit gutted since if it wasn't for this, I think we really had a good shot at winning the overall as well. With that said, I am really proud to be able to deliver the victory in the Electric Modified Division to Mitsubishi Motors driving the MiEV Evolution III."

"First of all, I would like to congratulate Greg on winning the Electric Modified class. He drove the MiEV Evolution III spectacularly and definitely deserves this win. As a teammate and as a team partner, I could not have been happier for this result. The weather was picture clear today and without any concern with the rain coming in, so I was able to drive aggressively all the way to the summit. If I was to rate to my driving today, I would say it was about 95 points out of 100. I could not deliver a win but I am proud to be able to assist on a one-two finish for the team. As we competed in Pikes Peak for three years with an electric vehicle, we were able to develop an advanced racing machine while learning further about high-level technologies. Additionally, we were able to see the young and upcoming engineers mature through this program. I am pretty sure that the data and experience garnered through this Pikes Peak participation will bring extreme value as we further develop the electric and plug-in hybrid vehicle technologies in the future."

Mitsubishi Motors has entered the Pikes Peak Hill Climb three years in a row since 2012, viewing it as an opportunity to verify the performance of major EV components. In the 2012 race we were able to verify the performance of the motors and battery module from the production model under grueling conditions. In 2013 using motors and battery still under advance development we were able to verify the performance potential of these components as well as their durability under real-world driving conditions. In the 2014 Pikes Peak, we have verified these components' durability performance and will reflect them in our next-generation EV and PHEV models. In addition, we will use data from the race to not only to improve four-wheel control technologies - one of MMC's specialties - to allow future cars to drive faster and with greater stability, but also use Pikes Peak experience to further educate our control system engineers.

We plan to continue development of these four-wheel control technologies at the heart of the control systems in our e-EVOLUTION (integration of electric-motor drive and S-AWC) announced in our New Stage 2016 mid-term business plan."

"This was our 3rd year competing in Pikes Peak International Hill Climb, and we were able to come home with our goal of winning in the Electric Modified class. I am pleased to be able to demonstrate our advanced electric vehicle technology with this victory. In addition, we were just shy of 2.5 seconds from the overall winner who had an internal combustion engine, but this shows the vast possibilities of electric vehicles in the future moving forward.

One of the key element that played a big role for our result today was S-AWC (Super-All Wheel Control) which is an sophisticated vehicle stability control system. The S-AWC system will monitor the vehicle dynamic attitude and control the torque of each wheel independently, and while this provides advanced safety performance for normal driving on streets, it also aided our drivers to be able to control the vehicle at the limit by using it as an additional tool for them in motorsports form.

Also, by our participation in this race, we were able to gather various data on combining the electric and S-AWC system to utilize towards development on future production models, and our ultimate goal is to use this information to manufacture vehicles that has highest safety technology."