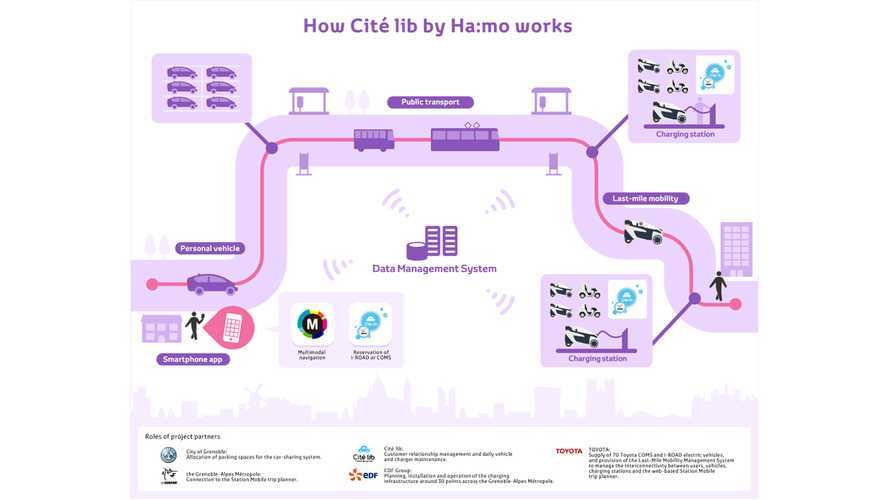 Toyota recently announced that in October 2014, it will launch a new car sharing scheme called Citélib by Ha:mo in Grenoble, France, which will utilize 70 i-Road and COMS electric vehicles.

The main idea developed thanks to a partnership between the City of Grenoble, Grenoble-Alpes Métropole, EDF Group, Toyota and Citélib is to supplement public transport. The project will be operational for a three-year real-life test.

Besides i-Road two seaters tested previously only in Japan, and COMS single seaters with a small rear storage compartment, the project will see a charging infrastructure built specifically to support the vehicles. EDF will install around 30 charging stations, each with whole set of spots.

"In October 2014, 70 Toyota i-ROAD and COMS ultra-compact electric vehicles, and around 30 charging stations developed and managed by EDF’s subsidiary Sodetrel, will be open for service for a period of three years thanks to a unique partnership between the City and the Metropolitan Area of Grenoble, French energy company EDF, Japanese car maker Toyota and Citélib, a local car-sharing operator."

"Connected to the public transport system’s IT infrastructure, this new car-sharing scheme will complement Citélib, the current car-sharing service of Grenoble, by allowing users to pick up one of the small EVs at one location and drop it off at another. The project also aims to promote interconnectivity of public transport methods (trams, buses, trains) and a new type of personal mobility using small vehicles that don’t take up as much space as a normal car. The main idea is to allow commuters to drive the first or last kilometres of their journey for increased flexibility and time-saving, thus contributing to reducing traffic congestion and improving air quality in city centres."

According to the press release, surveys show that the average daily commute in Europe takes between 40 and 50 minutes and that when using public transport, most of the people still have to walk a good 15 minutes to reach their final destination.  The following example was presented to show the advantages of car sharing:

"Just imagine: it’s Monday morning. You leave your apartment on the outskirts of Grenoble at 7:25 to go to work. Half asleep, you take the tram to the city centre―a 20-minute ride. You get off, and wait for the connecting bus for five minutes. Ten minutes later, the bus drops you off five minutes from your office. It’s 08:05. You’re late, again, for the 8:00 meeting and haven’t even had time for a coffee. Sometimes, for more flexibility, you take your car. You drive to the city but this means you must leave even earlier, at 7:15 – and that’s not a guarantee you’ll arrive on time, with traffic and the time it takes to find a parking spot. Sound familiar?"

"With Citélib by Ha:mo, say goodbye to stress and delays. During your tram ride, you whip out your smartphone. With an app, you can visualise the available i-ROADs at your usual stop. In a few clicks, you reserve and pay. Another app can also allow you to see the status of traffic and public transport before you leave, so you can plan the best route that day."

"Once you get off the tram, all you have to do is flash your phone onto the charging station to release your i-ROAD. In six minutes, you ride to the charging station near your office, two minutes away. It’s 7:53 – plenty of time for a coffee before the 8:00 meeting. You just saved 30% of your commute time. Going somewhere else that morning? No problem. There are around 30 stations in Grenoble, a network tight enough to get you as close as possible to your destination."

“The Grenoble-Alpes Métropole community has always been open to innovation. In terms of scale, it’s perfectly suited to this kind of test, and in Grenoble, we have a tradition of daring to do things. The partnership itself, between us, Toyota, EDF and Citélib, a local car-sharing operator, is in and of itself also an innovation in France."

"It’s a great opportunity for our community to test, for three years and exclusively in Europe, a new mode of mobility that’s not only innovative but also economic and ecological It's an experimentation that is bound to be followed by others for the benefit of our citizens.”

“To become the city of tomorrow, Grenoble must be both attractive economically, and a nice place to live. Electric mobility offers a good measure of both, by allowing different types of transport to complement one another. It brings together traditional types of transport with innovative ones such as this type of last-mile mobility brought about with this project."

“This concept fits within our overall future mobility vision which is based on four pillars: safety, comfort, ease of use and ecology. Ha:mo was designed to reduce the stress caused by traffic jams, peak traffic hours, and searching for a parking space. It also allows a reduction in emissions that cause poor air quality in city centres.”

“On top of our current vehicle range, from two to nine occupants, Citélib by Ha:mo will fill an important gap for short-distance travel and allow our customers to pick up and drop off their vehicles at different locations."

We have seen 30% annual growth of car sharing in Grenoble, and our service attracts 50% private and 50% corporate customers. It supports the development of economic activity in various areas of the metropolitan area, and links university campuses and research centres.”

"A look at Ha:mo, Toyota's optimized urban transport system. Ha:mo has been trialed near Toyota's headquarters in Japan, and will soon be expanded to Grenoble, France."

"Toyota has been conducting ongoing verification testing of Ha:mo, its optimized urban transport system. So far, the trials have been conducted in and around Toyota City in Japan."

"We asked Ha:mo trial users from Chukyo University to share their thoughts about the project."