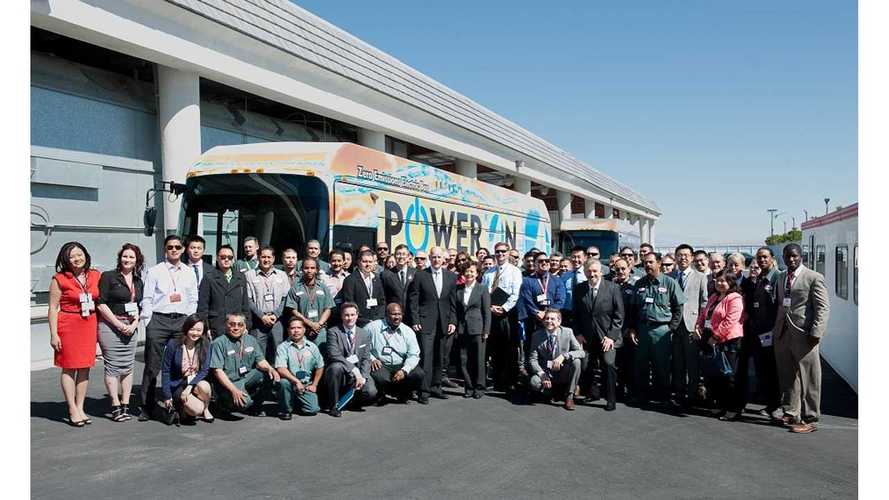 The Antelope Valley Transit Authority, the first to received from BYD a California-made electric bus, announced that the vehicle (still in tests) is performing better than advertised.

This weekend AVTA and BYD conducted a 24-hour marathon loop from Rosamond to Palmdale a total of 18 times on three shifts (each between 240 and 256 miles before recharging).

The result is 746 miles over the 24-hour period in an electric bus!

"This weekend’s 24-hour marathon began on Saturday at 1:04 in the afternoon starting from the BYD factory in Lancaster. AVTA’s electric bus was loaded with 5,250 lbs. of sand bags to simulate the weight of 35 passengers. The bus traveled a total of 240 miles before its first battery charge, which is nearly 100 miles more than BYD advertises and 30 miles more than is needed to service an average transit route in the Antelope Valley. The air conditioning system ran during most of the test except during the early morning hours when it was cold outside."

"This is the second test for AVTA’s electric bus. Its first unofficial test was July 29 when it traveled to Los Angeles to pick up the consul general of the Chinese Consulate who was scheduled to tour the BYD manufacturing facility in Lancaster. AVTA offered to pick up the Chinese delegation using its new BYD bus in order to test the zero emission vehicle’s performance on the 14 freeway. After circulating downtown, the electric bus easily climbed the 14 Freeway grade which has an elevation change of nearly 4,000 feet. The 92-mile trip ended in Lancaster, CA with 64% of the bus’ battery life still remaining."

The most important conclusion is that electric can work just like its diesel counterpart.

“This is tremendous news and it proves the BYD electric bus can be a transit work horse like its diesel counterpart. We are looking forward to putting our electric buses into service on local transit routes to further evaluate their true performance under all weather and road conditions.”

“We are ecstatic to see our electric bus performing so well. Our 12-month demonstration project is now off the ground and we could not be more pleased at the early results. We are also hopeful our plans to install wireless charging stations at AVTA’s two main transfer centers will extend the battery life of our electric buses even more than BYD technology can guarantee.”