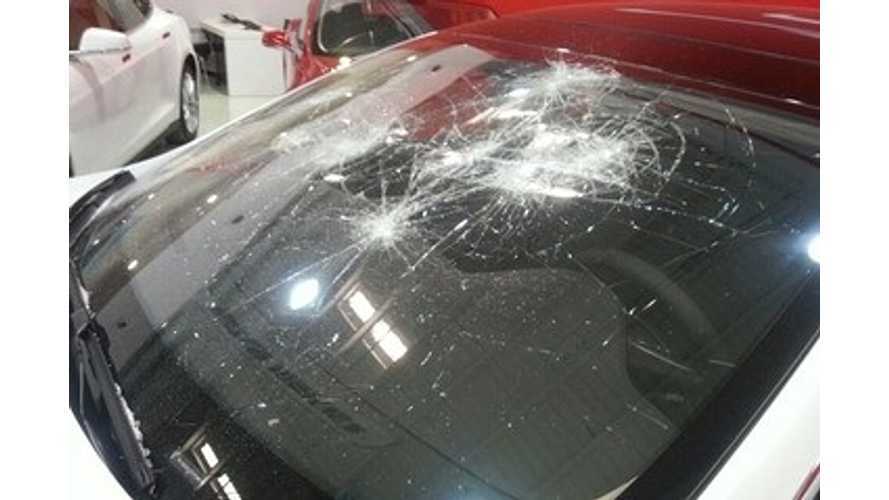 It has been no secret that some delays over regional deliveries of the Model S in China have led to some high profile protests by future Tesla owners both before and after the keys to the first all-electric sedans where handed out in Beijing in April.

However, Wall Street Journal's report on what Yu Xinquan, an e-commerce entrepreneur who lives in northern Chinese region of Inner Mongolia did upon taking delivery seems a bit extreme.

Moments after taking delivery of his new Model S, Mr. Xinquan then took a wrench to town on his new car's windshield!  (We note he was careful to not do too much monetary damage to his car outside of the obvious)

“It’s a protest against the company.  Tesla’s arrogance made me angry.”

It was actually Yu Xinquan who spearheaded earlier demonstrations against Tesla for failing to deliver on time.

The group and Mr. Xinquan eventually met with Tesla Motors CEO, and Mr. Musk said after the meeting that “I think we’ve resolved that” - apparently not so much.

The angry Model S owner said that in early April he was promised to finally receive the car within six weeks, along with some other perks - a limited edition plate and free installation of EVSE equipment.  During his video of the incident, which as now gone viral in China, he said,“the company hasn’t delivered”.

Tesla replied to his inquiries as to why his car had not yet been built that production would be not be on a "first come, first served" basis outside of Beijing and Shanghai, because of  lack of Tesla service centers across the rest of the country.  A fact which Yu says was not disclosed to him when he put down his down payment of 250,000 yuan in October of last year.

Wall Street Journal reports that when Tesla further contacted him later to say that his custom-ordered Model S had been seized by Chinese customs "because the record number on the customs declaration statement didn’t match the car’s vehicle identify number" and that his order was further delayed because of the error he became more angry.

Tesla suggested he take delivery of a showroom display car, or wait for another US-made car to be built and shipped to China.  By looking at the end result of the transaction, we can assume that solution was not entirely pleasing to Mr. Xinquan.

“I feel like I just married a woman who has been married before.”

WSJ says that China's social media reaction has been mixed.