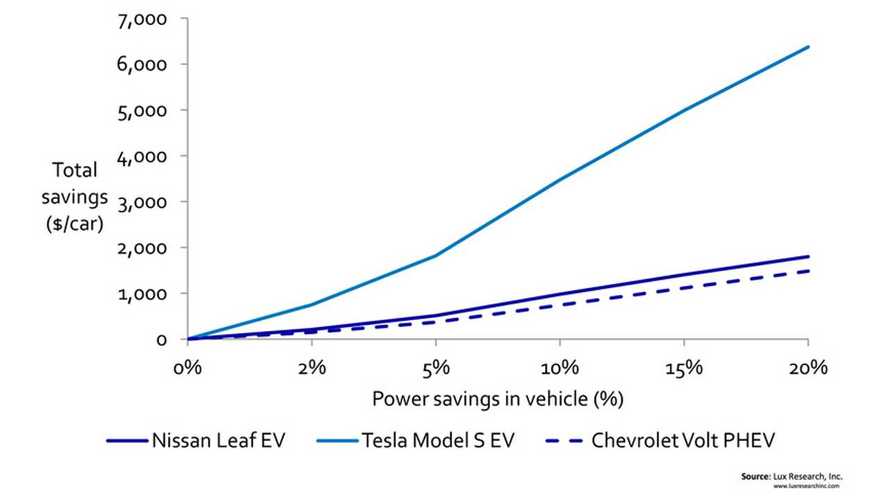 Lux Research in its latest report entitled "Silicon vs. WBG: Demystifying Prospects of GaN and SiC in the Electrified Vehicle Market" highlights the advantages of silicon carbide (SiC) and gallium nitride (GaN) power electronics, which enables a huge cost savings.

Both materials are wide bandgap (WBG) materials, which used in power electronics are much more efficient than silicon and because small losses, which always are turned into heat, the whole device can be smaller and lighter.

According to Lux Research, as early as 2020 SiC could be displacing silicon in electric vehicles (EVs).

Lux Research stated that 20% power savings on a Tesla Model S can result in over $6,000 in battery cost reductions, or 8% of the vehicle's cost.

Power electric already is very efficient (at least ~ 90%) so even reducing losses by 10 times we gain maybe 9% (plus less weight), but the high savings comes from smaller a battery pack at the same range. And because Tesla has the largest battery pack, the savings will be the highest.

Pallavi Madakasira, Lux Research Analyst and the lead author of the report, stated:

"Efficient power electronics is key to a smaller battery size, which in turn has a positive cascading impact on wiring, thermal management, packaging, and weight of electric vehicles."

Lux Research released a few predictions for commercial roll-outs of WBG-based power electronics, among which we see:

Thanks to Green Car Congress we came on the trail of a demo 6 kW silicon carbide (SiC) on-board charger for a plug-in Toyota Prius, which now is a pocket charger!

"APEI, Toyota, Cree, Oak Ridge National Labs, the University of Arkansas, and ARPA-e are working to change the face of Plug-In Electric Vehicles. This team has create a silicon carbide based battery charger, which features power capability of over 6 kWs, 95%+ efficiency, and ultra-high power density of 5 kW/L and 3.8 kW/kg. The new Level 2 isolated on-board vehicular battery charger utilizes silicon carbide power devices for application in electric vehicles and plug-in hybrid electric vehicles. The heart of the charger is APEI's 1 MHz+ high-frequency capable multi-chip power module allowing for 200 °C+ high junction temperature operation which, when coupled with high switching frequency, allows for an order of magnitude increase in power density -- with a simultaneous increase in system efficiency over currently used technologies. This new technology will translate to faster charging times and decreased dependence on fossil-based fuels for the end user."