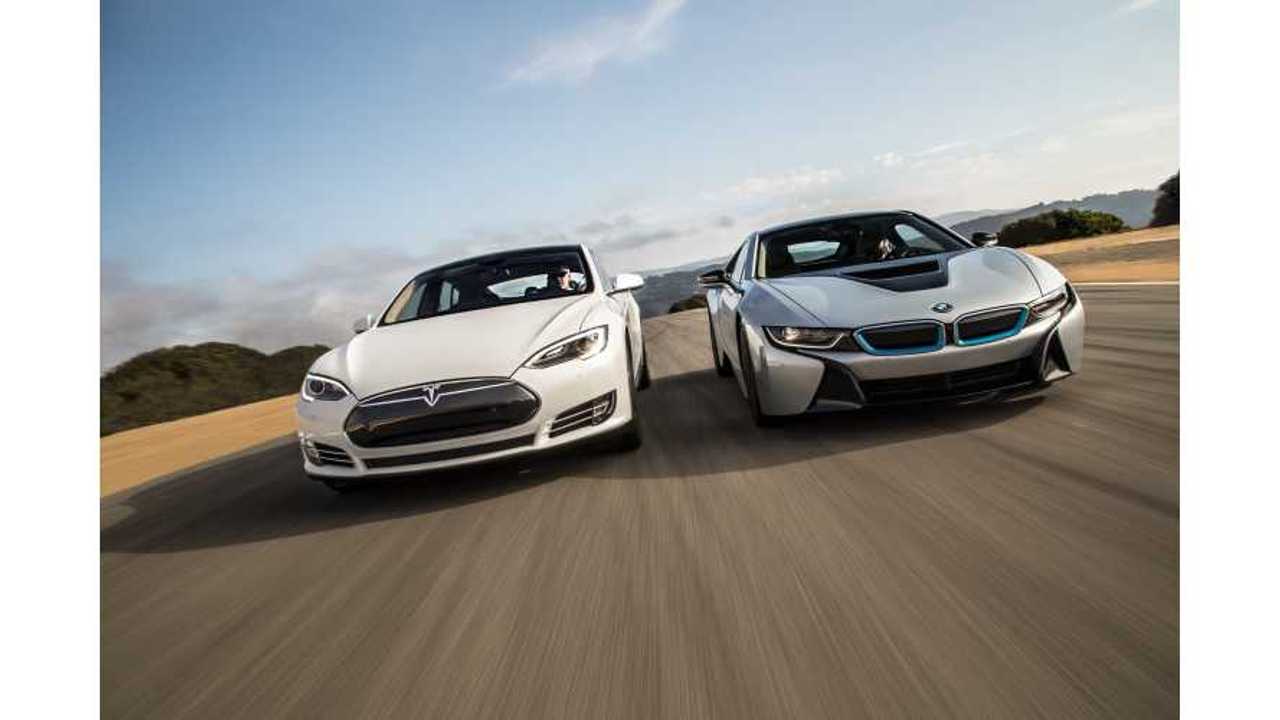 Let’s find out which one is a better car:

We’ll grant you that comparing an upright 5-7-seater with a low-slung 2+2 is unconventional, but then so are the cars. And with as-tested prices that fall within 10 percent of each other, these green-tech marvels are aimed at customers with similar demographic and psychographic profiles. Mind you, the base prices are further separated — $94,570 for the Tesla, $136,650 for the i8. But by the time a Motor Trend-grade car enthusiast runs through the Tesla options list speccing must-haves such as the $8750 performance-tuned air suspension, the $4500 21-inch gray performance-plus wheels shod in Michelin Pilot Sport PS2 tires, $2500 worth of performance seats, and a few more sybaritic options, the price can escalate quickly, as ours did, to $126,520. The i8 comes pretty fully loaded with only three option packages — Giga World ($2000 — our test sample), Terra World ($3000), and Pure Impulse World ($10,800). Each package upgrades the width of the staggered-fitment 20-inch wheels and ups the interior opulence.

It’s hard to believe that a low-slung, 3378-pound carbon-fiber car with a turbo engine, all-wheel drive, and two electric motors lugging just 9.3 pounds per total system horsepower plus six gears’ worth of torque multiplication couldn’t just run away and hide from a big, upright, 4633-pound (11.1 pounds per horse), rear-drive electric hatchback with a one-speed transmission — but in fact it can’t.

Bend them into a turn, however, and the lighter (more evenly weight-balanced) i8 takes the lead, generating 0.94 g of lateral grip to the Tesla’s 0.91. That cornering advantage allowed the BMW to carry a bit more speed through the ends of our figure-eight course, while the AWD helped it claw its way out more quickly, carrying a 4-5 mph advantage on the Model S at corner exits. This added up to a scant 0.2-second advantage (24.6 to 24.8) with a tie in overall average lat/long g at 0.80. Again, unimaginably close performance for such disparate vehicle types. Let’s give the advantage to BMW, by the slimmest of margins.

You're definitely going to enjoy reading the full comparison...