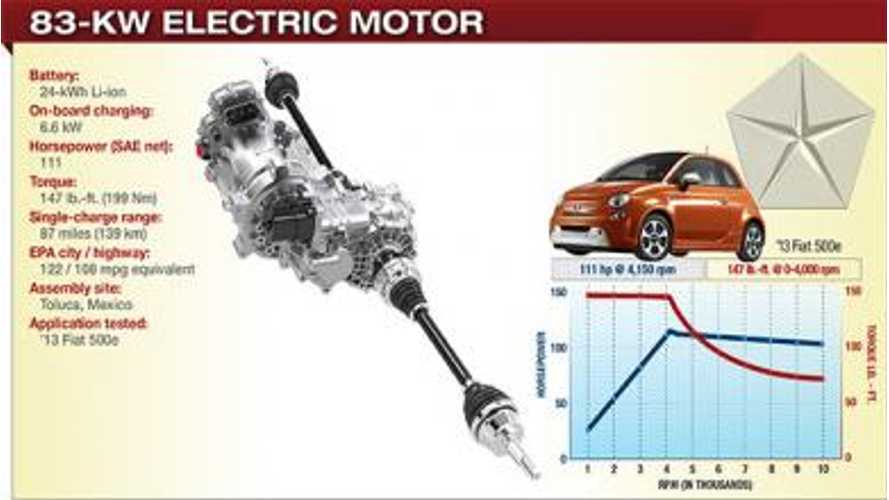 Recently, Ward’s Auto presented its story behind the choice of the Fiat 500e, which got the award despite being compliance car initially available only in California.

"Fiat Chrysler CEO Sergio Marchionne openly admits his company is doing the 500e (and future electrified vehicles) only to comply with those mandates, and that it will lose $14,000 on every 500e it leases or sells."

"But that did not discourage his 500e team from engineering and developing it to be enjoyable to drive, with one of the best available BEV powertrains. Hence our well-deserved kudos."

Some comments from the Ward's Auto team in regards to the 500e include:

The main reasons to appreciate the Fiat 500e "Engine" is low energy consumption without sacrificing performances (with 0-60 in nine seconds) and a fun driving experience.

"The conventional 500’s two most endearing qualities, styling cuteness and fun-to-drive character, have been well preserved in this EV version."

"The 500e dashes from stoplights with such confidence that even hard-hearted internal-combustion devotees will find themselves recalibrating their perceptions after a test drive."

The Fiat 500e project was conducted by Chrysler, however we believe that motor itself comes from Bosch, a company which boasted about this one year ago.

"Chrysler is the center of electrification excellence for all of Fiat Chrysler. We took the base vehicle, purchased some components from suppliers and did the conversion. We did all the design and integration work, the vehicle dynamics and aerodynamic development and the NVH character,”

"Also, the power and performance balancing was all done by us and our controls groups. There are some low-level controls that suppliers do for us, but we do the supervisory controls ourselves. In some cases, we co-designed with suppliers, but our engineers integrated the parts into the vehicle...everything that gives the car its character, the specifications of what we wanted the components to be and what the efficiencies needed to be."