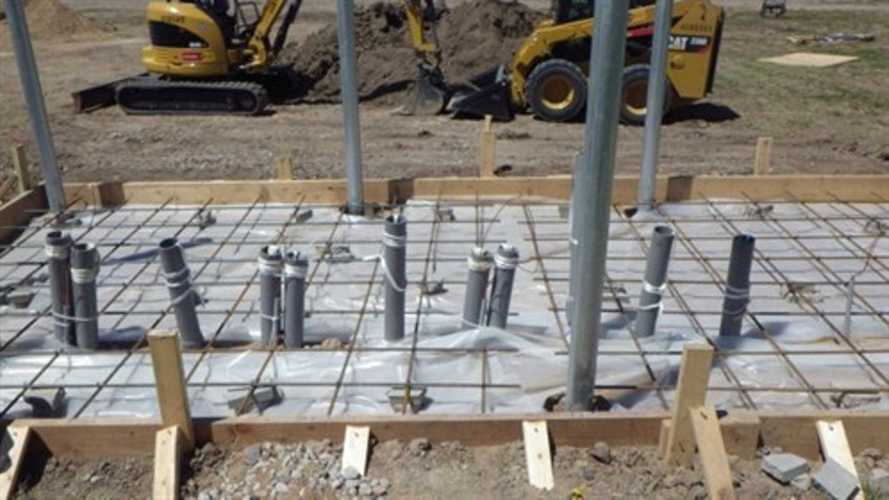 As it turns out, installing everything from the beginning to end takes 11 days (shortened to 7 minutes in the video).

"The Project Managers at Electric Conduit Construction were excited to learn that they were the successful bidder on a Tesla Superchager station. The project was located in Goodland, Kansas and was one of a chain of stations being built across the country to make long distance travel by electric vehicle a reality. Travelers can stop, plug their cars in and be ready to go again in an hour. With battery technology constantly improving this time could be much shorter in the future."

"Planning began on this project with the objective of completing it efficiently with no punch list items outstanding. This required a thorough site survey, arrangements with local sand, gravel and concrete suppliers and close coordination with our electricians. Crew logistics were arranged and the job started on May 27th 2014, in a green field next to the Holiday Inn Express. The crews worked hard to complete the project in 11 days. This kind of efficiency will help bring power to Tesla vehicles much faster than before."

"Power was brought to a transformer and pad from poles about 600’ away from the site. Electric Conduit crews poured the footings and pads for the main transformer and for Tesla’s Supercharger. The crews ran conduits to the pads and to the charging stations, pulled the wires for power and control circuits and made up all terminations."

"No detail was overlooked; the plans were followed to the letter. Each conduit and every wire was placed and terminated accurately. When the job was finished the sod was restored the site cleaned up and all systems tested to 100% functionality."

"Electric Conduit Construction was proud to have a hand in completing one in a chain of charging stations that will someday bring efficient travel by electricity to our nation’s highways."

Update:  It appears the video has been pulled by Electric Conduit Construction, and its YouTube channel is now empty.  If/when it returns online we will update the story/link.