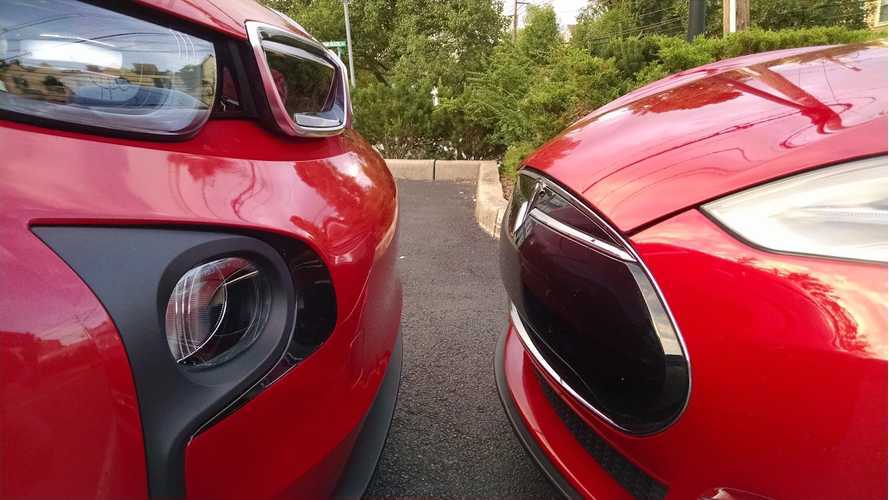 Horatiu Boeriu of BMWBLOG recently did a piece titled "BMW vs. Tesla - Which Company Is A Bigger Innovator?" in which he mentions that while both companies are competing in the premium automobile segment and are committed to electric mobility, they are taking different paths to achieve success.

I'm not going to try to analyze who has it right or who is a bigger innovator, but it's clear that both companies have chosen to focus on different aspects of their respective vehicles.

With Tesla, it's all about the batteries. Unlike every other automobile manufacturer, BMW included, Tesla's approach isn't for their electric cars to complement their lineup of gasoline and diesel offerings since they don't have any. Instead, it is to render gasoline vehicles from their competitors obsolete. In order to do so, their cars have to be at least as good or better than most features of competing gas cars; and that includes range, performance and utility.

BMW on the other hand doesn't need to necessarily worry about making everything better. They can focus on specific needs of certain customers and make a vehicle that is better than any other at a specific set of tasks, without cannibalizing sales of other vehicles in their lineup. If you accept that premise, it's not difficult to understand why we have the Model S and the BMW i3.

Tesla knew they had to knock it out of the park with their first high volume vehicle offering. They knew they had to offer a car that could stand its ground against all of the top luxury sedans while offering a range long enough to allow for road trips enabled by the Supercharger network. Even though that was an enormous task, and one that few automotive analysts really believed they would pull off, they did just that and the Model S is a smashing success.

No disrespect to the sexy styling or the fabulous performance of Model S, but the heart and soul of what the car is can be attributed to the enormous battery pack it uses, filled with industry leading, high energy-density batteries. Tesla is all about the batteries. Even though the Model S uses batteries that have a higher energy density than any other EV manufacturer, they still aren't satisfied. They aren't waiting for the market to bring them better, cheaper cells for their future cars. Instead they are in the process of building what will be the first of many Gigafactories, which will be the largest lithium ion battery manufacturing plants in the world. This will drive down costs, guarantee that they have the supply that they need, and allow them to constantly upgrade to better cells without needing to wait for battery manufacturers to retool production facilities to produce them.

The key to Tesla's success is having the best batteries available, and to manufacture them for less than what their competitors are paying for comparable cells. It's the only way to offer large battery, long range electric vehicles and be able to price them competitively. It's Tesla's edge, and perhaps their only hope to compete and actually beat the large, established automakers.

BMW's not in the battery business and is unlikely to follow Tesla's path as such. As mentioned above, since they didn't need the i3 to do everything better than any other gas offering as the Model S had to, BMW could focus on a specific set of goals with their first electric vehicle. The i3's code name was the Megacity Vehicle and the goal was to develop a car that would be the perfect electric vehicle for the increasing populations within the megacities of the world.

BMW also wanted this car to represent a departure from traditional manufacturing processes with an emphasis on sustainability. They set out to make the most efficient production car available today and they achieved that goal. The extensive use of carbon fiber reinforced plastic and aluminum allowed BMW to shave 400 to 500 lbs off the car which played a primary role in its efficiency.

Will BMW leave Tesla in their rear view camera? Seems unlikely at present.

I believe the i3 is as much of a learning experience for BMW as it is their first electric vehicle. Every step of the manufacturing process was rethought and redesigned for the i3. In fact, the i3 uses 70% less water and 50% less electricity to manufacture than a comparable-sized conventional BMW would.

In addition, the Leipzig manufacturing plant where the i3 is made is now completely powered by wind-generated energy. So as much as the i3 is an important vehicle to BMW today, the lessons learned bringing it to market today will pay dividends when future i cars are made. The i3 indeed paved the way for the rumored i5 and other models from the i brand.

You can expect larger battery, longer range electric cars from BMW i in the not-so-distant future. I suspect by the time Tesla releases the Model III, BMW will have an electric offering which is comparable size, range and price, and that will be good news for the consumer.

My i3 had a visit by its big brother. I'm one of the few lucky people outside of some select journalists who have driven an i8 on public roads. The future is definitely looking electric!

BMW knows that by focusing on a specific set of needs (efficiency, performance, sustainability) rather than long range, the i3 isn't as well suited for road trips as the Model S. They knew that every kWh of battery that they added would sacrifice efficiency and increase the cost of the car. I still maintain that if BMW had indeed used a slightly larger battery and delivered a true 100-mile EV, it would have been much better received, but that's a pointless argument now.

While it does have a shorter range, the i3 does have features that are not even available in the Model S, such as adaptive cruise control, collision avoidance with automatic braking and self parking. As you would expect from BMW, the i3 is an extremely fun car to drive, and a great addition to the current lineup of EV offerings. I think it fits in well situated directly between the Model S and the LEAF in price.

BMW did realize some customers would want a longer range so they offered the range extender as an option. It's really a great option to have and while I personally like how well it works, it isn't for everybody. Many have argued that the REx ruins the purity of an EV, and while I can agree with that, I can't agree that it shouldn't be an option. If such a feature allows more people to buy a plug in car, then I think that's great. I see the range extender as a temporary fix until batteries get better, lighter and cheaper, but a necessary evil at present.

Obviously, BMW agrees with that and unlike Tesla, they will wait for the market to bring them improved battery tech while Tesla has decided to bring improved battery tech to the market. Different approaches, different cars and I don't think either is right or wrong. They are both working on bringing cutting edge technology to market today with the promise of even better things to come. BMW and Tesla aren't going head to head in the EV space right now, but they certainly will. Competition is good because it forces innovation. Maybe Horatiu was onto something after all.

One last point: If Nissan does deliver on the rumors that the next generation, 2016 LEAF will have a 150+ mile range, and they can deliver it for a reasonable price, then both Tesla and BMW should be concerned, very concerned...