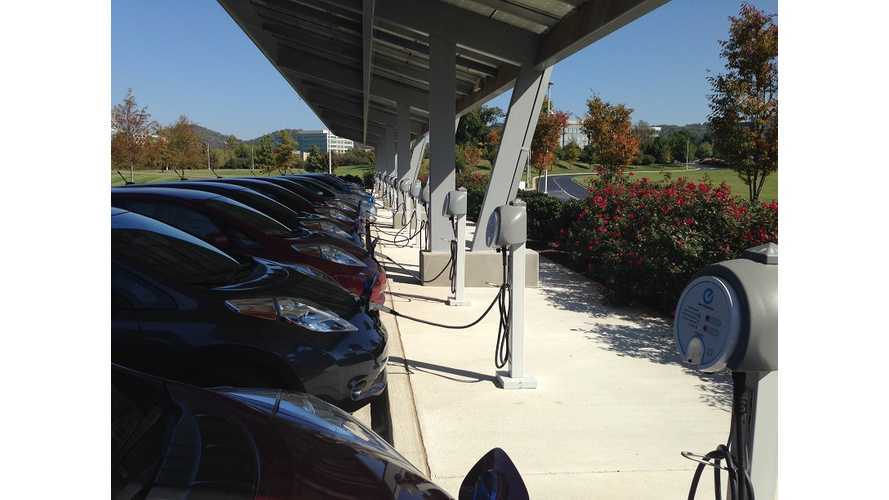 Chevrolet Volt Get A "Solar Charge" Outside GM's Hamtramck Facility

Georgia, which is second only to California in number of electric cars, is preparing to support workplace charging infrastructure installations as a critical step to encourage people to buy EVs. Having charging points on the parking lot while working virtually doubles the range.

According to the source article, in the last two years, approximately 3,000 zero emission and low-emission vehicles were bought in Georgia and the total number of EVs registered in the state is near 6,000.

"During that debate Atlanta's CBS affiliate, WGCL, reported that 3,000 zero emission and low-emission vehicles had been purchased in Georgia within the last two years. And state Public Service Commissioner Tim Echols said on the website Solar Energy USA in January that even though Georgia is the fourth-largest U.S. market for the Nissan LEAF electric vehicle, only 5,985 electric vehicles were registered in the state, compared to almost 7 million gasoline vehicles."

But other sources like ChargePoint's press release state that the actual number is much higher - over 7,000 at the end of 2013, which now after another six months could be closer to 10,000.

EV sales in Georgia are driven by the states $5,000 incentive, on top of the $7,500 federal tax credit. Those incentives have recently been saved from cessation and now something additional for infrastructure is in the works:

"Gov. Nathan Deal's administration is formulating incentives to encourage construction of charging stations, which run about $15,000 each, installed. But Georgia employers like Coca-Cola, Georgia Power, Cisco Systems and TOTO USA have already done it, either because their workers requested it or because of a corporate environmental goal. Coke has the most stations with 85, all in Atlanta."

Sarah Olexsak, coordinator of the Workplace Charging Challenge at the U.S. Department of Energy, stated:

"We love workplace charging because it is an incredible benefit of work. Plus, the company parking lot serves as a showroom where owners convince their co-workers to consider electric cars."