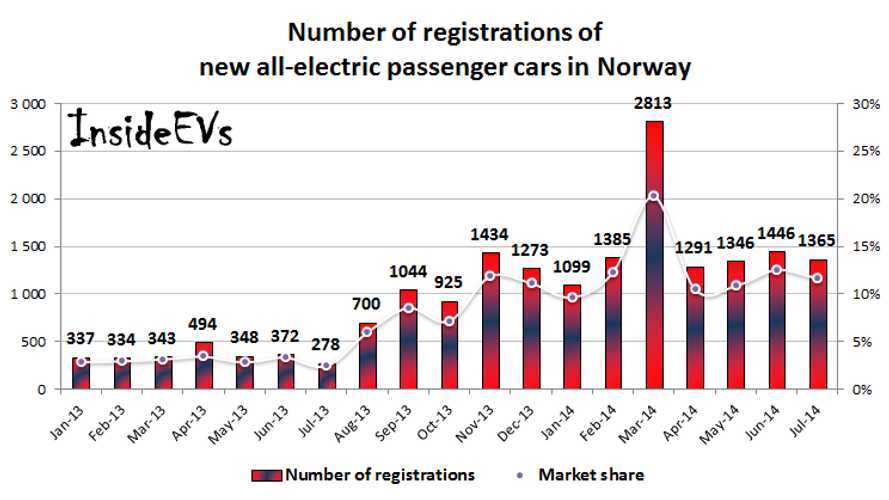 Sales of electric cars in Norway grew in July by almost 400% year-on-year.

Last month, the number of registrations of new all-electric passenger cars reached 1,365 and 11.7% market share, which was supplemented by 231 used imported EVs. In total, we see roughly 1,600 passenger EVs sold in Norway in July.

On top of that, official statistics give 23 all-electric vans (20 new, and 3 used imported). We also found that Norway had 117 plug-in hybrids (113 new and 4 used imported) registered last month.

July was the month with a big splash from Volkswagen. The German manufacturer sold the most EVs that month - 391 e-Golfs, which is more than the 313 Nissan LEAFs. Moreover, together with 282 e-up!s, Volkswagen sold total 680 EVs to become the number one brand!

Nissan however can console themselves in that Norwegians are importing LEAFs from the rest of the world in tremendous numbers - 206 in July alone. This mean that Norway had over 500 new-to-Norway LEAFs put on the roads last month.

Tesla Model S fell back to fifth having 114 registrations, but still is the overall second best-selling car in Norway YTD (3,248 units while LEAF has 2,978 and #5).

Renault ZOE scored its best result of 41 new registrations.  However, that's still 9 less than the 50 Mitsubishi i-MiEVs sold in July.

On the plug-in hybrid segment, Mitsubishi Outlander PHEV had 106 new registrations and over 900 YTD.