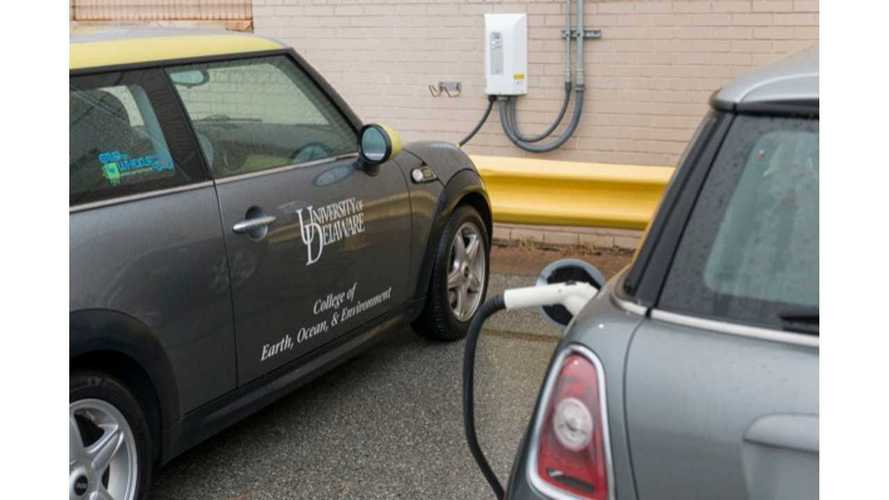 A row of Mini-E's providing balancing services for the grid

University of Delaware's (UD) EV Research Program with a small test fleet of Mini E electric cars, which on a daily basis provide electricity to the power grid for cash, now enters a new stage.

Beginning in 2013, the Mini E cars were available only to businesses and UD departments, but now Delaware residents will be able to lease the cars.

“Individual drivers are now needed to expand the demonstration over a wider range of driving patterns.”

Timeframe is set for two years at rate of $3,600 per year, but there is a bonus - because of its V2G capability, the monthly rate could be virtually lowered from $300 to $200. The $100 reduction will come from providing a small amount of electricity to the power grid when parked and plugged in during peak power usage.

"The new individual-lease cars can be used in the same manner as a personally leased car, with the addition that the cars provide electricity to the power grid when parked and plugged in. If the car is kept plugged in most times when not driving, it can earn payments back to the driver of roughly $100 per month, or $1,200 per year."

“It takes a few months to set up and receive the payments for power after the lease starts, and payments are lower if the car is not kept plugged in when parked."

Requirements for the project are a closed-in garage, charging station ("average cost to buy and install $2,500"), live in Delaware and be a Delmarva Power electric customer.

According to University of Delaware, the two-seaters have 100-mile range, but we are not sure if this figure comes from new battery packs or the original ones from previous BMW tests.

What's even more interesting is that there is still available the option of buying a eBox, converted by AC Propulsion, which we saw for the very first time several years ago. Price is $40,000 with a four-month waiting period.