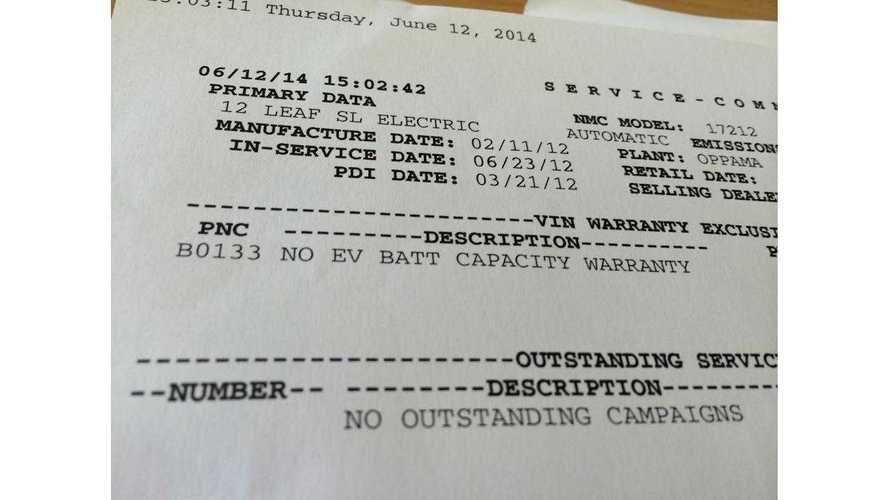 Current owners of 2011-2012 Nissan LEAF who did not take part in a "settlement deal" last year have apparently found a new notation affixed to the status of their cars.

It was almost a year ago when Nissan first made an offer (in response to a lawsuit) to owners of 2011/2012 LEAFs to provide new warranty protections covering the loss of battery capacity.  An offer which owners had to "opt-out" of if they didn't want to take part.

That lawsuit focused on the fact that Nissan did not adequately disclose that owners should avoid consistently charging the battery above 80% (especially in times of extreme temperature) to preserve the life/abilities of the LEAF’s 24 kWh battery.

As part of the settlement Nissan gets to maintain that the class action lawsuit does not have merit, but adds specific battery capacity loss triggers to its existing limited warranty (60 months/60,000 miles), something that was not present at the LEAF’s launch...but was covered from MY 2013 onwards.

This new warranty provision requires Nissan to restore at least 70% of the original capacity of the LEAFs battery during the warranty period.

The fact that the 18,588 affected LEAF owners only received what new owners already had, while in some cases still having to deal with their diminished range cars, while the two named plaintiffs got $5,000 each, and the plaintiffs lawyers pocketed $1.9 million, didn't sit too well and a fairly high profile objection was launched a few months later.

“The proposed settlement is a sham, benefiting only class counsel, named plaintiffs and Nissan. Class members are getting absolutely nothing of value... Nissan will reap waivers from 18,000+ class members whose product-defect and related claims will be barred by the proposed settlement.” – said Alex Kozinski, the Chief Judge of the Ninth Circuit Court of Appeals, and 2011 Nissan LEAF owner in his objection

Note: LEAF owners "opted in" by remaining in the class, which was default. No action was necessary.  Specifically, they did not have to sign waivers.

Jeremy Whaling, was one such owner we got in contact with, found out at his latest battery check-up that Nissan corporate added a little note (above) to his service record.

Mr. Whaling's dealership told him that it was not them who attached the note, but Nissan corporate according to the VIN of his car.

What does this all mean?  To any LEAF owners who 'opted out' it quite likely means their cars are now worth less than they were previously, as potential buyers of a used 2011/2012 LEAF would certainly not like to see this declaration.

Jeremy also wanted us to note some other issues he has been told surrounding his car:

"I can't even buy a battery if I am out of warranty.  I've never heard of an automaker rejecting my money before."

So, while offering an increase warranty as part of a settlement and adding 'that note to those cars' perhaps seems reasonable to us, taking an action that results in a punitive outcome to those who have already been harmed seems wrong to us.  Nissan has inadvertently (or otherwise) now created two classes of 2011-2012 LEAFs.

Hopefully this is just an unintended consequence of attempting to identify those with the additional warranty and Nissan will take further steps to rectify this situation.  It should also be noted that it was originally believed that all 2011-2012 LEAF owners would receive this warranty extension regardless of involvement in the settlement.

Image credit and hat tip to LEAF owner Jeremy Whaling!!!  Also check out a quite lengthy discussion on the topic at MyNissanLEAF