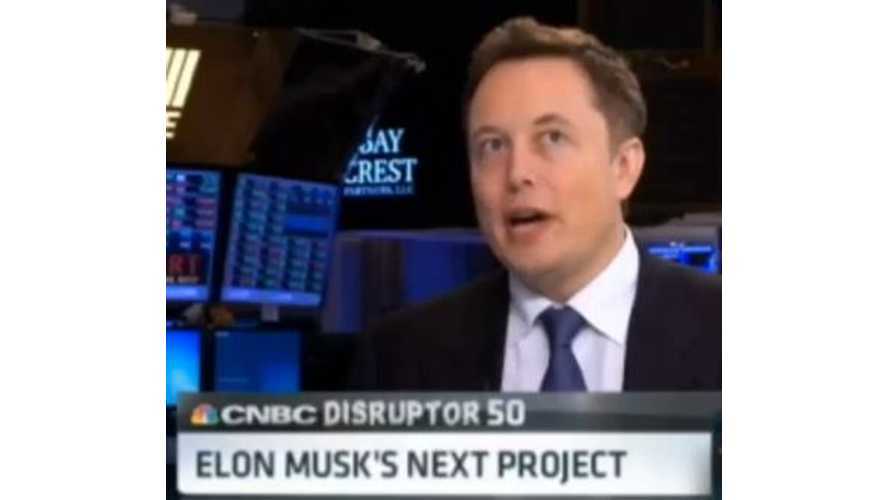 Tesla Motors CEO Elon Musk, founder and CEO of SpaceX too, recently sat down with CNBC for an interview mostly focused on SpaceX topping CNBC's Disruptor 50 list for 2014.

Points of discussion include SpaceX, SolarCity and even Tesla Motors.

Here's what CNBC says of Elon Musk and its selection to #1 of SpaceX on the Disruptor 50 list:

No one can ever accuse Elon Musk of thinking small. As co-founder and CEO of Tesla Motors, he reinvented the idea of the electric car and took the company public in 2010. Now, as founder and CEO of SpaceX, Musk's company designs, manufactures and launches advanced rockets and spacecraft, with the ultimate goal of enabling people to live on other planets.

SpaceX's founding and continued success comes at a time when private companies are entering the space market, an endeavor long associated with—and controlled by—the government. The 3,000-employee company is flying cargo resupply missions to the International Space Station under a $1.6 billion contract with NASA. Its Dragon spacecraft was designed with the intention of carrying astronauts, and now, under a $440 million agreement with NASA, SpaceX is making modifications to make the Dragon crew-ready.

The company is also delivering satellites into space for commercial customers and has booked more than 50 additional cargo and satellite flights for paying customers through 2017. Musk's plans for the future are even grander. The company is in the midst of developing the Falcon Heavy, the world's most powerful rocket, according to the company. The hope: to someday take astronauts and other humans to a colony on Mars