But historically, the real highlights happen on the conference call after the earnings are released - when CEO Elon Musk typically gives his candid view of how things are unfolding inside the company as well as his outlook to the future.

So without further ado, here is our highlights from that call!

The Tesla CEO was asked about the company's 100,000 run rate projection by the end of 2015 and how much was coming from China, splits etc.

"We're expecting that to be roughly split between the X and S. So we're talking roughly 1,000 units a week of each."

Mr. Musk also notes that looking at the wider demographics, SUVs are slightly outselling sedans in the wider market, and he expects that may also be the case for the Model X over the S at some point.

Worldwide Stores/Service Centers by end of 2015

The CEO notes that he is just "speaking off the cuff", but expects "100 in China alone" and more than 300 worldwide

Elon Musk: Not A Fan Of The FCV

Often Elon Musk likes to give his opinion on hydrogen, so when the Morgan Stanley analyst asked him the question of why the industry seems to be pushing hydrogen so much, and if it was a "bs move" by CARB to rewrite EVs rules - or did they actually believe in the tech?  The CEO let it fly again:

"As you know, I am not the biggest proponent of hydrogen...but really if you take a theoretically optimal fuel cell car and compare that to a car in production - a battery electric car; on key metrics of mass, volume complexity, cost and refilling infrastructure, it's just...it is a loss. So it's the best case in our opinion, the best case fuel cell car  (and obviously the fuel cell cars are far from best case), cannot beat the current case electric car, so well why even try it?  That just makes no sense.  Success is not one of the possible outcomes."

Follow up question from the analyst: "Why are they (CARB) doing this? That is why I asked if it's BS. Is this just kind of a diversionary tactic or do you think they are just not up on what is up?"

"We are quite confused about this."- Musk

"...also another thing - hydrogen is an energy carrier not an energy source. So you have to create the hydrogen which is really inefficient because you would either have to crack a hydrocarbon or electrolyzed water" - Musk

"Yeah - which is super inefficient, and then hydrogen has very low density.  So if you are going to pick it as a chemical energy storage mechanism, the hydrogen is a terrible choice.  At least you know, methane, CH4 lock up the hydrogen with one carbon atom or something.

Given the recent scrutiny over some drivetrain failure/replacements in the Model S, you just knew the question 'What's up with that?' would be posed to the Tesla CEO

Tesla CEO Says Many Of The Drivetrain Replacements Where Unnecessary, But Where Done For Customer Convenience

"We definitely had some quality issues in the beginning for the early serial number of cars, because we're just basically figuring out how to make the Model S.  And I think we've addressed almost all of those early (? - garbled) production cars - I mean not all - but the vast majority have been addressed in cars that are being produced today.  And we're also getting better at diagnosing what's wrong, because in some cases we, particularly with respect to the drive unit, we think that something is wrong with the drive unit but it's actually something wrong with another part of the car. And then we'd replace the drive unit and that wouldn't solve the problem because the drive unit was not the problem."

"...there's a bunch of things like that which are just mis-diagnosis of the problems that we've obviously addressed."

"There are a few items that will need - a fair number of drivetrains will need to be serviced.  It's actually related to one (problem) to the differential, and we need to shim the differential. It doesn't require drive unit replacement, it just requires a technician to insert a shim.  We are going to have to do that on a fair number of cars - but that is like a 50 cent shim.

So it's really;  I wouldn't assume that there's going to be some vast number of drivetrains that will need to replaced, but there is several service bulletins that we will be instituting, many of which we've already have to address the issue."

After speaking about weekly quality control meetings, Mr. Musk was asked if he was happy with the quality control systems in place and his team.  To which the CEO said there had been some trouble, but that they were pretty much there now.

"I think at this point we've got a excellent quality control team...and we weren't there in the beginning but I'm confident that we're there now. I mean our aspiration is on the order magnitude better quality than any other car. And we will keep at it unrelentingly until we get there."

Even before Tesla's disclosure of breaking ground in Nevada, the public had been made aware of the site's existence and subsequent work stoppage.  The question was posed to Mr Musk about the 'why' and if the company has a "drop-dead" date for being up and running.

"We have  essentially completed the pad, the construction pad for the Gigafactory in Nevada. So in terms of creating a flat pad and getting the rocky foundation that is substantially complete. There's still a little bit of work ongoing.  We are going to be doing something similar in one or two other states - which is something I previously said we'd do because I think it makes sense to have multiple things going in parallel.

Before we actually go to the next stage of pouring a lot of concrete though we want to make sure we have things sorted out at the state level - that the incentives are there that makes sense,...But I do want to emphasize that Tesla is not going to go for a deal that is unfair to the state or unfair to Tesla. We want to make sure it's compelling for all parties.   I think on the Nevada side, at this point the ball is on the court of the governor and the state legislature." 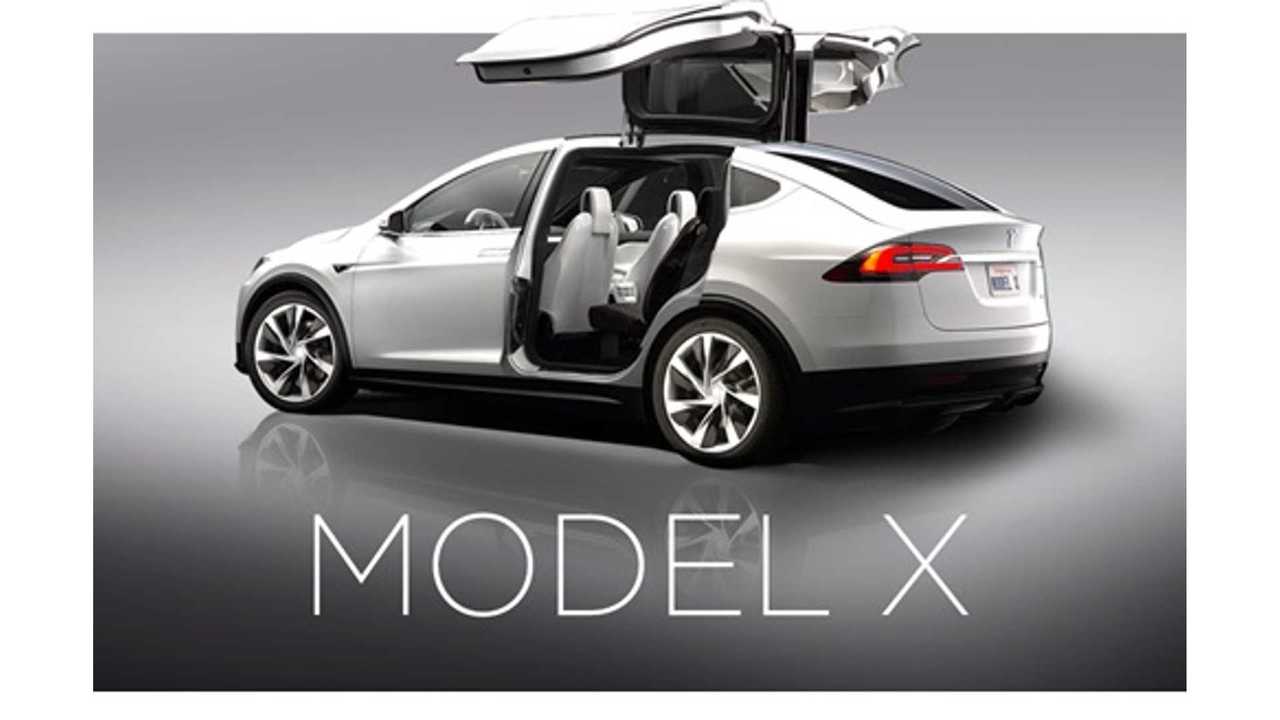 No Deliveries Of The Model X In Q1 of 2015, But High Production Levels Expected In The Spring

Knowing he is unlikely to get a straight numerical answer on Model X demand, the analyst from JP Morgan asks the Tesla CEO to put Model X backlogged orders in context of what the company was seeing with the Model S in 2012. And what the demos were as to location and if many already owned a Model S.

"I guess what is important to appreciate for the X, that, let's just put the orders in context. There are no cars available for a test drive. There is no information about the cars in our stores because we are only selling the S.

In fact, if somebody comes in who wants to buy the X, we try to convince them to buy the S,  so we anti-sell it.  We don't really provide all that much information or details about the car or provide a definitive date on when you can get it. Despite all that, there is huge demand from around the world for the X.  Now I think that actually people are right, even though they don't ...  really have enough information to know they're right, but they are."

Will Gigafactory Batteries Have A Different Chemistry?  Improvements?

"The cathode and anode materials themselves are next generation, so I mean we're seeing improvements in the maybe 10% to 15% range on the chemistry itself (energy density) - and then we're also customizing the cell shape and size to further improve the cost efficiency of the cell and the  packaging efficiency."   - JB Straubel (CTO)

"We've done a lot of modeling trying to figure out what's the optimal cell size. And it's really not much, it is  not a lot different from where we are right now, but we're sort of in the roughly 10% more diameter; maybe 10% more height. But then since the cubic function effectively ends up being, just from a geometry standpoint, probably a third more energy for the cell,well maybe 30%ish - then the actual energy density per unit mass increases"

"Fundamentally the chemistry of what is inside is what really defines the cost position though. It' is often debated what shape and size, but at this point we are developing basically what we feel is the optimum shape and size for the best cost efficiency for an automotive cell." - JB Straubel (CTO)

Costing on the battery cells is further discussed, and Mr. Musk notes that he would be "disappointed if it took us 10 years to get to $100 a kilowatt-hour pack."

Big hat tip to InsideEVs contributor Josh Bryant for his help in getting this out!