BMW i3 Versus Nissan LEAF 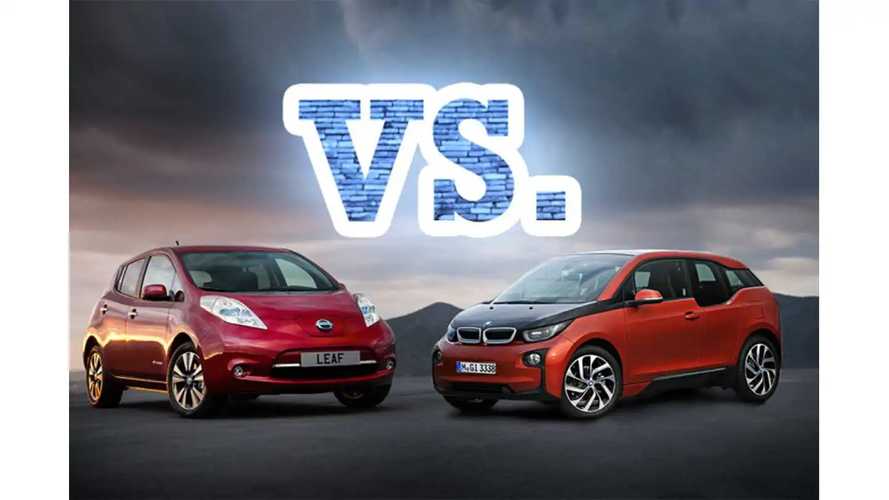 Worldwide, Nissan Leaf is already the best-selling electric car in history, with more than 110,000 sold globally since December 2011. The BMW i3 went on sale earlier this year and BMW is currently working at full capacity to fulfill the requests.

In Europe, the Leaf is officially rated at 123 miles but recent tests showed real life range to be around 90 miles. Same tests report on the i3 having a driving range of 105 miles from a 22 kWh battery pack.

But how do the two electric vehicles fare against each other? Here is an excerpt from their review:

Both cars feature illuminated charging sockets, helping to take the strain out of plugging in at night, plus they can be charged to 80 per cent capacity in between seven and eight hours when using a standard household socket.

However, if you’ve got an off-road parking space, then a powerful wall-mounted charger will be a better bet. Nissan uses the free British Gas unit, but you’ll pay £315 for BMW’s i Wallbox.

The BMW has the upper hand when it comes to interior room. Its neat pillarless door opening makes for easy access to the back seat – although the wide, carbon fibre door sill will be a hurdle for some. Light materials and large windows also help make the i3’s cabin feel brighter and more airy than its rival’s more traditional interior.

Mainstream manufacturers are embracing electric cars, but the used trade is less convinced about their long-term appeal. Our experts predict the BMW will hold on to just 30.8 per cent of its value after three years, while the Nissan will retain a woeful 26 per cent.

Check out the link below for the verdict.  As expected, the BMW i3 comes out on top, but you'd be surprised to learn that the black mark on the i3 is its handling, while the LEAF gets praise for having refinement on par with the i3.