All Electric Infiniti LE Back On Production Radar - But Just Barely 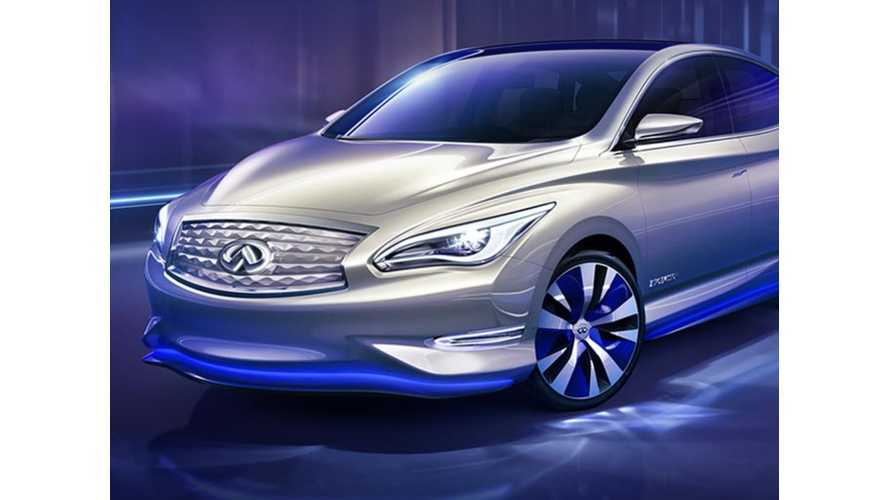 After debuting in concept form at the 1964 New York World's Fair alongside Walt Disney's Carousel of Progress, the all-electric Infiniti LE is once again officially confirmed for production after experiencing just a few delays.

Ok, perhaps it didn't debut that long ago...it just feels like it.

The Nissan LEAF based all-electric Infiniti did actually debut in New York...but it was April of 2012.

By June of 2012, and after speaking with a Infiniti representative, we had a start of production target for the LE of  "15 to 18 months".

Obviously that target was never reached and the Infiniti (along with its microsite) went it into a state of limbo.  Since then, new rumors of when (and if) the car would be made have surfaced often.

Most recently, Andy Palmer - who just took over the 'boss duties' at Infiniti on a temporary basis (Mr. Palmer also serves as Nissan's executive vice president/Chief Planning Officer), estimated that the LE would “go on sale close enough to be counted” as part of the company's Power 88 program, so on or before March 31, 2017.

Now comes word via Automotive News that the much-anticipated LE is indeed on Infiniti's production schedule!  Unfortunately it has a very loose debut timeline of 2017-2018.

"LE: Infiniti's postponed electric sedan, originally scheduled to launch in 2014, is back in the product plan. Now being eyed for 2017-18, the EV will share an architectural platform with the Nissan Leaf but have a unique body design and luxury interior. It also will come with a next-generation battery range beyond the current standard of approximately 90 miles." - Auto News

The Infiniti LE is expected to have an all-electric range of about 130-150 miles when it does eventually hit the market.