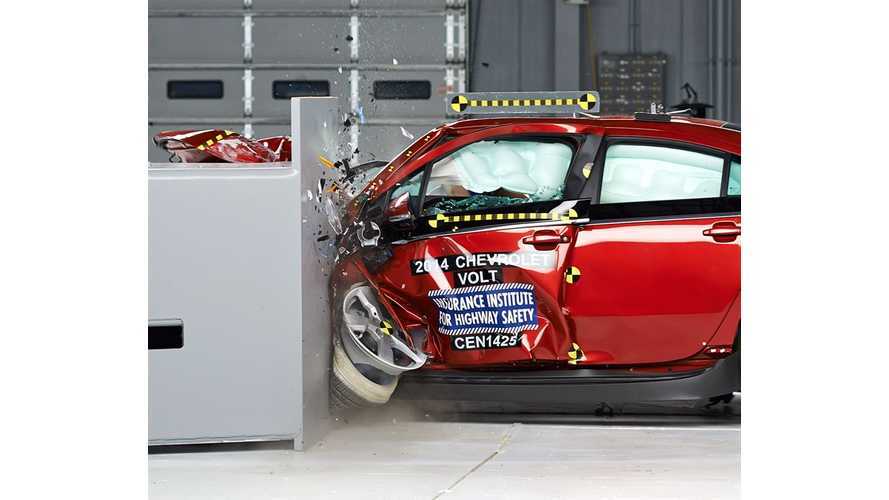 Chevy Volt Is Currently #1 In IIHS Tests For Small Cars

"Back in 2011, the Volt and Leaf were the first mainstream plug-in electric models to undergo IIHS crash test evaluations. The 2011 models earned top ratings in the moderate overlap front, side, head restraint and roof-strength evaluations.  That's still the case with the 2014 versions of both cars."

But only one of the two performed well in the new small overlap test conducted by the IIHS:

"Electric vehicles have a unique challenge in the small overlap test because of their heavy batteries. The Volt performed reasonably well, earning an acceptable rating, while the Leaf struggled."

Here's what the IIHS says of the condition of both the Volt and the LEAF after the tests:

"Driver space in the Volt was maintained reasonably well in the test, and injury measures taken from the dummy indicate a low risk of any significant injuries to a person in a similar crash. In the Leaf, the dummy had a different experience. The Leaf chalked up as much as 16 inches of intrusion in the lower occupant compartment and 14 inches in the upper occupant compartment. The instrument panel, parking brake pedal and steering column were all pushed back toward the driver. Injuries to the left knee and left lower leg would be likely in a crash of this severity, and injuries to the left thigh would be possible."

Most notably, the 2014 Chevrolet Volt is the only tested "small car" to receive the coveted Top Safety Pick + score from the IIHS:

"The Volt, which has a basic-rated optional forward collision warning system, is the only car in this test group to earn a 2014 Top Safety Pick+ award. The C-Max Hybrid, Countryman, Mitsubishi Lancer, and the Scion FR-S and its twin the Subaru BRZ qualify for Top Safety Pick, the Institute's second-highest award. These models miss the "plus" award because they don't have an available front crash prevention system."

So, if you're looking for a "small car" and it having the Top Safety Pick + rating is important to you, then there's only one choice: 2014 Chevy Volt.

The dummy's position in relation to the door frame, steering wheel, and instrument panel after the crash test indicates that the driver's survival space was maintained reasonably well.

The driver's space was maintained reasonably well, and risk of injuries to the dummy's legs and feet was low.

During the crash, the dummy's head and torso barely contacted the frontal airbag before sliding off to the left. The side curtain airbag extended far enough forward toward the A-pillar to protect the head from contact with forward side structure.

Only small car of 12 in recent testing to earn distinction

The results in the most recent round of testing put it ahead of its competitors, both in the electric and small car segments.

“The Volt’s crashworthiness performance puts it in the top tier for small car safety,” said Joe Nolan, IIHS senior vice president for vehicle research. “GM should be commended for the Volt’s performance in the small overlap front test because this car was designed before that challenging test was introduced.”

The Volt earned a “good” rating – the highest the IIHS awards in its tests – in four of the six categories monitored during the small overlap front test. In the Structure category and the Restraints & Kinematics category, the Volt earned an “acceptable” rating. Altogether, the scores gave the Volt an overall acceptable rating in the test.

“These outstanding results demonstrate our commitment to the highest levels of safety performance in our vehicles,” said Jeff Boyer, vice president of GM Global Vehicle Safety. ”Achieving the IIHS Top Safety Pick + is a key endorsement which is valued by our customers.”

According to IIHS, the small overlap front crash test is considered the most difficult of any of the head-on tests performed by either the National Highway Traffic Safety Administration or the IIHS. It was introduced in 2012, and replicates a collision with another object, such as a tree, on the very front corner of the vehicle at 40 mph.

This means the vehicle’s front bumpers and crumple zones are avoided, making the rest of the car distribute crash energy.