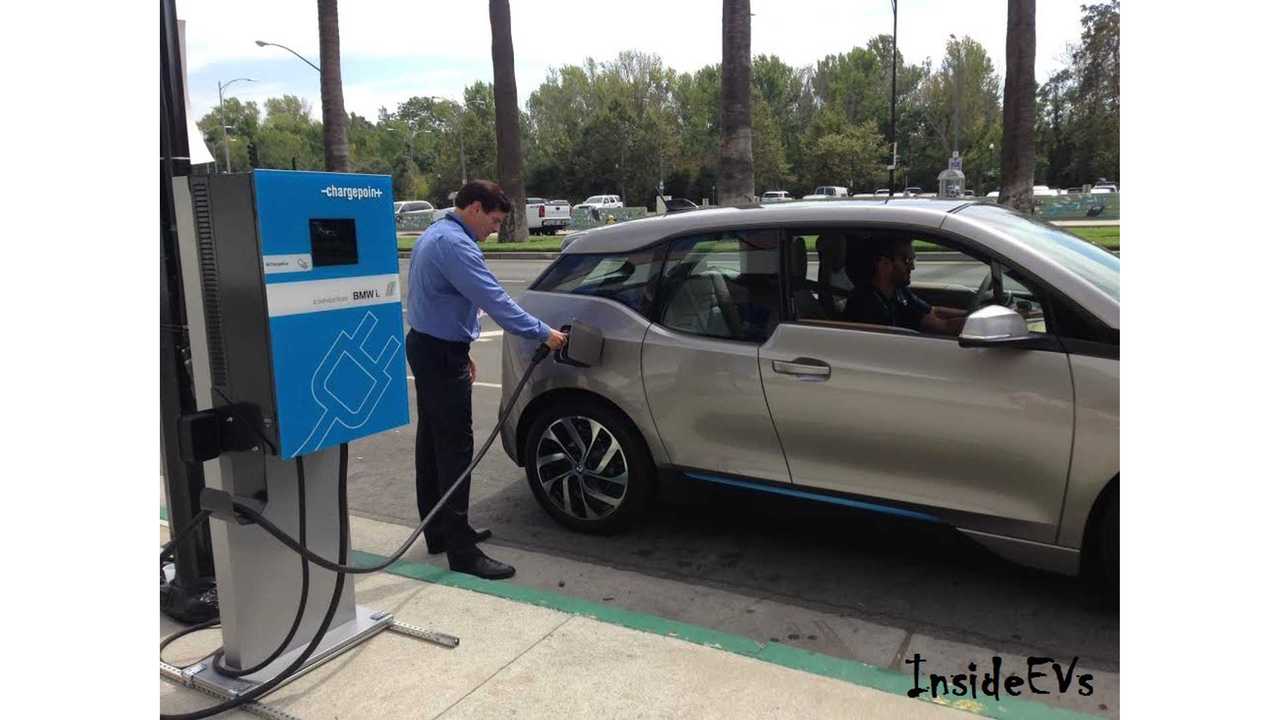 Today from Plug-In 2014 in San Jose, BMW announced a new DC fast charging unit that can top up an all-electric i3 to 80% in about 30 minutes.

BMW i DC Wall Box, About A Fifth The Price Of A Traditional Fast Charger

Why is that significant?

Well, acquiring and setting up a conventional DC fast charger is a very daunting proposition.   They are traditionally very large units (BMW likens them to refrigerators), very expensive (costs upwards of "tens of thousands"), are difficult logistically to get installed, but also draw a lot of extra power that most EVs really don't need and/or can handle.

The  BMW i DC Fast Charger developed with Bosch Automotive Service Solutions is nothing like that.

“This is a milestone in the development of the DC fast charging infrastructure. With more than five years of real world experience, we understand that a robust network of publicly available DC Combo Fast Chargers is a key part of the mobility of tomorrow.

BMW is offering the BMW i DC Fast Charger at an appealing price point, and more manageable size, to make the convenience of DC fast charging more accessible for BMW i3 owners.” -  .

It should be noted that as BMW is a CCS (Combo) partner, this unit uses a SAE Combo 1 Inlet.  This new unit should go a long way in aided the newer standard make a dent in the CHAdeMO dominated landscape.  GM, Ford, Chrysler, Daimler, Volkswagen, Audi and Porsche have also signed on to the new standard.

BMW says the unit will function normally in a wide range of weather temperatures, from -40°F to 185°F.  Expect to see the first units show up next month at BMW's "i Dealers" - which make up about 85% of the 34o dealers in the US

The BMW i DC Fast Charger is already ChargePoint network-enabled, which means you can use their ChargePoint or ChargeNow Card.

Separately,  BMW announced that when using the new ChargeNow cards, BMW i3 drivers will also get 30 minutes of free charging as part of the "ChargeNow DC Fast Program" at  participating eVgo Freedom Station sites equipped with DC Combo Fast Charging in California through 2015.

“We’re confident the rapidly-expanding NRG eVgo DC Fast Charging network will provide significant benefits to BMW i3 drivers in California. With the cooperation between ChargePoint and NRG eVgo, ChargeNow DC Fast brings us closer to the reality of one card, one account public charging network interoperability,” continued Mr. Healey.

The first BMW i DC Fast Charger is display at Plug-In 2014 happening now at the San Jose Convention Center.   And because we just happen to be at the event, we have some shots we took of the unit in action...as well as Mr. Healey operating them.