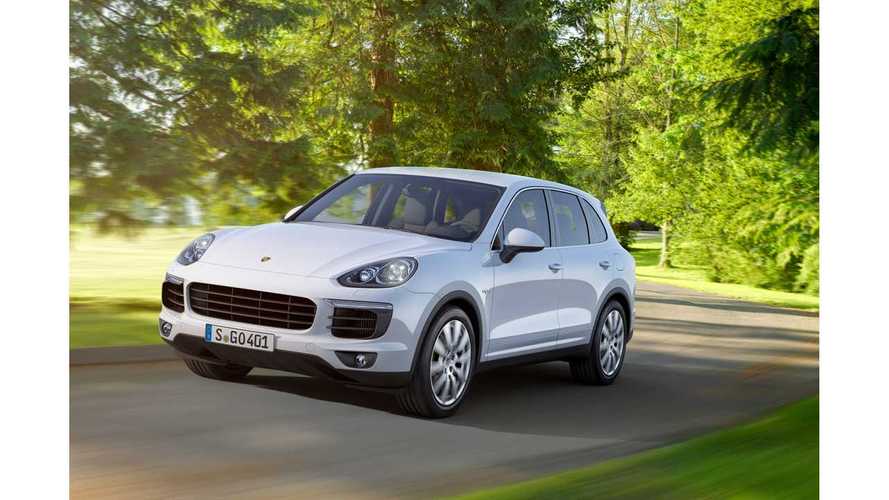 Once again, Porsche has surprised us by offering a relatively cheap plug-in hybrid version of one of its existing models.  Cheap is relative here, as no Porsche qualifies as being cheap, but the clear winner in terms of bang-for-buck in the Cayenne lineup is now the plug-in hybrid version.

Like the Panamera S E-Hybrid, the upcoming Cayenne S E-Hybrid carries almost no premium over a comparable ICE Cayenne.  What's a comparable ICE Cayenne? Well, it's not the Cayenne S, which is less powerful and less loaded than the S E-Hybrid and it's not the Cayenne Turbo, a beast of a machine with all the bells and whistles.  So, it's somewhere in between and that's where Porsche priced it.

Here's the pricing breakdown for the all-new Cayenne lineup:

Porsche is proud to announce that with the U.S. launch of the Cayenne S E-Hybrid, it will become the first automaker to offer three PHEVs in the US:

"The new generation of the Cayenne will be launched in four versions in the United States: Cayenne Diesel, Cayenne S, Cayenne Turbo, and the world premiere of the Cayenne S E-Hybrid, which is the first plug-in hybrid in the premium SUV segment. This model, together with the Panamera S E-Hybrid and the 918 Spyder, make Porsche the world's only car manufacturer to offer three plug-in hybrid models."

Are there still naysayers out there who believe VW Group isn't committed to plug-in vehicles?  You do know that Porsche is part of VW Group, right?  In fact, VW Group now offers more plug-in vehicles than any other automaker/automotive group in the world.

We believe that the S E-Hybrid version of the 2015 Cayenne will launch in the U.S. well before the end of 2014, making it the first plug-in SUV sold across the United States and, in the process, beating the Tesla Model X to market by several months and the Mitsubishi Outlander PHEV by - who knows how long?

Here's the portion of the Porsche Cayenne press release that refers to the S E-Hybrid:

The Cayenne S E-Hybrid is the first plug-in hybrid in the premium SUV segment. The technical progress made here is immense compared to the previous Cayenne S Hybrid. The new model has a lithium-ion traction battery with an energy capacity of 10.8 kWh, which enables pure electric driving. The power of the electric motor was more than doubled, from 47 hp to 95 hp, resulting in an all-electric top speed of 78 mph. Combined with the 3.0 liter supercharged V6 (333 hp), a total system power of 416 hp at 5,500 rpm and a total system torque of 435 lb.-ft. from 1,250 to 4,000 rpm is available. This enables driving performance on the level of a sports car: zero to 62 mph in 5.4 seconds and a top speed of 151 mph. The traction battery can be charged from the electric power grid or while driving. Porsche Car Connect is standard on this vehicle, and allows the driver to pull relevant vehicle data from a smart phone.

The hybrid tradition at Porsche extends back to 1899 and the Lohner Porsche – the world's first vehicle to have a battery-powered electric drive as well as a combustion engine, which was designed and built by Ferdinand Porsche. In the current model line-up, the Panamera S E-Hybrid is setting standards worldwide as the first plug-in vehicle of the premium class. The Cayenne S E-Hybrid is now transferring this forward-looking technology to the premium SUV segment. Extraordinarily powerful hybrid technology has also already been implemented in a sports car, in a super sports car no less – the 918 Spyder. This car serves as an example of technology transfer from motorsport to production cars. The most advanced form of hybrid drive technology is currently implemented in the 919 Hybrid, and it is also being studied for production vehicles.