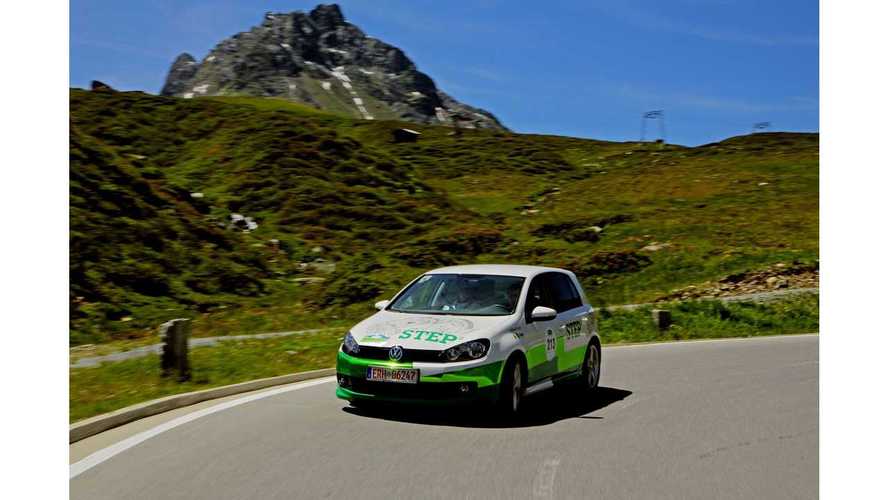 Last month, Schaeffler presented its STEP2 electric concept car at the Silvretta E-Rally in Montafon, Austria, the vehicle is equipped with a 2-speed powershift transmission and a drive unit from Schaeffler subsidiary IDAM.

This year, Schaeffler was demonstrating how a 2-speed transmission can increase efficiency of an electric car.

"With a two-speed gearshift system, a low ratio for high tractive force and a high ratio for good overall efficiency also at high driving speeds, we offer higher dynamics and at the same time we achieve a longer range of electric operation."

According to the press release, the Silvretta E-Rally STEP2 was more efficient by approximately 6% compared to a similar vehicle with only one gear.

For a typical EV with 80 miles of real world range, 6% translates to about 5 miles of additional range (or alternatively a smaller battery pack could be used to achieve the same range). For a 200-mile EV, 6% would increase the range by some 12 miles.

"In simulations and test drives, the STEP2 concept vehicle has already achieved a significant reduction in consumption (as energy withdrawn from the battery) of around six percent compared to a comparable vehicle with only one gear. STEP2 is based on a volume-produced compact car. Schaeffler engineers removed the internal combustion engine, the manual six-speed transmission and the fuel tank. The front axle was also modified but the wheels, brake system and steering system were left in original condition. The electric motor was supplied by the Schaeffler subsidiary IDAM (INA – Drives & Mechatronics GmbH & Co. KG), the specialist for direct drive technology. As an electric vehicle, the Schaeffler STEP2 is now driven by an electric motor, which can be coupled with two ratios via a transmission. The transmission comprises a planetary gear set, wet multi-disk clutch, band brake and a lightweight differential. The first and second gear ratios are produced in the transmission by a lternately closing the brake and clutch. The vehicle`s battery is located in place of the fuel tank and exhaust gas system below the passenger cell. The Schaeffler STEP2 has a system output of up to 70kW (peak) and 50kW in continuous operation."

"Schaeffler`s engineers from the electric mobility sector gained further findings under actual alpine driving conditions during the three alpine stages and demonstrated in the field of mainly standard electric cars that the use of a transmission leads to even greater efficiency savings in terms of kilowatts, volts and amperes. The electric mobility sector at Schaeffler is involved in the development of solutions for all future mobility concepts and with its research and development work for and in collaboration with customers makes a valuable contribution to the mobility of the future."