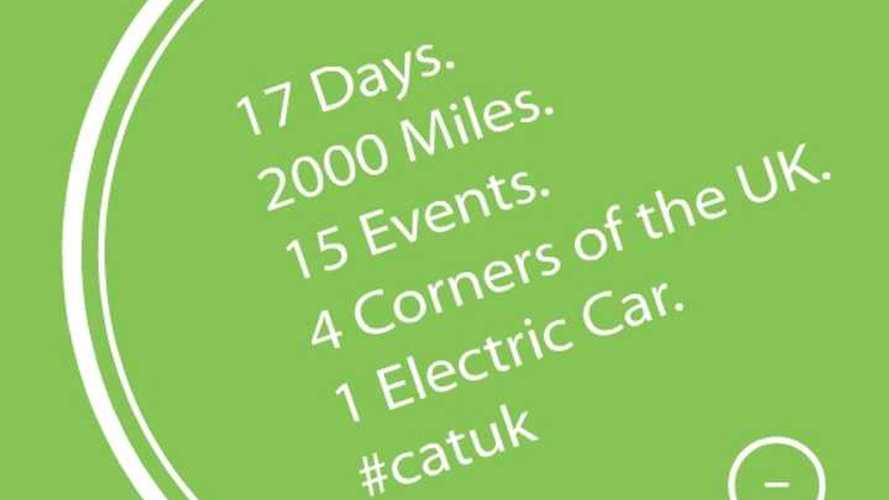 “Charging Around the UK” (CATUK) campaign by POD Point

POD Point, a company that specializes in electric vehicle charging and is a supplier of EVSE, joined forces with Renault to launch in UK “Charging Around the UK” (CATUK) campaign.  The campaign kicks off today, June 12.

The goal is to host 15 major events around UK in 17 days, covering 2,000 miles in a Renault ZOE. The French electric car will be charged on the route by the POD Point team, even in as little as 30 minutes using 3-phase 43 kW stations.

"As the undisputed leader in European electric vehicle sales, Renault is poised to spark yet more interest in zero-tailpipe-emission transport as its ZOE supermini drives an arduous 2,000 miles around the UK in just 17 days."

"Organised by leading charging infrastructure provider, POD Point, ‘Charging around the UK’ (CATUK) sees Renault as the main sponsor of a new UK charging tour. Kicking off on 12 June in London, the tour will take in 15 towns and cities, as well as several corners of the UK, including John O’Groats and Lands End, before finishing up in key green city, Brighton. Along the way, it will be using a variety of charging sources and locations, ranging from gyms, residential, supermarkets, petrol stations."

"Renault is not only supplying one ZOE for the tour, it is also displaying one at the launch site, Ripley’s Believe It Or Not!, in the heart of Piccadilly. It will will also host four events of its own. Through its dealerships, the innovative French brand will be laying on entertainment and activities in Bath (21 June), Bristol (22), Cardiff (20) and Newcastle (13). ZOE will also be taking to BBC Top Gear’s infamous Dunsfold track en route. Minus the Stig. Capping it all is the chance to win a tour of the Red Bull Racing team’s Formula 1 HQ in Buckinghamshire, through a Facebook competition which has recently launched. Full details are available at the following link:"

“We’re pleased to be supporting the Charging around the UK campaign. ZOE has the longest range of any affordable, mass market electric vehicle. It’s quiet, refined and nippy too, so it’s the perfect companion for such a long road trip. The average supermini covers 8,000 miles in a year, so for ZOE to be tackling a quarter of this distance in just two weeks, will show just how viable it is as an alternative to fossil-fuelled transport.”

“With CATUK we’re showing that EV drivers need not fear range anxiety, as they can build up their own unique POD Point charging chain. By choosing the location of their charging points, they don’t need to alter their daily routine, which is great for their travel plans. My vision is to install a POD Point wherever you park your electric car, by building an extensive network of Pod Chains we’re eliminating range anxiety.”

Detailed info on CATUK can be found in this presentation.