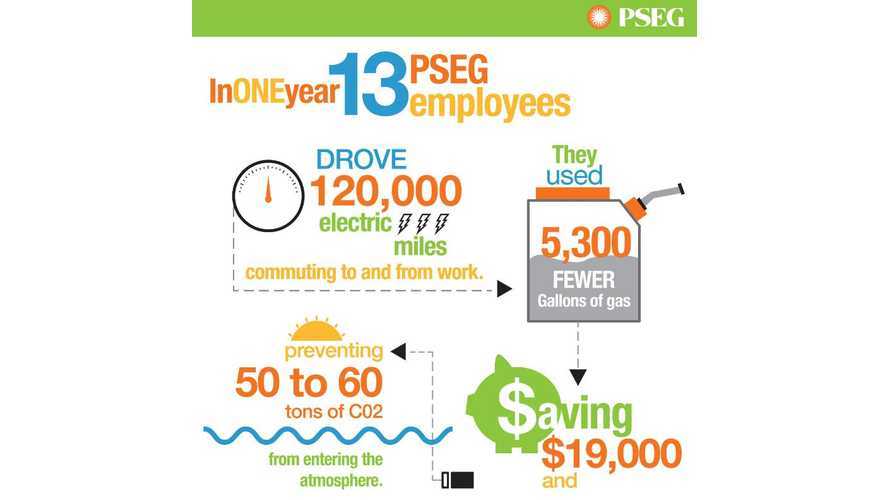 PSE&G will provide approximately 150 smart charging stations (on a first come, first serve basis) to companies that secure a commitment from a minimum of five employees who will use an electric car for their commute.

If your company is located in PSE&G's electric service territory, then you'd best contact PSE&G fast at EVworkplacecharging@pseg.com.

According to the press release, the goal for this program is to encourage New Jersey businesses to provide employees with electric car charging at work, foster greater adoption of electric cars, help to improve the state's air quality (more than half of electricity produced in New Jersey comes from nuclear energy), help companies achieve sustainability targets, reduce costs for employees and help America become more energy independent.

"Our company believes there is a strong future in electric cars here in New Jersey, and workplace charging is a critical part of that future. We want to be a partner with New Jersey businesses and New Jersey electric car drivers. Electric cars not only benefit the environment, but are cheaper to own and operate than conventional cars."

"Electric vehicle charging is usually a matter of hours, not minutes, so charging your EV while you are at work is an ideal solution," said . "At work charging will make EV ownership possible for many more people. It is especially important for apartment dwellers who cannot easily charge while at home."

Here is some data from the first year of operation of its own employee electric car incentive program launched in 2013: