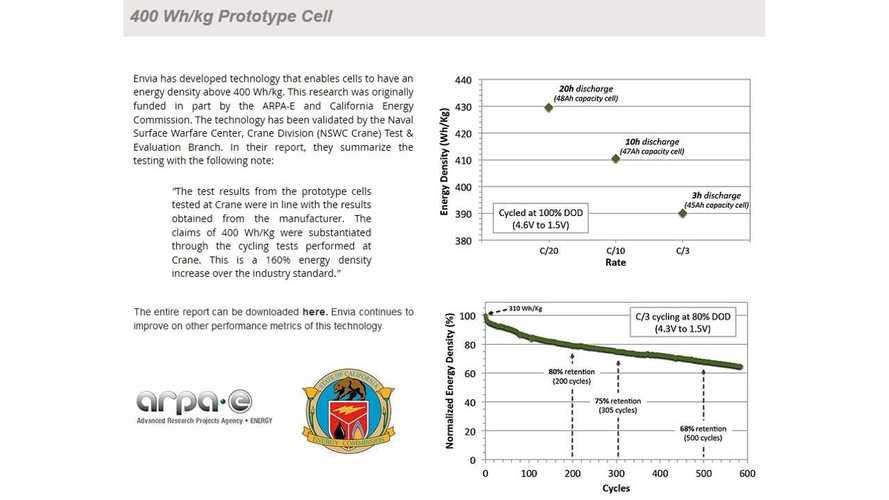 After developing lithium-ion battery cells with energy density of over 400 Wh/kg, followed by some strange scandal and lawsuits and more lawsuits, it seems that Envia is moving forward with developments together with the DoE, who recently awarded company $3.8 million with goal of exceeding 200 Wh/kg and now the USABC with another $7.7 million with a goal of 350 Wh/kg on the cell level.

It's hard to understand where all this taxpayer money is going as once the promised Envia-developed high energy cells should be on market already. Instead, we almost monthly see new projects with different energy density goals.

Let's start with first graphic from Envia's website to see what it really developed. Envia claims roughly 430 Wh/kg energy denisty for 48 Ah cell at 100% DOD cycles between 1.5 to 4.6 V. However, this is available at a very low power level C/20, which means that discharge takes 20 hours! We believe that even with such low power, the cycle number which the cell can withstand must be low. 390 Wh/kg is available for C/3 current, which is better but still we don't know how long it would last.

We could cautiously assume that this result was achieved at optimum temperature, without pulse discharge current or fast charging, which makes such cells probably much less capable in real-world life. In an electric car, it's losing almost all of its advantage of higher initial energy density.

After two years since Tesla Model S production, we strongly believe that Panasonic cells (probably 200-250 Wh/kg according to some sources) can withstand at least a few hundred cycles without such capacity drop and with high power density as car can be quick charged multiple times a day.

Where is the Envia breakthrough then? Maybe this is the answer why instead of commercialization we see more and more government-funded projects.

Let's get back to The United States Advanced Battery Consortium LLC (USABC), which is a collaborative organization (a subsidiary of the United States Council for Automotive Research LLC (USCAR)), established in 1992 and operated by Chrysler Group LLC, Ford Motor Company and General Motors (GM and Envia again?).

"The 36-month lithium ion layered-layered cathode/silicon based anode program will focus on the development of high-energy cathode and anode material appropriate for vehicle applications and the development and scale up of pouch cells that exhibit performance metrics that exceed the minimum USABC targets for electric vehicles."

“We are pleased to announce the award of this contract to Envia Systems as part of USABC’s broad battery technology research and development programs. These programs are essential to advance the technology needed to meet both near- and long-term goals that will enable increasingly efficient and affordable vehicle electrification.”

So, what do you think Envia is actually up to these days?