QUANT e-Sportlimousine Approved for Use on Public Roads 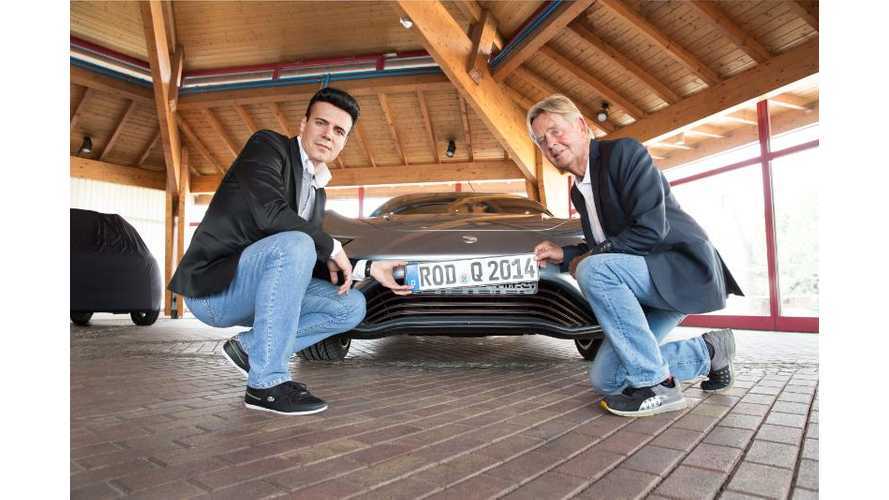 nanoFLOWCELL, after introducing the QUANT e-Sportlimousine in Geneva a few months ago, made another step by getting approval for use on public roads in Germany and the rest of Europe. This is the first ever  car with flow cells to be allowed to drive on public roads.

New readers we recall that flow cells are batteries, but besides the standard option of charging and discharging, it has two separate electrolytes, which could be pumped out and fresh electrolyte (charged) pumped in (yes we know that this leads to another standard and infrastructure network).

The first QUANT e-Sportlimousine demonstrator will soon hit the streets. nanoFLOWCELL is working hard on homologation for series production.

According to the press release, after its world premiere in Geneva, nanoFLOWCELL got strong feedback from the automotive industry and now optimistically looks into the future.

Commercialization of cars featuring flow cells, with range of more than 600 km and awesome levels of performance (top speed of over 350 km/h, acceleration from 0-100 in 2.8 seconds and a torque of four times 2,900 Nm) would be a small earthquake in alternative fuel industry.

"This is a historic moment and a milestone not only for our company but perhaps even for the electro-mobility of the future. For the first time an automobile featuring flow-cell electric drive technology will appear on Germany's roads. Today we have put the product of 14 years' hard development work on the road. This is a moment for us to celebrate. We are extremely proud that as a small company we have developed such visionary technology as the nanoFLOWCELL® and are now also able to put it into practice. But this is only the beginning of our journey of discovery,"

"At the car's world premiere in Geneva, a large number of investors and automobile manufacturers showed tremendous interest in the new QUANT e-Sportlimousine and the nanoFLOWCELL® drivetrain concept, together with its wide range of possible applications. Now that the automobile has been approved for use on public roads in Germany and the rest of Europe we can enter into detailed planning with our partners, adding an exciting new chapter to the future of electro-mobility,"

"The attention received by the nanoFLOWCELL® and the positive response to it has encouraged us to think about investment possibilities in the project, right up to a possible initial public offering. This would enable us to drive forward the wide range of possible applications and potential of the nanoFLOWCELL® on an international scale. Initial planning and discussions are already taking place,"

"Here in Munich in particular, where other prestigious automobile manufacturers are advertising their electric vehicle with the slogan 'ERSTER EINER NEUEN ZEIT' ('FIRST IN A NEW AGE') or 'THE MOST PROGRESSIVE SPORTS CAR', we are delighted as pioneers to be able to present an automobile driven by flow cell technology on public roads, and one which achieves not only fantastic performance values but also zero emissions. With a projected top speed of over 350 km/h, acceleration from 0-100 in 2.8 seconds, a torque of four times 2,900 NM, a length of over 5.25 m and a range of more than 600 km, the four-seater QUANT e-Sportlimousine is not only a highly competitive sports car but also 'SEINER ZEIT VORAUS - UND ZWAR SCHON HEUTE' ('WELL AHEAD OF ITS TIME - IN FACT TODAY'),"

Prof. Jens-Peter Ellermann, chairman of the board of directors at nanoFLOWCELL AG stated:

"Approval of the QUANT e-Sportlimousine with the nanoFLOWCELL® drivetrain concept is a vital step forward for nanoFLOWCELL AG. What began as the vision of Nunzio La Vecchia has now become reality. The fact that only four months after the car's world premiere in Geneva we have received approval for the use of the QUANT e-Sportlimousine with nanoFLOWCELL® drivetrain concept on the road in Germany and the rest of Europe indicates the dynamism with which our entire team is working on this project. We are very much looking forward to the next stages of this exciting and promising journey. We've got major plans, and not just within the automobile industry. The potential of the nanoFLOWCELL® is much greater, especially in terms of domestic energy supplies as well as in maritime, rail and aviation technology. The nanoFLOWCELL® offers a wide range of applications as a sustainable, low cost and environmentally-friendly source of energy."