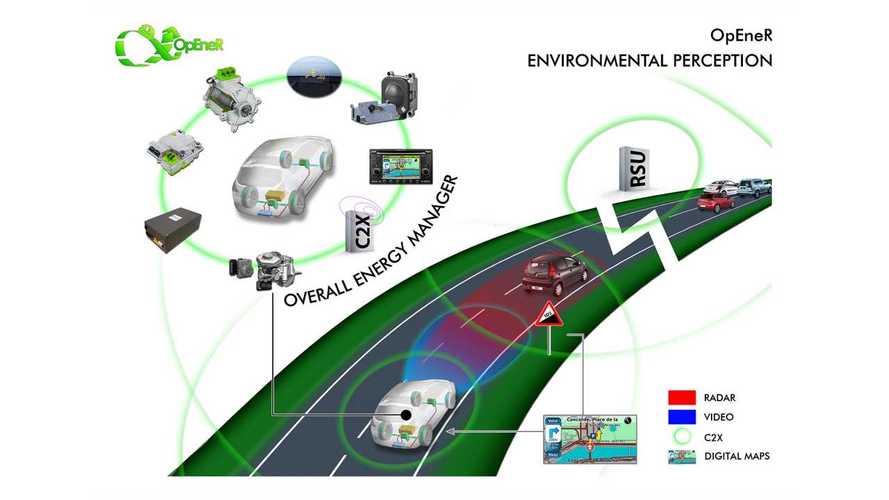 OpEneR, which stands for Optimal Energy Consumption And Recovery Based On A System Network, was a three-year European research project launched on May 1, 2011 and led by Bosch.

According to the Bosch press release, driving strategies and driver assistance systems can significantly improve the efficiency of electric and hybrid vehicles.

"Engineers and researchers have worked to improve the electrical powertrain, the regenerative braking system, the navigation system, and the surround sensors, as well as on functions that connect these elements with each other. The two fully operational electric vehicles they have built have already demonstrated an impressive potential for making driving in real conditions more economical."

So what are the results? Well, for example, under OpEneR different driving strategies were checked - time-optimized or range-maximized.

“eco routing”, which is optimizing the route by the navigation system taking into consideration energy usage, proved that cars can reach the destination using up to 30% less energy in return for a longer travel time of just 14 percent. Also, shortcuts in inner-city traffic helped increase efficiency.

Using operation strategies, numerous test drives were able to reduce energy consumption by 27 to 36 percent (in comparison to a typical sporty driver) depending on the driver's willingness to follow the recommendations. However, the journeys were longer by 8 to 21 percent.

On the technical side, roughly 5% more range could be gained thanks to intelligent torque distribution between the front and rear electric motors (there were two motors in demo cars, one per axle), without sacrificing time.

It has long been widely accepted that a proactive driving style is the most effective way to reduce fuel consumption. The behavior of the ACC adaptive cruise control has therefore been especially adapted to an economical driving style. Additionally, enhanced map data also includes information on inclines, declines, and speed limits, while car-to-infrastructure communication provides information about traffic lights. These data create an electronic horizon that can be used to further optimize both the ACC function and the coasting function. This feature tells drivers when to lift the accelerator pedal as they approach city boundaries or speed limits. The transmission then switches to idle, making the most of the car's momentum.

An intuitive HMI concept and an attractive cockpit based on a freely programmable TFT display also have been designed to make all the relevant information easy to read. In addition, the enhanced map data makes the calculation of the remaining mileage significantly more accurate and transparent to the driver.

A further major task was to find the ideal interaction between the electrical powertrain and the regenerative braking system. For the best possible recuperation, engineers equipped the two Peugeot 3008 e-4WD demo cars with the Bosch iBooster, an electromechanical brake booster, and an ESP® brake control system specifically adapted for electric vehicles. The powertrain concept comprises two electric motors – one per axle – that can both drive as well as recuperate. On that technical basis, the partners have developed innovative recuperation strategies, including a regenerative brake force distribution between front and rear, optimizing recuperation rates as well as vehicle stability.

To support the development process, the team used advanced co-simulation techniques, including realistic vehicle and environment interaction. A seamless approach was employed to enable fast migration of the developed functions and their simulated test cases for further development and validation on the AVL InMotion™ powertrain testbed.

As these features were incorporated into the two prototypes, numerous test drives were performed. To evaluate the efficiency gain, the simulation tools and testbeds developed by AVL, Bosch, and FZI were used, as well as the private test tracks belonging to Bosch and CTAG, and CTAG's intelligent public road corridor. In comparison to a typical sporty driver, the operation strategies finally resulted in a reduced energy consumption of 27 to 36 percent, with an increase in travel time of between 8 to 21 percent – depending on the driver's willingness to follow the recommendations. Approximately 5 percentage points of the energy consumption reduction are due to intelligent torque distribution between the front and rear electric motors, which has no influence on travel time at all.