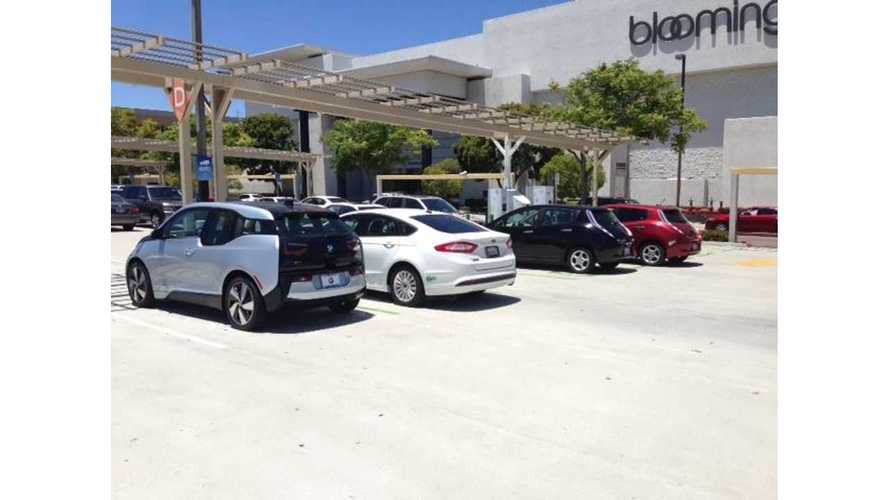 Four new Freedom Stations were (or rather, still are) installed at The Shops at Mission Viejo, Brea Mall, Westminster Mall and The Outlets at Orange.

"Our growing network of state-of-the-art electric vehicle charging stations at our shopping centers shows our commitment to delivering a more sustainable shopping experience that is also convenient for our customers. Adding charging stations to popular destinations such as The Shops at Mission Viejo, Brea Mall, Westminster Mall and The Outlets at Orange illustrates the many opportunities we have as a company to incorporate sustainable practices into our day-to-day operations."

"The NRG eVgo Freedom Station sites at The Shops at Mission Viejo, Brea Mall, Westminster Mall and The Outlets at Orange have enabled NRG eVgo to become the largest fast charge network in Orange County, and we continue to grow our comprehensive charging network for electric car drivers in California. Partnering with Simon on these Freedom Station sites in Orange County also connects San Diego to Los Angeles and Ventura along the NRG eVgo network, making it even easier for Californians to choose an electric car for their next purchase."

Rather funny is that in press release from June, NRG eVgo stated that station will be ready in May:

"The Shops at Mission Viejo's Freedom Station is slated to open at the end of May, and will be located in the parking lot between Forever 21 and P.F. Chang's China Bistro."

The Outlets at Orange's Freedom Station was opened in April at the parking lot near Neiman Marcus Last Call and Burke William's Day Spa.

Two other locations will be ready this month:

"Brea Mall is looking to open its Freedom Station in early June, and will be located in the parking lot near California Pizza Kitchen, on the south side of the newly renovated center."

"The Freedom Station at Westminster Mall is expected to open in mid-June, and will be located in the parking lot near DSW, between Sears and JCPenney, on the northeast side of the mall."