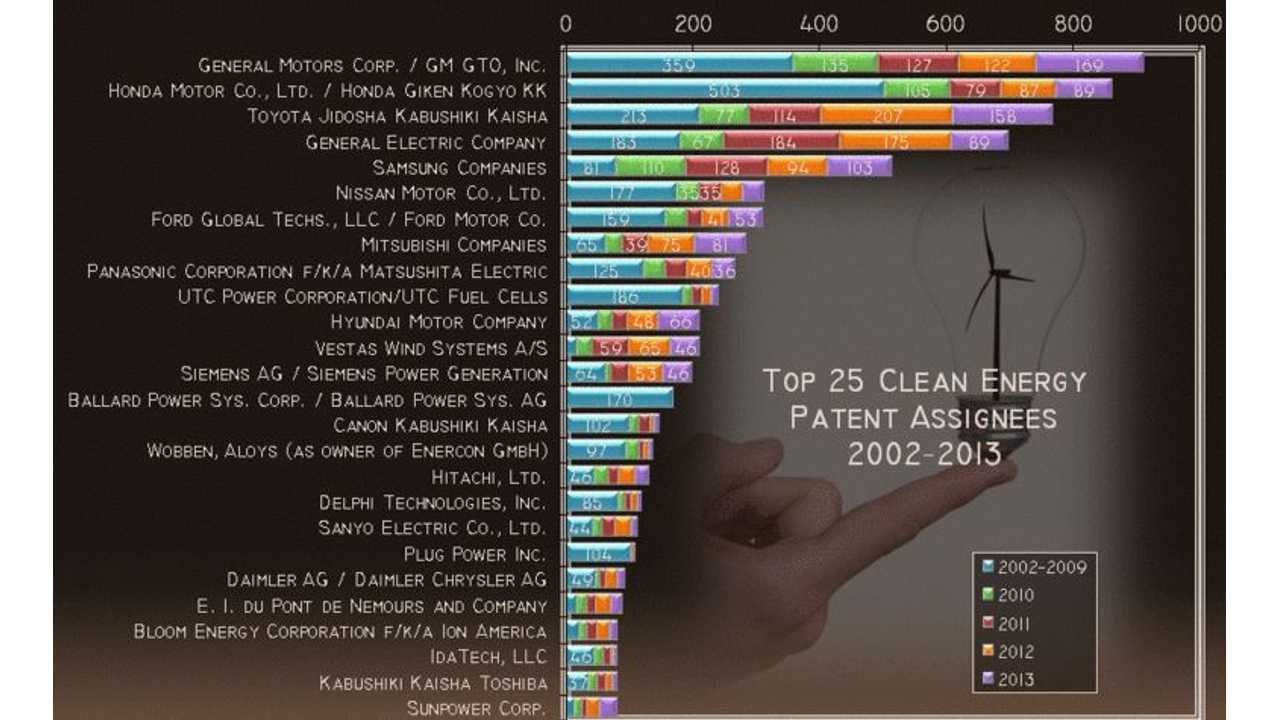 81.8 Miles On Electricity In A Chevy Volt - We're Sure That More Than A Few Patents Contribute To That Level Of Single Charge Range

General Motors, like Honda and Toyota, attempts to patent all of its technological ideas, which is part of the reason why it tops this chart for clean energy patents from 2002 through 2013.

The other part of the reason GM leads in clean energy patents comes from the fact that is offers everything from battery electric vehicles, to plug-in hybrids (EREV), to mild hybrids to fuel-cell vehicles.

General Motors truly has a toe or two in every clean energy automotive segment, so it should come as no surprise that GM  was listed as a Top Innovator and placed #1  in automotive industry patent filings for the 11th consecutive quarter and #1 in clean energy patents granted since 2002.

Unfortunately, there's no direct mention of the Chevy Spark EV or Chevrolet Volt in the press release below, but we do know that the Volt heads is GM's leader in clean energy patents.

DETROIT – Dreaming up ideas that benefit drivers is interesting; commercializing those ideas into real product features is when customers take notice.

An indicator of General Motors’ commitment to creating customer-driven innovation can be found in the results of two leading studies - the Patent Board and Clean Energy Patent Growth Index. Together they show that GM is a leader in overall patent filings and those focused on clean energy technology.

GM finished first in overall industry patent filings for the 11th consecutive quarter, according to the Patent Board.

“Patents are an indicator of the potential for the GM enterprise to innovate,” said Jon Lauckner, GM chief technology officer, vice president of Global R&D and president of GM Ventures. “Thriving companies have a track record of creating and commercializing innovation, and we are striving every day to discover technological breakthroughs that create tangible benefits for our customers around the globe.”

Patents by the numbers

During the past year, GM accumulated 1,643 patents, according to the Patent Board study. Patent volume is necessary, but commercialization for customer benefit is most important.

“GM is the only company to have achieved the No. 1 position 11 consecutive times in the Patent Board’s Automotive and Transportation industry ranking,” said Karl R. Wilhelm, chief executive officer of the Patent Board. “GM’s contribution to innovation in its industry has clearly put it ahead of its competitors.”

The Patent Board is the leading independent provider of best practices research tools and metrics for patent analysis and intellectual property investment. The Patent Board tracks and analyzes innovation and patents across 17 industries on a global basis. The Patent Board technology strength ranking is based on each company’s patent portfolio scale, quality and impact.

Clean energy patents are growing faster than ever in the United States. With more clean energy patents than any other company, GM is committed to developing and implementing technologies that lessen the environmental impact of vehicle emissions.

GM also led all companies in fuel cell patents granted in 2013 as it has since 2002. Fuel cell technology could enable vehicles to be fueled with renewable hydrogen, a sustainable alternative to the gasoline-powered internal combustion engine.

GM has been granted more than two dozen patents related to the all-new eight-speed automatic transmission that will be offered in the Chevrolet Corvette Stingray for 2015, enhancing the performance and efficiency of the 2014 North American Car of the Year. Designed and built by GM, the new transmission delivers world-class shift times that rival the best dual-clutch designs.

The GM-designed 8L90 eight-speed is expected to contribute up to 5-percent greater efficiency, when compared to the previous six-speed automatic.

Additional control, in the palm of your hand

In OnStar’s 18-year history, it has received more than 500 patents for vehicle navigation, safety and telematics.

A handful of these patents are incorporated into the OnStar RemoteLink™ mobile app. This app allows users to start, stop, lock, unlock and activate the horn and lights on their vehicle from remote distances. These remote features are now free for five years on properly equipped 2014 and newer GM vehicles.

Users of the app also can access vehicle diagnostic information, such as tire pressure, fuel level and oil life. Drivers also can use RemoteLink to send a destination directly to their vehicle’s navigation system through their smartphone. Once the driver starts the vehicle, directions to the planned destination will begin.