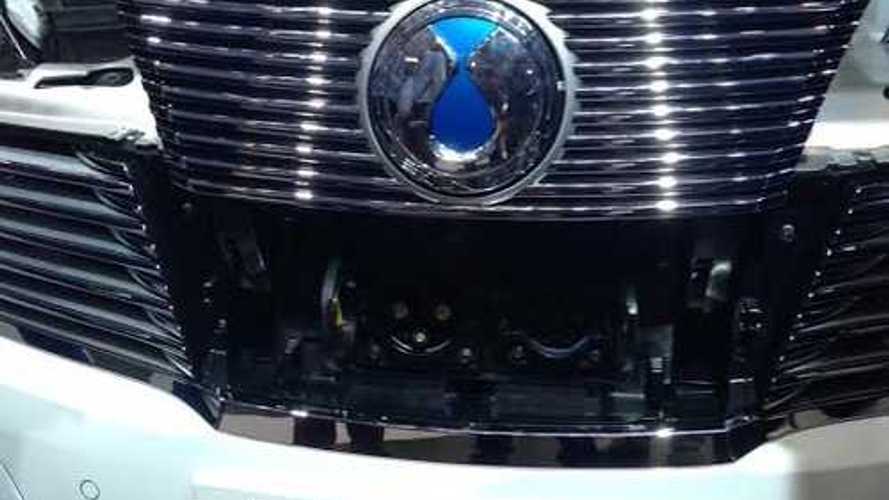 How Does The Press Images Stack Up In Person?

To suggest this would be the electric that most people outside of China are also looking for would be an understatement.  If this was a new Chevy, Nissan, Ford or even Tesla offering...people would be lining up to get one.

But how is it really? Does it live up to the press images?  What is it like in the flesh?

Fortunately, we just happen to be in Beijing for Auto China 2014 and the DENZA is available to be poked, prodded and inspected up close.  Unfortunately, journalist test drives were not made available.

Visually the car does appear much larger than the specs would indicate both inside and out over the more familiar  plug-in nameplates - Nissan LEAF and Chevrolet Volt.  A quick check of the specs does show that it's a good half to three-quarters of a foot longer, and a few inches wider.  But it's the raw height and wheelbase that make all the difference.

As a purpose-built EV, the DENZA's huge 47.5 kWh battery has to be squeezed in somewhere, and like the LEAF and Tesla Model S the pack is hidden in the floor; a fact that makes the DENZA ride high, a full 8 inches higher than that of the Volt.  Couple that with the extra 8 inches on the wheelbase in a much more squared-off design and the interior is a virtual cave in comparison.

*Note:  We should say that the 300km/186 mile range estimate is not EPA based, in the US (or in the real world driving scenarios), one could expect more like 140-150 miles of travelling distance - still not too shabby.

As advertised, the DENZA is a five-seater, and it looks to be quite serviceable; although we would still not suggest making '3 in the back' a regular occurrence.  For a couple of six footers though, the backseat need not be a place to be afraid of - but rather one of the best seats in the house.

As for the interior's fit and finish - it's not perfect; this is not the Cadillac ELR at the end of day, but it would be on par with what you would expect from a reasonably priced US mid-size sedan from Ford or Toyota.

If we were being nit-picky, not all the interior colors and trim pieces line-up just as well as you might expect ... and we've seen better floor mats being discounted at the local Wal-Mart.

We do however, like the extra finishes we aren't accustomed to; the 18" 10-spoke wheels, the fantastical front charging port...and the trunk.

Boy, does Daimler/BYD love the boot on this thing.  You can go anywhere without hearing about the trunk.  It's like they know that almost all the EV makers out there have screwed up the trunk in some way.

The DENZA's trunk is massive, more than 50% larger than the Volt, twice that of the Focus Electric; even 25% larger than the LEAF.  Plus it has a full size spare under the floor, and a place for your charging cable  (just in case you want to do one of those incredibly slow 32 hour (1.5 kW) trickle charges from a standard plug).

Here are some of the technical specs and charge times for the DENZA before we move on with the pictorial review:

Deeper In The Cave We Find This - A Full-Size Spare, Charging Cables And A Small Chinese Family Of Squatters

Oh BTW, Did We Mention The Trunk, If Not Here Is Another Sign About It

The DENZA Booth Is Quite Popular

I Swear, If You Mention The Trunk...Well Ok, YOU Can Talk To Me About The Trunk For A Little While

Yes, Clearly We Are In China With These Charging Protocols

Some Comfort For Those In The Back

Classing Up The Joint With A Chromed Kick-Plate...The Hell Is Up With Those Floor Mats?