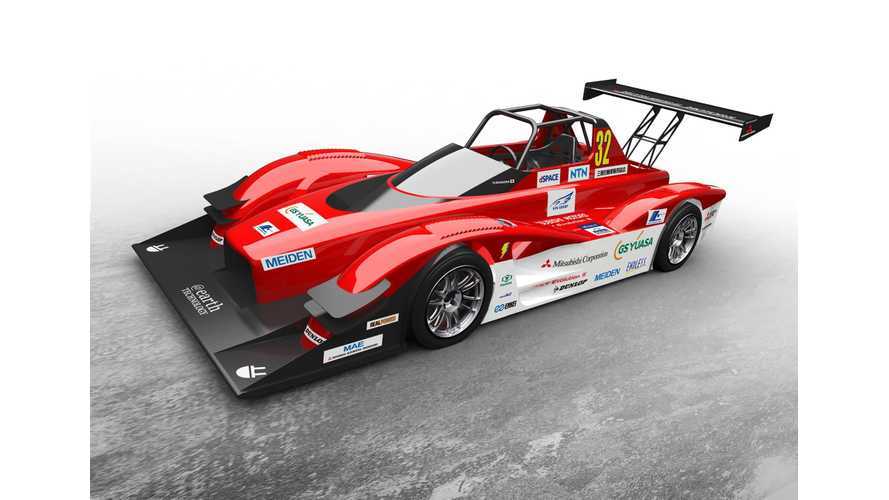 Mitsubishi Motors, after confirming two entries in the 2014 Pikes Peak International Hill Climb, now presents the racer to be used by Greg Tracy and Hiroshi Masuoka.

Meet the MiEV Evolution III, the third generation of the fastest electric Mitsubishi.

With two second place finishes in 2012 and 2013, the Japanese company hope that its highly upgraded MiEV Evolution III will take victory in the new Electric Modified Division.

These Mitsubishis still sport a 4WD drivetrain with four motors, but power is up from 400 kW to 450 kW, among many other improvements:

"The MiEV Evolution III racecar is an improved and evolved version of last year's MiEV Evolution II. Main components including high-capacity battery, high-output electric motor and electric powered 4WD consisting of four electric motors have been retained with improvements made to give better motive and cornering performance. To reduce weight in the pipe-frame chassis the design has rationalized and some structural materials have been replaced. Total motor output of four motors has been boosted from 400 kW to 450 kW and to ensure all the extra power is put down on the road surface the tires have been uprated in size from 260/650-18 to 330/680-18. Accordingly downforce has been increased with a new carbon cowl design and with wind-tunnel optimization of the spoiler and other detail shapes. Evolutionary development of the S-AWC integrated vehicle dynamics control system has improved traction control performance and has reduced wheel slip by controlling vehicle attitude more precisely when near the limit of adhesion. These improvements allow the driver to extract the full potential of the racecar's awesome handling with confidence and reassurance."

Well, it seems that this year Nobuhiro “Monster” Tajima's E-RUNNER will again have serious competitors.

Here are the specifications:

And a press release about the team, the race and some words from Hiroshi Masuoka:

The team technical director and chief mechanics are mainly all engineers in MMC's Development Engineering Office. Responsible for the maintenance of the racecars during the hill climb event, they will also be gathering data and knowhow which will be fed back into the advance development of MMC EV technologies, its S-AWC (Super All-Wheel Control) integrated vehicle dynamics control system and into the company's "e-EVOLUTION" - a fusion of electric motor drive and the S-AWC system.

Held annually in Colorado, United States, the Pikes Peak International Hill Climb is an automobile and motorcycle hill climb. First run in 1916, the hill climb celebrates its 92nd running this year.  The race starts at an elevation of 2,862 m and takes competitors through 156 corners on a 20 km course to the finish on the 4,301 meter summit of Pikes Peak. With an elevation difference of 1,439 meters, atmospheric pressure, temperature, weather and other conditions vary significantly between the start and finish. Race week in the 2014 event starts with Registration and Tech Inspection on Monday, June 23, followed by the PPHIC Sanctioned Practice day on June 24, then by three days of practice and qualifying from June 25 to June 27. For practice and qualifying, the course is split into three sections - Bottom, Middle and Upper - with each division being allotted a different section over the three days. Practice runs on the Bottom section also serve as qualifying and the times recorded on that section are used to decide the starting order in each division on June 29 of Race Day.

This is the third Pikes Peak for MMC. The i-MiEV Evolution we entered in 2012 used the motors, the battery and many other components from the production i-MiEV model. It was our first Pikes Peak but our second place finish in the Electric Division proved that MMC's electric vehicle technologies were more than capable of withstanding the rigors of the tough world of motor racing. Last year, our second Pikes Peak, we entered the MiEV Evolution II, fitted with many advance development parts, with the objective of feeding back the data and knowhow gained into future production models. MiEV Evolution II also used the S-AWC integrated vehicle dynamics control system, one of MMC's foremost technologies, to realize a major improvement in performance. Unfortunately we just missed victory, finishing second in our division, when a sudden downpour just before our start time prevented us from using slick tires. This year sees our third attempt at this great race and we will be going for victory in the Electric Modified Division. MiEV Evolution III is an improved version of last year's machine and brings significantly better cornering performance after improvements to the motors, aerodynamics and tires. That the driver can feel confident about extracting every ounce of the increased performance is thanks to evolutionary development of the S-AWC system. This has resulted in a quantum leap in vehicle stability on winding roads, and I am confident that MiEV Evolution III will demonstrate the full extent of its potential over a course such as Pikes Peak with its 156 corners. Together with Greg Tracy, my team mate from last year, we will be going flat out for victory in the Electric Modified Division. We look forward to your support.