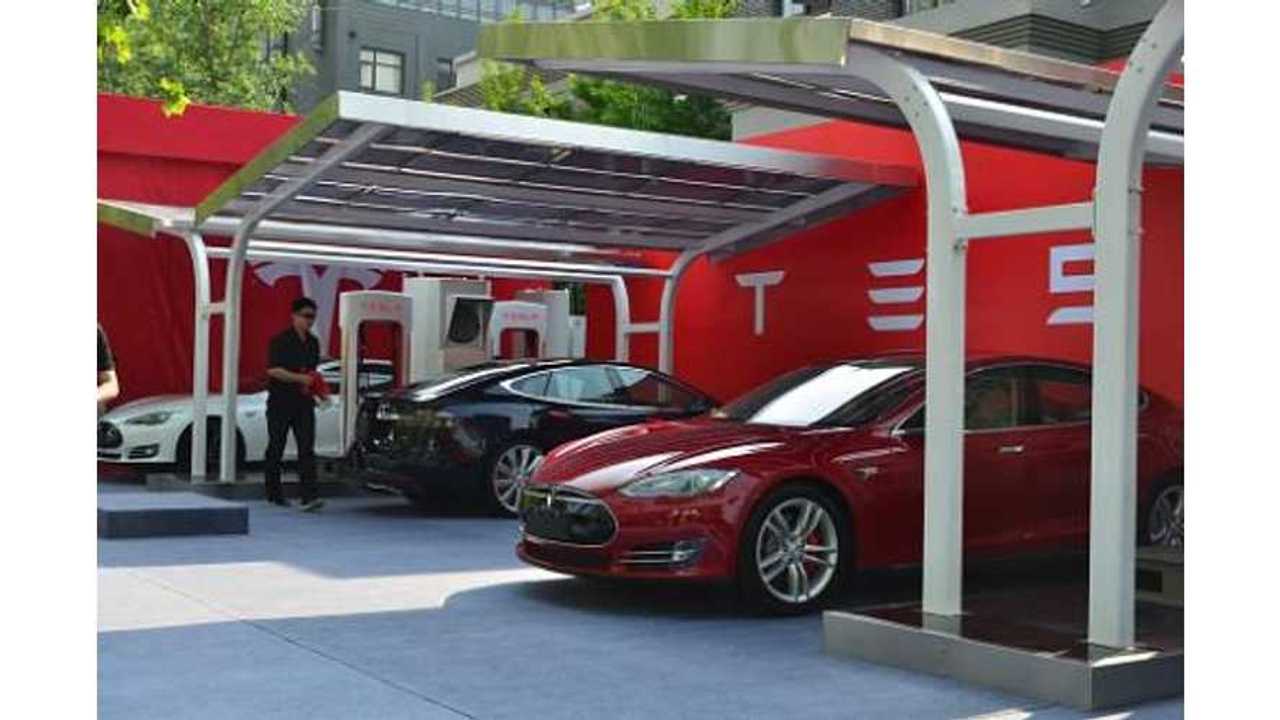 InsideEVs Is Always On The Scene

At Auto China 2014, Tesla Motors took the opportunity to showcase its first solar Supercharger in Beijing

"At the recent delivery ceremony of Tesla’s first batch of Chinese orders in Beijing, two PV charging systems caught the eyes of the guests. The system was requested by Tesla Motors, and designed and manufactured by Hanergy Solar Group. Hanergy thin-film flexible PV system was Tesla’s first choice for the first PV Supercharger station in China."

“In the future, Tesla will work with partners to build supercharger network. The first charging station in Beijing was built in cooperation with Hanergy Solar Group. Tesla will continue to invest in the construction of superchargers in China, aiming to quickly expand the network.”

As for those solar carports/Supercharger, Hanergy Solar Group states:

"Hanergy Solar Group will deliver two solar carports, each in Beijing and Jiading, Shanghai. The Beijing carport, a mobile carport designed to be assembled and transported, adopts Hanergy’s GSE flexible thin-film solar modules. The Shanghai carport will be a fixed structure, and adopts Hanergy’s MiaSole CIGS high-efficiency modules. The first phase of both carports has been completed."

But wait, there's more in the work.  Musk says that Tesla is already in the process of building 7 Supercharger networks in China, all of which will be solar-powered units with energy storage systems..  They'll be open 24 hours a day, 7 days a week.  The first of those networks will be in Beijing and Shanghai.

Back to Hanergy's solar carports:

"The PV charging system by Hanergy Solar Group protects vehicles like ordinary carports while converting sunlight into electricity utilizing its designated rooftop. At the same time, the system charges the electric vehicle through its energy storage system. The system uses the CIGS thin-film PV technology, the most advanced in the world. With conversion rates peaking at 20.5%, this technology offers light weight, flexibility, excellent low-light performance and advanced packaging. More importantly, no fixed column is required, which significantly reduces the cost. The carport is mobile, beautiful, modern in appearance, and a perfectly integrated to city surroundings, providing convenient and fast charging services to electric car owners."

“We are pleased to be the one to provide Tesla the first batch of solar powered Supercharging stations in China. As a technology-driven company, Hanergy has been actively exploring ways to utilize its thin-film photovoltaic technology to provide solutions through technological innovation and cross industrial integration. We have been working with multiple domestic and foreign automobile manufacturers to integrate solar, and is also researching on energy storage, photovoltaic car roof and other solar-automobile applications.”

China's dependence upon coal for electricity is what convinced Tesla Motors that all Superchargers in China will rely on the power of the Sun and be supplemented by energy storage systems.