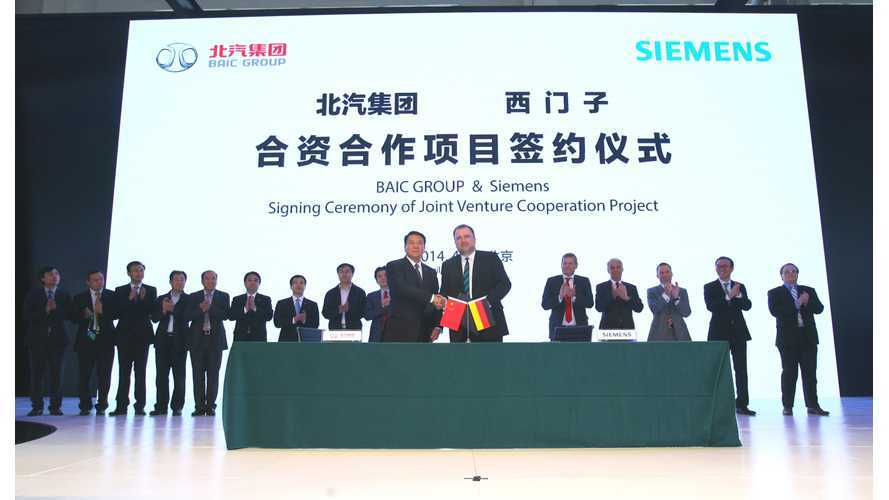 Way Back IN The Day BAIC Unveiled This Saab Clone And Yes It Was Electric - Unfortunately, It Never Made It To Production

There will be a small production of prototypes later in 2014, followed by a new production plant in 2015 in Beijing, which will build over 100,000 units every year.

BAIC currently has partnerships with Hyundai Motor Co. & Daimler AG, but this is Siemens first joint venture for the production of electric motors.

The 2 companies signed the agreement at the 2014 Beijing International Automotive Exhibition last weekend with a deal to provide these electric drivetrains, which are claimed to have higher power density and improved efficiency, as well as being safer than?!?!  We don't know which motors these are being compared to since BAIC and Siemens fail to mention the comparative motor.

Moving on, these two companies joined to supposedly do their part in helping the Chinese government's initiative, which calls for an influx of new "green" technologies for vehicles.

Siemens Was On Hand At The Beijing Auto Show

Member of the Managing Board of Siemens AG and CEO of Siemens Industry Sector, Siegfried Russwurm, stated:

"This cooperation will further strengthen our leading position in high efficient drive technologies."

"BAIC is a major player in one of the fastest growing markets for e-Mobility. Siemens is a global innovative pioneer for electric power train solutions. We will pave the way for a higher share of e-Mobility on tomorrow's roads."

"This in-depth cooperation between BAIC and Siemens regarding EV motors is a big move for BAIC. We will develop NEVs via integrated global resources and continuous open and integrated innovation. This cooperation will bring the technology of BAIC's NEV products to the next level. With world-leading motors as the core component, BAIC's NEV cars, with the strength this partnership adds, will be distinguished even further during this important start-up phase for NEVs in China."

BAIC will use Siemens electric components for S, C, & L Model series vehicles. These models will feature electric motors with output ranging from 45 to 200 kW.