The Future Of CHAdeMO In Multistandard European Union 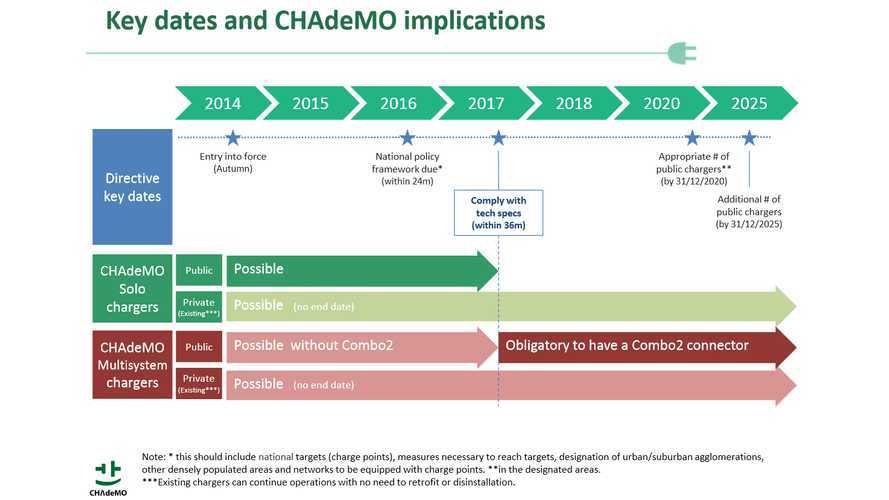 From Left to Right: Mennekes, CHAdeMO and Combo (European)

Now, in one of the latest presentations, the Japanese organization posted an abstract of new situation on one graph.

If nothing changes, CHAdeMO will not be eliminated, but new public fast chargers will in a few years need to have Combo 2 plug as an obligatory feature. CHAdeMO and other systems will be optional.

Private fast chargers like for companies with fleets of cars will still be able to have solo CHAdeMO chargers.

"In a clear recognition of this effort, and of CHAdeMO Europe’s repeated calls to embrace multiple types of connectors in a single charger, the European Union has adopted the final draft of a directive for the deployment of an alternative fuel infrastructure that endorses CHAdeMO multi‐standard chargers. With this, the EU has aligned its legislation with the market reality, as the mainstream products in the European market today host multiple types of connectors, allowing all drivers of EVs equipped with either CHAdeMO or Combo2 connectors to benefit from a single charger."

Because CHAdeMO has outnumbered cars with other standards, currently most charging station operators will probably be willing to set up multistandard chargers, which means that in the foresable future, CHAdeMO will remain strong in Europe.

And this graph carries additional information, including that maybe Tesla Superchargers - treated as private, could exist too.

According to CHAdeMO Association, the cost of multistandard chargers will be 5-10% higher than a single standard unit.

EU Directive on the deployment of alternative fuels infrastructure