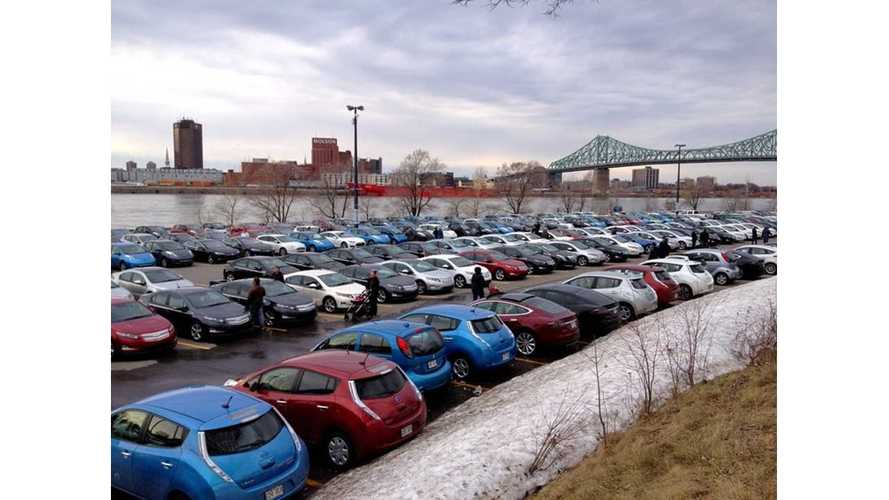 Although it won't be officially recognized for a couple weeks, a sea of 431 plug-in vehicles in Montreal, Quebec have taken down the record for most EVs in one gathering.

As reported by L'Association des Véhicules Electriques du Québec (AVEQ), the event happened on Friday, April 18th.  The website also reports that no "scooters" were present, as the previous record setters in Switzerland had included.

Also in attendance, a VIA V-Trux PHEV truck, which pulled an electric boat (which was not counted in the 431 vehicle total), and a Bolloré Bluecar - along with all the usually suspects (Chevrolet Volts, Nissan LEAFs, Tesla Model S sedans, Misubishi i-MiEVs, etc.).

Says AVEQ on the event:

"People present at the event went away with unforgettable memories. It was beautiful to see this sea of ​​electric cars that filled the parking lot of La Ronde, even moving!  It often feels alone, only meeting other EVs from time to time on the road, but this time it was undeniable.

The only noise was noticeable, besides tire rolling, was the pedestrian alerts of the Nissan LEAFs. With one Leaf in a street, it's a sweet sound.  With one hundred Leafs that follow, it gives the impression that the dwarves of Snow White were whistling while working!"

Event organizers plan on holding another event to best the record again next year.  In total more than 2,800 electric vehicles are registered in Quebec today.

Also In Attendance - A Bolloré Bluecar