Majority Of Passenger EVs in Europe Have CHAdeMO Inlet 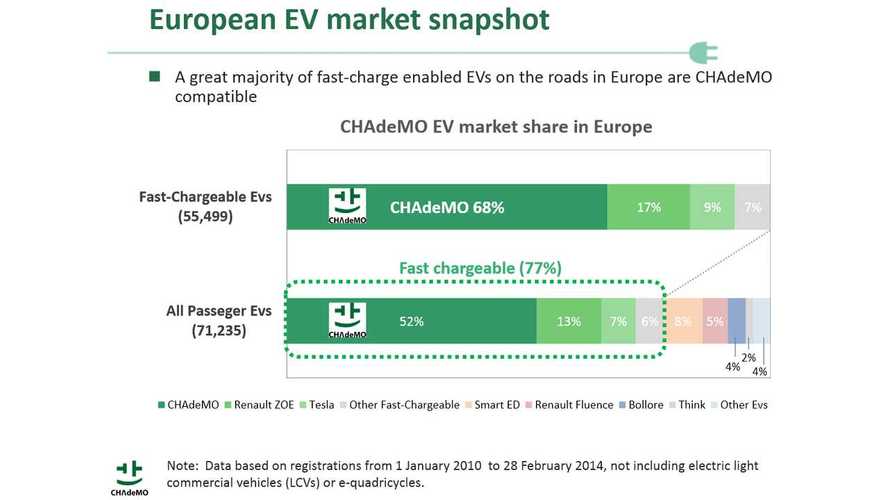 According to CHAdeMO Association, data from January 1, 2010 through February 28, 2014 in Europe shows that the CHAdeMO fast charging standard still is dominant among passenger EVs (pure electric ones). By the way, we now know how many EVs were sold in Europe through March 2014 - over 70,000.

Light delivery vehicles (like Renault Kangoo Z.E.) to date weren't equipped with fast charging capability, but the new Nissan e-NV200 and the new version of the Peugeot Partner/Citroen Berlingo are, and of course have CHAdeMO inlets.

On the graph we see that 52% of all passenger EVs have the CHAdeMO standard implemented. 78% have fast-charge capability however, this is from four solutions (CHAdeMO, 3-phase AC up to 43 kW in Renault ZOE, Tesla Superchargers and Combo) that aren't compatible with each other.

We notethat for now CHAdeMO has almost 10-times more cars on the roads than Combo in Europe.

Among fast-chargeable EVs, CHAdeMO has an even 68% market share.

In Japan, CHAdeMO's domination is already set and nobody will challenge it as all manufacturers are willing to join this standard and get access to over 2,000 fast chargers:

"Such a push from all fronts accelerating charging infrastructure deployment nationwide has brought heightened attention to EVs and PHEVs. Not only that, overseas automakers such as Tesla Motors, BMW, Kia and Volkswagen have announced that they will launch CHAdeMO‐compatible EVs in the Japanese market."

How does the situation look in the U.S.? Probably similar to Europe, but simpler - without the 3-phase AC charging variant. Tesla Superchargers have a higher share, displacing Combo's much smaller share.