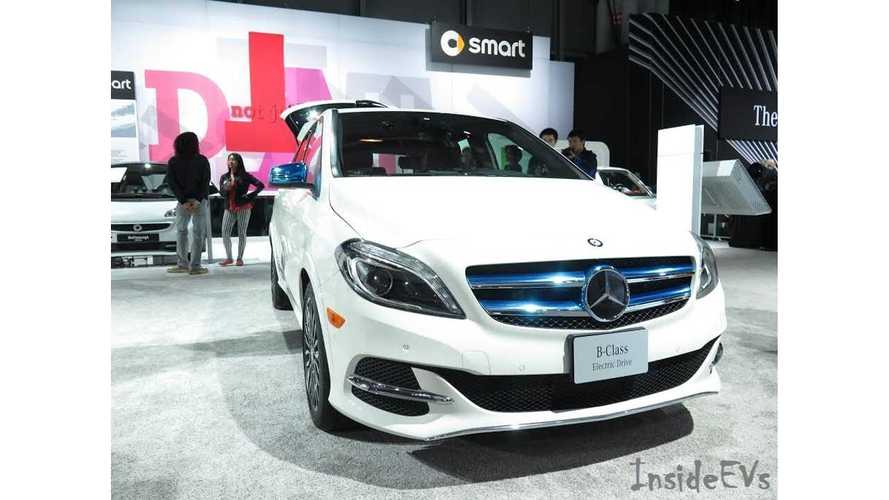 Unlike the past few New York Auto Shows, this year's exhibit doesn’t have a lot going on in the electric vehicle segment.

After spending some time getting in and out of the back seat of a BMW i8, I wandered over to the Mercedes area, which was right next to BMW’s display.  While there, I spent some time with Michael Schweizer, Daimler’s E-Mobility program manager for Mercedes-Benz USA.

The B-Class Electric Drive will make its US debut this summer and will initially be available only in ten states (California, Connecticut, Massachusetts, Maryland, Maine, New Jersey, New York, Oregon, Rhode Island, and Vermont). However, by early 2015, availability will be expanded to include all fifty states.

Power is derived from a Tesla Motors developed powertrain consisting of a 100-kilowatt (174-horsepower; 250 lb-ft torque) electric motor and battery pack. That’s good enough to propel the electric Benz from zero to sixty miles per hour in under eight seconds. The B-Class Electric Drive can charge at up to 10kWs on a 240V source, but will not have DC Quick charging available, at least initially. This is a relatively big mistake in my opinion. Hopefully, Daimler realizes that soon and adds DCQC availability on future models.

Of course, all of that has been already announced, but I did manage to uncover some good news for those interested in the B-Class Electric Drive. From the time it was first announced, Mercedes has been maintaining the car will have a 28kWh battery pack, and that would be the total pack size. Considering the B-Class Electric Drive is about 3,900lbs, that left many to assume it would be another 80-mile electric car.

If the total pack size was 28kWh, the usable amount of energy would likely be about 25kWh and given its weight, the range wouldn’t be any more than a LEAF or BMW i3.

Now, for the good news. I was able to confirm new details previously unreported:

1) The amount of usable energy is 28kWh; that is not the total pack size.

2) The 28kWh represents what is available in “Standard Charge Mode,” which is what the car defaults to.

3) Like the Tesla Model S, you can select “Range Mode” before you begin charging and in doing so you’ll have more of the battery pack available, which will increase your range by approximately 15%

This means that by using Range Mode, the driver will likely have 33kWh at their disposal. Obviously, this isn’t going to encroach on Tesla-range territory, but it will give the B-Class Electric Drive the ability to claim the longest all-electric range of any electric vehicle (aside from Tesla) available nationwide.

I expect 100 miles per charge should be easily attained using range mode.