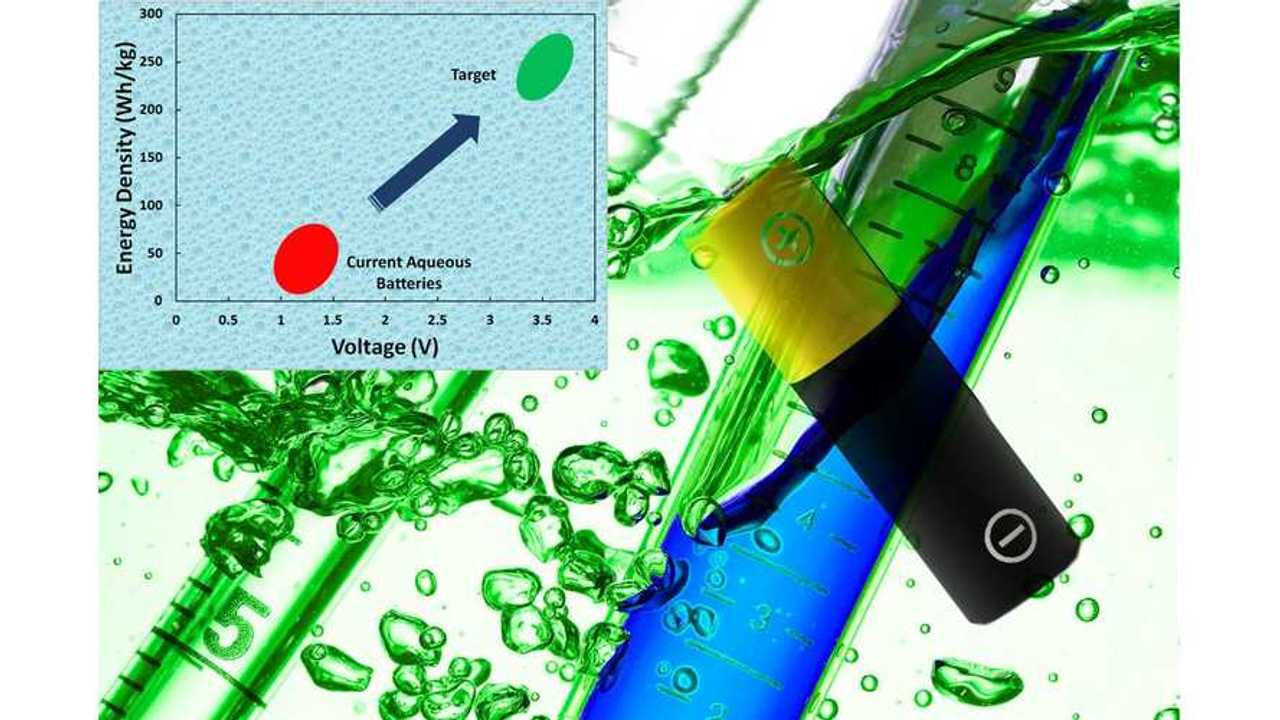 NEI Corporation announced that initiated development of water-based lithium-ion batteries, which - according to website describing the target for this project - will have 250 Wh/kg and 750 Wh/l.

This is still below the top rated 18650 lithium-ion cells produced by Panasonic, but NEI Corporation is aiming for those numbers at the pack level, which means that the cell itself probably would need to be over 300 Wh/kg.

The key difference is the use of water-based electrolyte, which to date wasn't a good idea because some drawbacks:

"While the concept of a lithium-ion cell using a water-based electrolyte has been known and studied, a major limitation is the narrow electrochemical stability window for water, which restricts the cell voltage. For example, the electrochemical stability window for water is within the range of 0 to 1.25V; electrolysis of water occurs outside this voltage range. In contrast, organic solvent-based electrolytes are stable up to at least 4V. The lower the cell voltage is, the lower the energy density is, and consequently, water-based lithium-ion batteries have had low energy densities."

But NEI Corporation stated that scientists and engineers already have developed new material concepts that can overcome the voltage stability issue.

"The innovations pertain to the composition and morphology of the materials used in the lithium-ion cell."

The other benefits from use of aqueous-based lithium-ion battery are safer than those with organic solvents and, according to NEI Corporation, the potential to significantly reduce the cost per kWh.

How'd we discover what NEI is up to?  On May 1, the Environmental Protection Agency’s Small Business Innovation Research (SBIR) Program with funding of almost $100,000 was launched and NEI Corporation was found on the EPA's listing.  NEI welcomes the opportunity to partner with other companies in the industry on this project.

Here is the full description of the grant from the EPA:

Description: NEI Corporation proposes to develop a new and sustainable aqueous electrolyte-based lithium-ion (Li-ion) battery system that is capable of delivering high energy density, comparable to state-of-the-art Li-ion batteries. Almost all commercial Li-ion batteries use an organic electrolyte, which is flammable and has been a concern particularly in large format Li-ion batteries. In addition, there are toxicity and other environmental concerns associated with the non-aqueous electrolyte solvents. The principal feature of the proposed effort is the use of a modified high-capacity cathode in conjunction with a functionalized anode that is capable of reaching much higher cell voltages than aqueous systems reported to date. The wider electrochemical potential, combined with the use of a high capacity cathode, will result in an increase in the energy density. Accordingly, the proposed aqueous electrolyte system eliminates the toxicity and flammability associated with organic electrolytes, thereby leading to a safe and environmentally benign system. Also, the proposed approach will eliminate the use of solvents that is so common during electrode fabrication.

The target gravimetric and volumetric energy densities for the proposed aqueous electrolyte-based Li­ion system at the pack level are 250Wh/kg and 750 Wh/1, respectively. The Phase 1 effort will entail synthesis and characterization of the modified cathode and anode, along with structural and electrochemical characterization of the cell. In Phase 2, the structure and composition of the electrode materials will be further optimized, and the ability to fabricate the materials in large volume will be demonstrated. In addition, by working in partnership with battery manufacturers, the newly developed cathode material will be integrated into large format Li-ion batteries. Prototype cell packs will be fabricated and tested by the end of the Phase 2 program.