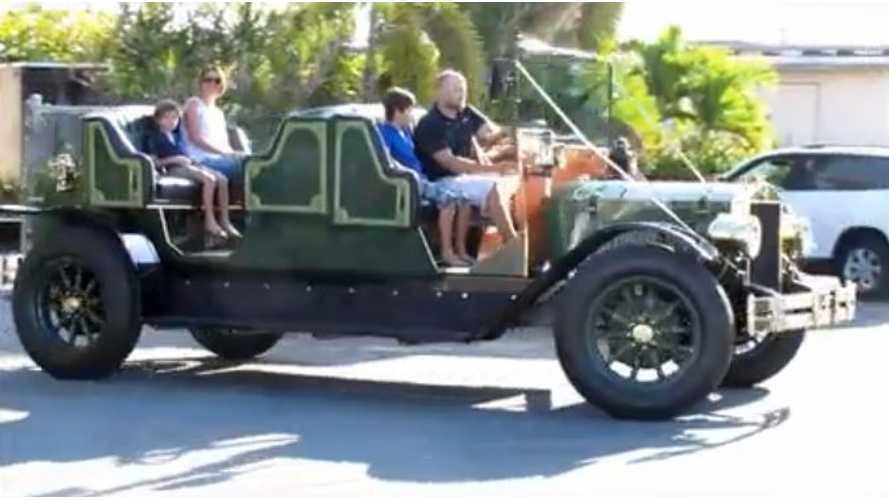 The horseless e-Carriages are coming to New York City.

"Electric drive technology from the small community of Errington on Vancouver Island is powering the new Horseless eCarriage designed to replace the horse and carriage trade in New York City."

"Crafted to look as though it was built in the early 1900s, the nine-person vehicle was a standout at this year’s New York International Auto Show."

The whole idea of the e-Carriage is to do away with NYC's horse-drawn carriages.

"Technology and design have been combined to serve a bigger purpose. The NYCLASS animal activist organization spent close to $500,000, raised from 4,000 donors, to commission the vehicle in its bid to rid the city of horse-drawn carriages. NYCLASS believes the horse and carriage business is cruel to the animals."

According to the Times Colonist.

Well, if NYC is going to get e-Carriages, then the EVs have to be tested, right?  The video above shows the first public tests of the e-Carriage, which can operate for up to 10 hours on a single charge and even features heated seats.

Per the Times Colonist:

"The drive system for the eCarriage was pre-wired, pre-tested, and shipped to Florida in September.   It included an electric motor, controls and monitoring systems needed to meet U.S. federal codes, making the job a little more complex than most."

Once the drive system arrived, body builder The Creative Workshop drop it into the historic-looking carriage and drove off.

There's significant debate in NYC over horse-drawn carriages versus e-Carriages.  We have no interest in discussing the aspects of the debate.  Instead, let's just focus on the e-Carriage, which may somedaye become common in NYC.