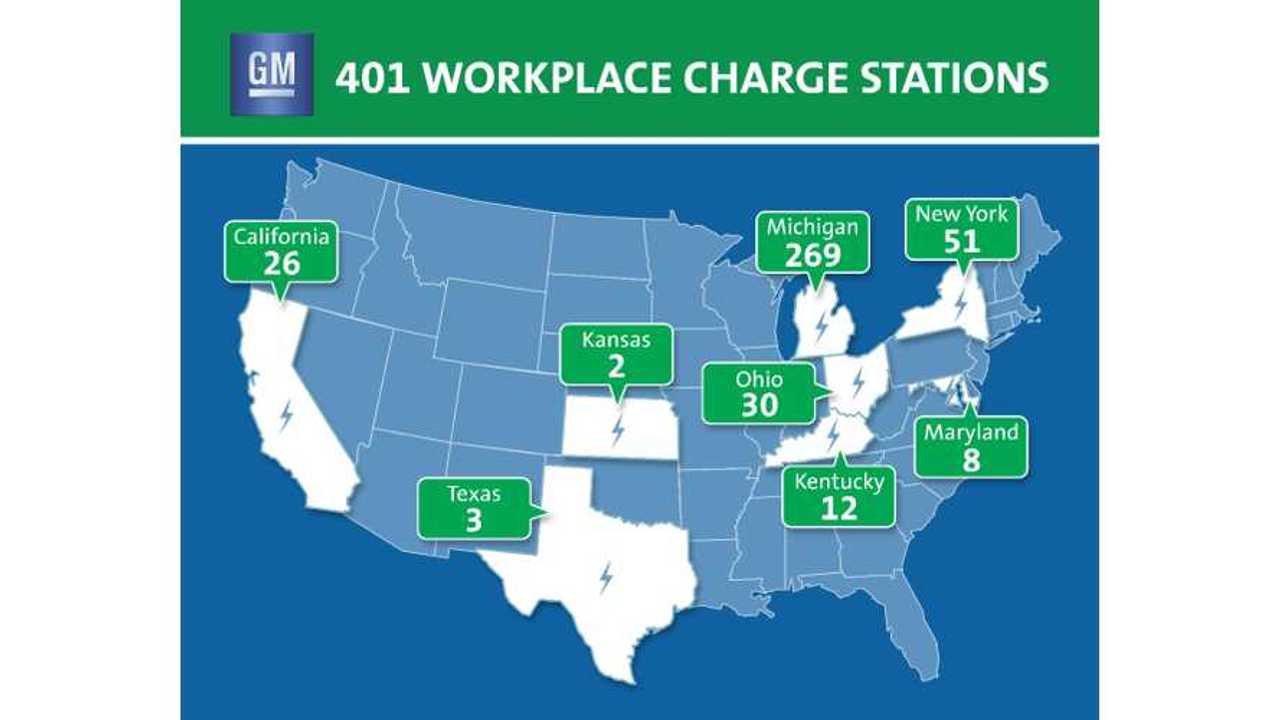 According to General Motors, the automaker's installed count of workplace chargers is now at 401:

"Based on growing employee demand, General Motors today announced that it has installed 401 electric vehicle charging stations at its U.S. production and business facilities. More than 20 percent of the stations use electricity generated from solar canopies to help charge employee vehicles."

Most of the workplace chargers are in Michigan, where General Motors conducts the majority of its business:

"The majority of the stations are located at GM’s large engineering and corporate facilities in Michigan, where employee EV ownership is growing steadily. All charge stations are available free of charge to GM employees and visitors."

“GM’s commitment to installing a workplace charging infrastructure is among the most expansive of any corporation in the U.S.  Workplace charging is one of the most important things a company can do to raise plug-in electric vehicle awareness and energize employees."

“Once employees see how easy it is to plug in at home and work, and they realize the fuel savings, plug-in electric vehicles like the Chevy Volt begin to sell themselves.”

"Workplace charging is now part of GM’s corporate sustainability plan and our employees want to be part of this positive change.  The key for any company is to take the first step and make it simple for employees to engage - in our case we started with outlets and free charging.”

According to General Motors, the 401 workplace charger pale in comparison to the number of chargers installed at Cadillac and Chevrolet dealers in the US.  That dealership charging station figure is ~5,900.  17 of those dealerships have solar canopies installed.

GM’s charging count follows the U.S. Department of Energy’s announcement that 75 businesses have committed to participate in its Workplace Charging Challenge to install charging stations for their employees.

The Workplace Charging Challenge, of which GM is a founding member, seeks to persuade America’s employers to commit to provide electric vehicle charging access to employees through partnership, advocacy and promotion.