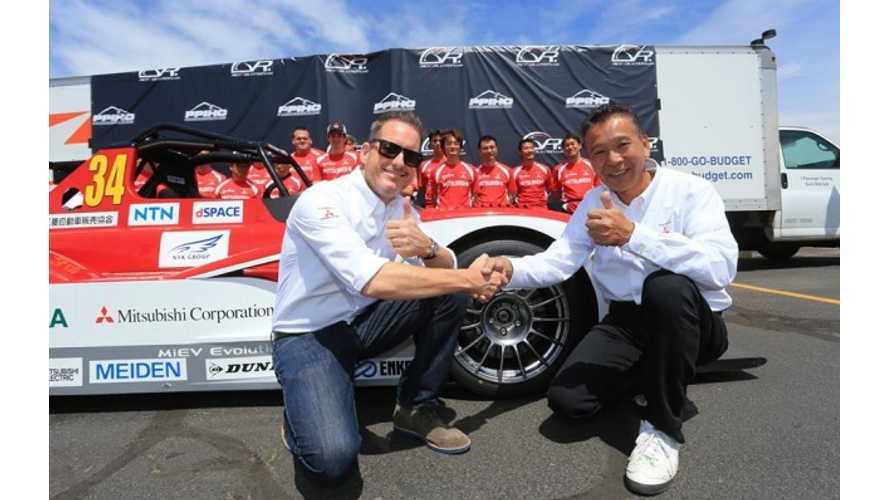 Nobuhiro “Monster” Tajima’s E-RUNNER this year again will not be the only heavy weight contender in the EV division in Pikes Peak International Hill Climb as Mitsubishi has confirmed two entries.

Like in 2013, Greg Tracy and Hiroshi Masuoka will race to the clouds, hopefully without a rainy surprise.

"The powerful Mitsubishi Motors team will again field two factory teams on America’s Mountain on June 29, driven by two of the most accomplished drivers in the history of the race.

Greg Tracy, a six-time Pikes Peak motorcycle champion, will pilot one of the Mitsubishi Motors entries in the chase to the 14,115-foot summit of America’s Mountain.

Tracy, in his last ride on a bike, a Ducati, broke the ten-minute mark with a clocking of 9:58.262. Last year, Tracy surprised race experts and turned a lot of heads around by finishing third in the Electric Division, his first year with Mitsubishi Motors, with a nifty 10:23.649 and an average speed of 74.77 MPH.

His Mitsubishi Motors debut came in 2012 when he finished second behind winner Fumijo Nutahara, but his performance was a look into the future for the talented Masuoka, who was the 2002 and 2003 Dakar Rally Champion for Mitsubishi Motors. Masuoka is one of only four drivers ever to garner back-to-back Dakar titles."

This mean that the three fastest drivers in 2013 will join the grid againthis year.

For anyone who would like to go to this year's event in Colorado Springs on June 29, we spotted some info on fees:

Race Day General Admission Week of Purchase: $50 online (Tickets are available for purchase (in person) during race week at the locations listed on the race week schedule

Camping Information and Tickets: Camping Permit: $100 per vehicle (Each person in the vehicle must also have a valid race ticket)(sold online only). A limited number of camping permits are available for sale on a first-come, first-served basis.

The popular Fan Fest, sponsored by Budweiser, will take place on Friday, June 27, in downtown Colorado Springs, a gala event with tremendous support from the city and prominent downtown business owners Sam and Kathy Guadagnoli that includes top music, food and drinks, special exhibitions and a chance to meet the drivers and racers with the top qualifying times during Race Week and see their autos and motorcycles. Tickets are available now and a wealth of race information at: www.ppihc.com

The 92nd Running of The Broadmoor Pikes Peak International Hill Climb will be live-streamed across the world through a recently developed online media portal. Featuring footage from the PPIHC archives dating back to the 1920s, this portal will entertain motorsports fans with rare content as they patiently wait to enjoy flag-to-flag coverage of the Race to the Clouds on June 29th. For more information about the PPIHC Media Portal please click here.