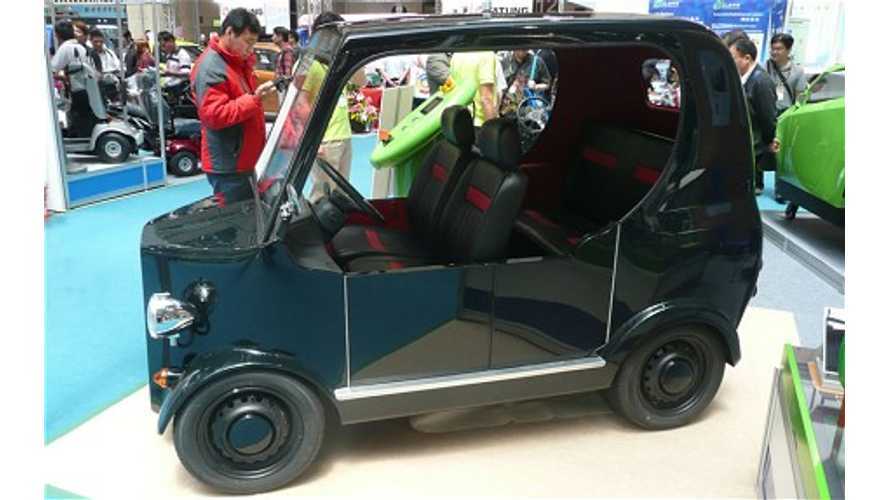 According to the Telegraph, "Every second person of Taiwan's 23 million population owns a scooter or motorcycle. They turn the air at intersections in the capital, Taipei, heady with fumes. When the lights go green these intersections become nursery slopes for aspiring Moto GP riders."

Imagine then if all those gas-burning scooters and motorcycles were electric.

Electrifying Taiwan's two-wheelers is the short-term goal, but beyond that automakers hope that the people of Taiwan will embrace electric passenger vehicles too.

That's why electric passenger vehicles showed up in force at the recent Taiwan Auto Show.

"But there are exceptions. Like the Pihsiang A100, a two-seater, shaped like an art deco cocktail cabinet, which gets its name from the 100-minute recharge time for its batteries. It is currently available only in Holland, but is fully certified for sale throughout the EU. It will soon be joined by the wider-bodied A300 and two flat-bed mini-trucks, the C200 and C500. Four-seaters are also on the way."

Most of these electric vehicles are not familiar to us and likely never will be, but they should appeal to those in less developed markets due to the promise of low price tags.

"The Taiwan Automotive Research Consortium, an agency made up of companies involved in the EV industry, scientists and academics, revealed the skeleton and workings for a range-extender electric car based upon a light, cost-saving and highly versatile steel space-frame."

Apparently, lots of low-cost EVs were on display in Taiwan (read the Telegraph's in-depth report here), but by and large electric two-wheelers and tricycles stole the show:

"Perhaps it would be fairer if the event was re-christened the Taiwan Electric Mobility Show, for there was no shortage of alternatives to the tricycles which south-east Asian farmers use to get their produce to market, the e-trolleys prevalent at golf courses, airports, hospitals and hotels and even mobility scooters."

"And there were electric two-wheelers galore, including an Audi-branded fold-away scooter..."

Honestly, we could care less how many wheels they have.  If it's electric and plugs in to charge, then that's fine by us.  Any move to ride the streets of millions of gas-burners is a move in the right direction.

"Taiwan may be a long way from embracing electric cars, but not electric mobility."