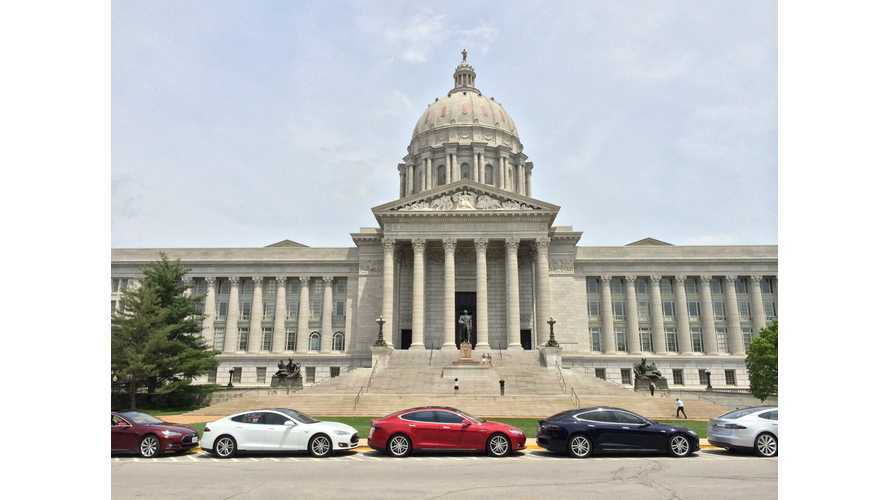 Just over one week ago, Tesla Motors issued a statement on a sneak attack underway in the state of Missouri.  The sneak attack was again an attempt to ban Tesla's direct sales model at the last minute without allowing public comment or providing Tesla with time to work up a defense.

Now, Tesla is thrilled to let the world know that Missouri's sneak attack is dead in the water.

"The fate of Tesla Motors Inc.’s retail strategy in Missouri is on hold after state legislators scrapped a vote on a bill that would have prevented the company from selling directly to consumers."

"Timothy Jones, speaker of the Missouri House of Representatives, told The Wall Street Journal on Wednesday that the legislation would be reintroduced next year with full hearings in the state Senate and House."

And that's a win for Tesla, at least for now.

On May 7, when Missouri's state senate initially passed the legislation, Tesla Motors immediately fired out a statement, part of which reads as follows:

“This change is not an innocent, minor amendment. It is completely unrelated to the original bill, which was about laws regarding all-terrain vehicles, recreational off-highway vehicles, and utility vehicles. It is also a complete 180 from what the original bill proposed. The current statute only bars franchisors from competing against their franchisees (for example, Ford cannot compete against Ford dealerships)."

"Tesla complies with that statute because we do not compete with any franchise. Just as we saw in New Jersey, however, this bill amendment expands the scope of existing regulations well beyond their original intent. They are attempting to do so in part by redefining the word “franchisor” to mean “manufacturer”, a pirouette of which the legislators may not even be aware. To be clear: this is worse than a mere case of dealers trying to protect an existing monopoly – this is a case of dealers trying to create a monopoly.”

Tesla credits owners of Teslas and other electric vehicles for this win, saying that EV advocates protested the proposed legislation by showing up in force at the state capitol in Jefferson City, Missouri.

Of course, Tesla representatives did their part too by meeting with "John Diehl, the Missouri House majority leader and Doug Smith, president of the Missouri Automobile Dealers Association, on Tuesday to discuss the bill," according to Automotive News.