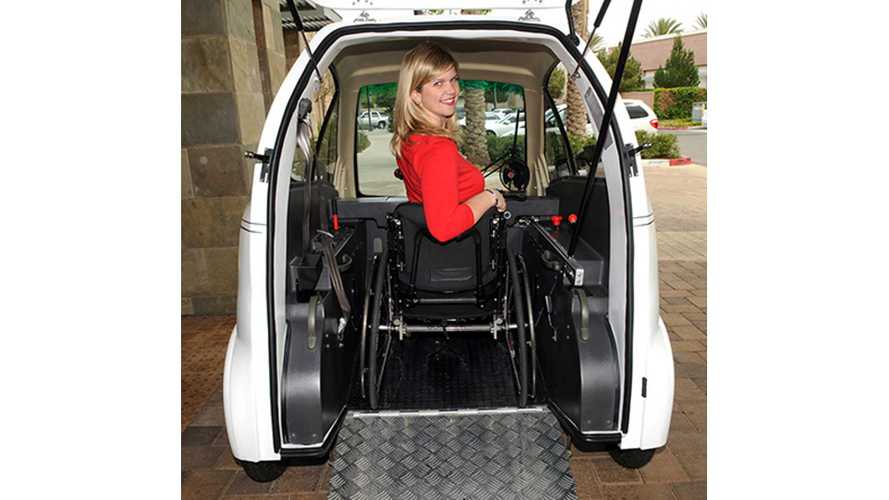 People who are physically disabled now have a solution that is not only environmentally friendly, but can enable wheelchair users to move about freely, confidently, and become non-reliant on others for transportation.

This is achieved by production of an electric vehicle specifically for wheelchair users called the Chairiot Solo.  Chairiot Solo has an MSRP of $18,995.

This vehicle has a range of 50 miles on a single charge and can be charged from a 110v outlet in 6-8 hours.  With a top speed of 25 miles per hour (35 mph in some states and local jurisdictions), it can easily get users to their destination as needed.  The top speed actually exceeds the average speed in urban areas in the US, which  is 24 mph.

The vehicle meets US DOT safety standards as a low-speed vehicle under FMVSS 571.500.

From rolling in to driving off takes 40 seconds or less by an electronically operated rear hatch via a wireless key fob and a ramp that automatically adjusts for the ground or a curb exit.

Upon rolling in, the wheelchair is than locked in place by a special bracket for the wheelchair and rugged floor docks.  The driver is secured by a 3-Point seat belt.

The vehicle has lots to offer in its standard equipment like:

The Chariot Solo made its very first debut at the Los Angeles Abilities Expo and the reactions were very positive.

“The reaction at the Abilities Expo was positive and overwhelming. Thousands of people came by our booth during the three days of the event and we frequently heard the words amazing, awesome, cute and cool."

"Our goal is to deliver an affordable vehicle that will serve the daily needs of many wheelchair users. The Chairiot solo gives them convenience, freedom and independence without having to constantly rely on others for local transportation.”

The first deliveries will be in the spring of 2014.