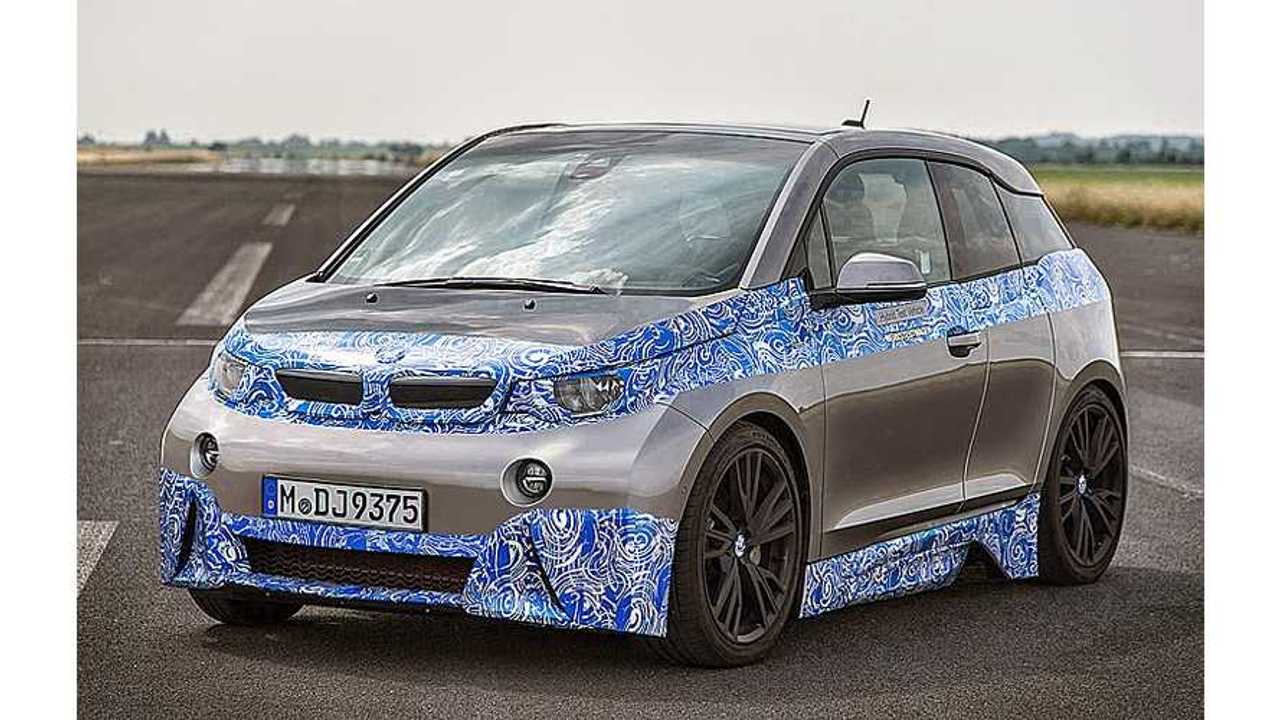 A full range of official press photos of this semi-camouflaged Mi3 will be released a in two weeks before the next big show. This is the only one I was authorized to reveal.

Here's a look at one of the plug-in vehicle posts you may have missed on April Fools' Day.

InsideEVs was "in on it," but we thought you still might like to see the finished work of April Fools' aficionado Tom Moloughney.

This post was in fact so convincing that a couple of other sites grabbed it as real news.

The words below are those of Tom Molughney.  Can you spot the April Fools' Day giveaway?

About six months ago, Eric Loveday of InsideEVs.com wrote this article that predicted the BMW M performance division won't be making an M version of the upcoming BMW i3 or i8. I've known for a while now that that was not true, but the information I got from BMW was under embargo until now so I couldn't comment on it previously. I finally got a chance to look at a pre-production ///M i3 last week. The car I saw didn't have all the body work or the special wheels that the ///M i3 pictured above has since this one is being used for internal testing here at BMW's North American headquarters, but it did have all the performance upgrades and ///M badging.

I was lucky to be one of only a few people to get a sneak peak of the M i3 before its unveiling at NYIAS in two weeks.

Perhaps this was the intention all along, or maybe BMW changed their minds along the way, but both the upcoming i3 and i8 plug-ins from BMW i will get the "M" treatment. Back in August of last year I did a post about BMW offering a Sport Version to satisfy the desires of the performance minded i3 buyers and it turns out BMW was definitely listening. Honestly, I would have really been surprised if the i3 didn't have an ///M variant or at the very least, as I suggested, a special edition "Sport" i3.

One person posted this on Bimmerpost. Perhaps they were wishing for an ///M i3 also?

Recent articles have popped up around the web eluding to the fact that BMW was working on a "special edition" i3 and that it would have a more aggressive appearance, but many assumed that would be reserved for the i3 coupe which is expected to launch about a year after the 5 door hatchback i3 that is available now. That's may be so, but I have confirmed the ///M i3 will indeed be a modified version of the current i3 offering, and it will indeed be available soon after the initial US i3 launch. If the i3 concept coupe does make it to production, it would seem likely to get the same ///M treatment as the 5 door hatchback is.

I knew all along that if BMW really wanted their customer base to welcome the i3 and accept it as a true BMW then they would have to offer a performance version, just like they do with their other models. Performance is in BMW's DNA, it's what distinguishes a BMW from the other premium brands. To not make a performance version of the i3 would seem to be a mistake in my opinion. However I didn't expect it to come so quickly. I figured the ///M i3 would be launched sometime in 2016 to invigorate interest once the initial excitement over the i3 began to wane.

TopSpeed (www.topspeed.com) had their go at what they think the ///M i3 will look like

Loveday wrote, "We suspect that BMW will make available several performance-enhancing products for both the i3 and i8 in the near future, but both an i3M (Mi3) and an i8M (Mi8) seem to be no-goes." That's certainly understandable since BMW had said on more than one occasion that they will not be tapping the M performance division to tweak the i3 & i8. So what do I think changed their minds? My guess is surveys; it's that simple. Last September I received an email survey from BMW i asking me about 50 questions regarding my interest in the i3. I'm not sure if I was included in the survey because I drive an ActiveE or just because I was signed up on the main BMW website for i3 information, but the survey focused on what options I would pay extra for. Almost all of the questions centered around paying for more range and paying for more performance, with one of the questions specifically asking if I would pay and additional $8,000 for an ///M version of the i3.

Fortunately the majority of the respondents must have answered as I did, saying yes we would be willing to pay extra for both range and performance. Yes, I know the i3 is focused on sustainable personal transportation for an evolving world, but hell, there's always the weekends, and i3 owners will want to autocross their cars just like 3-Series owners do. That's part of the BMW heritage, and part of why people gravitate to the brand.

Over the two weeks we should be getting all the details for the ///M i3 & ///M i8 models. The New York Auto Show opens on April 15th and both ///M cars will make their world premiers there. This will coincide with another special announcement regarding never-before released information about DC Fast charging for the i3, so if you are an i3 fan, head to the NYIAS this year. The Press preview days are April 16 & 17th, with the show opening up to the public on Friday the 18th and running until Sunday, April 27th.

Opening ceremonies of NYIAS will include Mayor de Blasio declaring the show officially open and that will take place at the BMW exhibit, likely next to the ///M i3 and ///M i8. This all but guarantees that pictures of the new performance-orientated plug-ins will be plastered in every newspaper in the NY metropolitan area. Unless BMW strategically places their gas offerings there which would be very disappointing.

Little is actually known about the spec's of the ///M i8, but I do have some of the details on the ///M i3. Besides a more aggressive exterior styling, including a new front grill and spoiler, monochromatic paint (Yes, the black hood and rear diffusers will be painted the color of the car) a larger rear spoiler and fender flares. The standard wheels on the ///M i3 will be the 20" Sport wheels that are currently available on the i3 (the 19" wheels aren't available on the ///M i3). However there will also be a wider wheel offering which puts a 20" x 6.5" wheel on the car with 245/40/R20 Brigestone Potenza S001 Tires. The wheels look very similar to the optional 20" BMW i8 wheels but they appear to be painted black in the press photo I obtained. The upgrade tire size is nearly perfect in diameter and the speedometer will not be affected at all. I suspect this will dramatically improve the handling, but it will certainly come with a price. I'd expect this tire and wheel combo to likely be about a $2,000 option, but for the performance-minded, it will likely be worth it!

Specification-wise all I know is that BMW is indeed using the same motor that the base i3 uses, it's just been modified to increase power output by about 25%. If that holds true, figure on about 210 horsepower and 230 lb-ft of torque. I was told the goal was to get the 0-60 times in the mid 5 second range and with that kind of added power I believe it is definitely within reach since the stock i3 BEV does it in about 7 seconds with 25% to 30% less power. The suspension will obviously be improved for performance and the interior will likely get the usual smattering of ///M badging and special seats which offer more support.

Now for the most intriguing part of this. The i3 has been designed around the philosophy of weight savings whenever possible. Many of these features will add weight which reduces efficiency. Plus, the more powerful drivetrain will likely use more energy than the stock set-up does. If someone were to drive the car hard (like it should be driven) then the range may only be 40 or 50 miles, and that's just not enough. So I asked if the ///M i3 would be available with the range extender, and was told definitely not; it will only be available in BEV form. Pressing further about the likely limited range of what will be a very expensive 40 mile electric car he replied, "The ///M i3 will have a greater electric range then the standard i3. It will also charge faster and offer technology unavailable in any other electric vehicle on the market." Now this is indeed getting interesting. There are really only two possibilities here that make any sense. It either has a larger battery pack, perhaps utilizing the space where the range extender goes, or BMW is using the higher density batteries that they have been testing in MINI-E mules for a couple years now. These cells are reported to have about a 30% greater energy density than the stock i3 batteries that come from Samsung have, so that would seem to work here.

I wish I could say I've had the opportunity to test drive it, but I didn't. I was only allowed a brief in person look at the one pictured above in Arravani grey which was at BMW NA's headquarters undergoing internal testing and give the BMW Press photo of the semi-camouflaged one on the track. Even without driving it or knowing what it's going to cost, I decided to cancel my Electronaut Edition i3 and place my order for an ///M i3. They aren't officially available yet so please don't call your dealer and ask to reserve one, that won't be possible until after the New York Auto Show. The ///M i3 & ///M i8 will also be available in "unique colors specific to the M division," I'm hoping Melbourne Red is one of them ;)