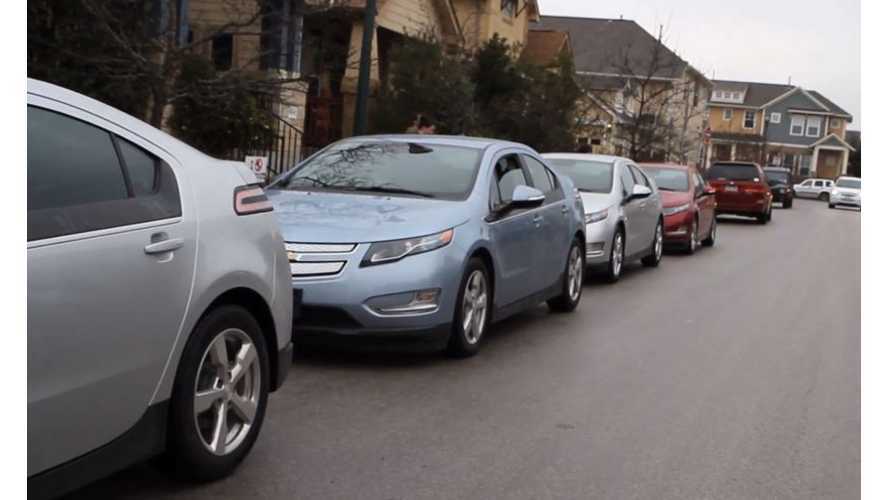 My daughter, the wildlife biologist, would tell you that wild animals can be viewed in the following manner: Watch a TV documentary, see them caged in a pet store or zoo, or know their habitat and follow them in the wild.

So, if you yearn to see them in the wild, where are the places you should go to begin your quest?

There’s a place in Austin, Texas, where the residents have agreed to be the test subjects for a renewable energy and smart grid future known as The Pecan Street demonstration project. The community now has nearly 60 Chevy Volt owners alone, thanks to the demonstration project’s commitment to match the federal government’s $7,500 rebate incentive, effectively halving the price of the hybrid electric cars. And, in addition to learning where and when EV owners charge up their cars, Volt manufacturer General Motors is hoping to learn from the folks in the Pecan Street project how a residential fleet of electric vehicles might change the electric grid.

It’s EV Town USA and for good reason, one of which is the city’s 300-plus plug-in vehicles.

Normal, Illinois (along with nearby Bloomington, Illinois) set out on a mission years ago to become the most EV-friendly place in the United States.

The two cities offer all sorts of incentives for EV purchasers, including a sales tax rebate and charging stations everywhere (the current count is at 48 Level 2 sites, one CHadeMO unit and one Tesla Supercharger location).

All of the area’s charging stations are free.

The worlds largest airport,  Hartsfield-Jackson is also home to the #2 largest private EV parking with a total of 25 spots. With the state incentive in place for at least another year, Atlanta will remain a hot spot for sightings.

San Francisco is home to one of the most dense populations of EVs in the US.  The number of EVs are certainly impacted by the close proximity to the manufacturing facility of Tesla Motors in Palo Alto.  Palo Alto is so forward thinking toward EVs that it has  approved new home requirements to be pre-wired for EV charging. Therefore, if your are looking to view a Model S, (and many more EVs) San Francisco and the surrounding areas will sure to delight.

If you are hoping to catch a sighting of this Fiat 500e , it is a bit harder. This compliance EV was only available in California, but will go on sale in Oregon starting in the summer of 2014. Look for it in EV rich urban areas like Portland, Oregon. Portland is listed as #3 on many maps for EV growth.

Inside EVs on the look out

There are so many places to catch EVs in San Diego, but a guaranteed sighting can be made at the San Diego Zoo. You are almost certain to catch a viewing at one of their solar powered Blink EVSE's. If not, keep your eyes peeled for a stealthy Smart ED Security as seen on the opening of this piece.

There are lots of reasons why you can make an easy EV sighting here. For one, an island completely eliminates the range argument. Though Hawaii has one of the highest electricity rates around 37 cents per kWh,  Hawaii is a great place to capture solar energy, most driving distances are short and the EVSE infrastructure is one of the best.  Hawaii's, solar installations have grown at such a rate that it can be difficult to gain approval for new residential solar installations. Look for Hawaii to be a great place for  future vehicle-to-home (V2H) applications once battery chemistry is in place to support the additional cycles.

For sure the attraction of using the HOV lane has helped the adoption of EVs in LA. You most certainly will find several on any given day especially during rush hour. I recently went into the wild to do what even most sane Californians will not do. I drove the five (Interstate 5) from San Diego to North Los Angeles during rush hour(s). I saw three cars burn to a crisp (all ICEs). I saw the king of the California Highway, the Toyota Prius HEV in droves and some PiPs. But for the plug-in variety that I sought, the Chevy Volt was by far the dominant force for the long freeway commute followed by the Tesla Model S.

Yes, the Motor City is a reasonable place to spot EVs in the wild. With the Chevrolet Hamtramck facility investing nearly a billion dollars producing the Chevy Volt and their general love for auto technology, don't expect Detroit to be left behind .

In SmyrnaTennessee, a LEAF now rolls off the line every 15 minutes making it understandable how an EV sighting here is not too difficult. This facility is currently tooled for just under 40,000 but has the capacity for 150,000 EVs annually.

The home of our capitol is also a decent sighting area which is helped by the DC exemption from excise tax imposed on original certificate of title, Maryland's $2000 excise tax credit, and reduced property tax credit in Virginia counties Arlington and Loudon as well as discounted off peek charging rates.

Massachusetts continues to be a place for EV sightings and this will only improve with the Massachusetts Offers Rebates for Electric Vehicles (MOREV) program which will provide rebates of up to $2,500. Every Massachusetts resident is eligible for these incentives, which will be funded with $2 million in Regional Greenhouse Gas Initiative (RGGI) auction proceeds, as long as their vehicle is registered in Massachusetts.

Do you remember your first Toyota Prius sighting? Can you now recall an outing without a Prius sighting? Get ready for EVs, for their adoption curve is moving close to 3x the rate of the hybrid revolution.