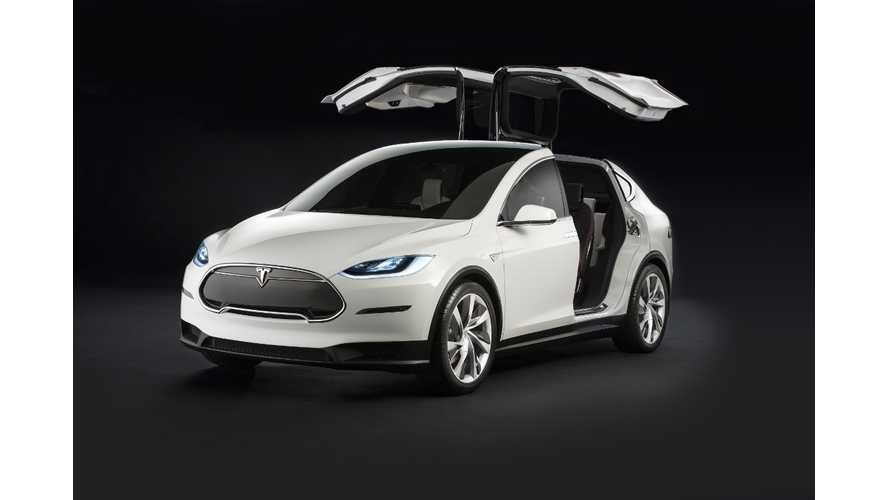 These are the words nobody wishes to hear:

The launch of the Tesla Model X has been delayed.

In its Q1 earnings report, Tesla Motors tried to slip by a mention of the Model X as though it wasn't delay-related, but it was fairly apparent:

“Extensive development work on Model X is underway and we expect to have production design prototypes ready in Q4.”

“Model X efforts are on track to ramp up production in the spring of 2015. We have just completed the final studio release of the vehicle. The tooling process has started with several suppliers …”

With design prototype not expected before Q4 2014, there's almost no chance that even 1 Model X delivery will be made in 2014.  Previously, Tesla Motors had announced the following in regards to Model X production:

Mass production by April 2015 is now "ramp up production in the spring of 2015," which could imply as late as June 2015 or as early as March.  However, when an automaker goes from a specific month to a more vague by season (Spring, Summer, etc.) statement, that usually indicates a by the end of that season release.

If we had to wager a guess on production, it would be that Tesla Motors will indeed begin limited Model X production in Q2 of 2015 and will slowly ramp up weekly output rates before hitting full production status by late 2015.

What's your guess as to when the Model X will enter production and when it will hit full production status?  And will these timeline changes impact Tesla's business and its would-be Model X owners?