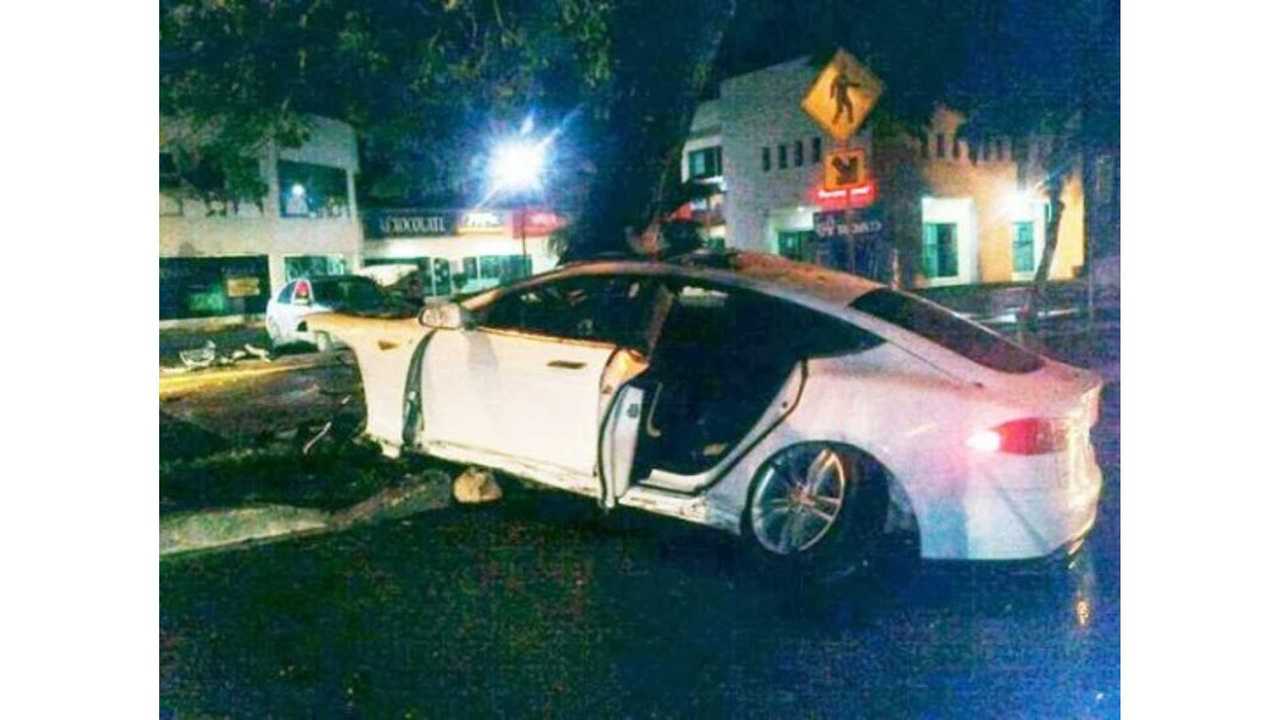 We believe these changes will also help prevent a fire resulting from an extremely high speed impact that tears the wheels off the car, like the other Model S impact fire, which occurred last year in Mexico. This happened after the vehicle impacted a roundabout at 110 mph, shearing off 15 feet of concrete curbwall and tearing off the left front wheel, then smashing through an eight foot tall buttressed concrete wall on the other side of the road and tearing off the right front wheel, before crashing into a tree. The driver stepped out and walked away with no permanent injuries and a fire, again limited to the front section of the vehicle, started several minutes later. The underbody shields will help prevent a fire even in such a scenario.

Those are the words of Tesla CEO Elon Musk who wrote of the fiery Tesla Model S crash that occurred in 2013.

As we reported when the news initially broke of the wreck in Mexico:

Location: Merida, Mexico in the northern area of the Yucatan Peninsula

Time of incident: 4 AM

Cause of fire: Violent crash with low wall after vehicle jumped curb and went airborne.

Driver: Observed driving at speeds in excess of the speed limit. Fled the scene of the accident. Injuries unknown.

Passengers: If present, believed to have fled the scene, too. Injuries and number of passengers unknown.

Liz Jarvis-Shean, a Tesla spokeswoman, issued this statement shortly after the crash:

“We were able to contact the driver quickly and are pleased that he is safe. This was a significant accident where the car was traveling at such a high speed that it smashed through a concrete wall and then hit a large tree, yet the driver walked away from the car with no permanent injury.”

Yucatan.com, who was on the scene following the Model S wreck, reported this at the time of the wreck:

According to witnesses, the driver was traveling under the influences of alcohol and apparently injured.

According to the data, the mishap occurred on Avenue Chamber of Commerce 32nd Street San Antonio colony Cucul, right in the roundabout Pocito .

The Tesla plates 89-73 ZAN- journeyed from west to east on the avenue.

At the roundabout, due to excessive speed, the driver at the wheel lost control and crashed into the lining of the gazebo.

The vehicle bounced, jumped the curb and crashed into the site 248 , owned by Ligia Marrufo ; demolished a part of the electrified fence and then crashed into a tree. On impact, the vehicle caught fire.

With the help of other drivers, the driver got out of the car and boarded a private vehicle in which he fled.

Now that we have the whole story, we must say we're amazed the driver survived.  Per Musk:

That does not sound survivable to us.

The US' safest vehicle for sure lived up to that claim in this incident, which to us reinforces Tesla's insistence that there's no safer vehicle out there today than the Model S.