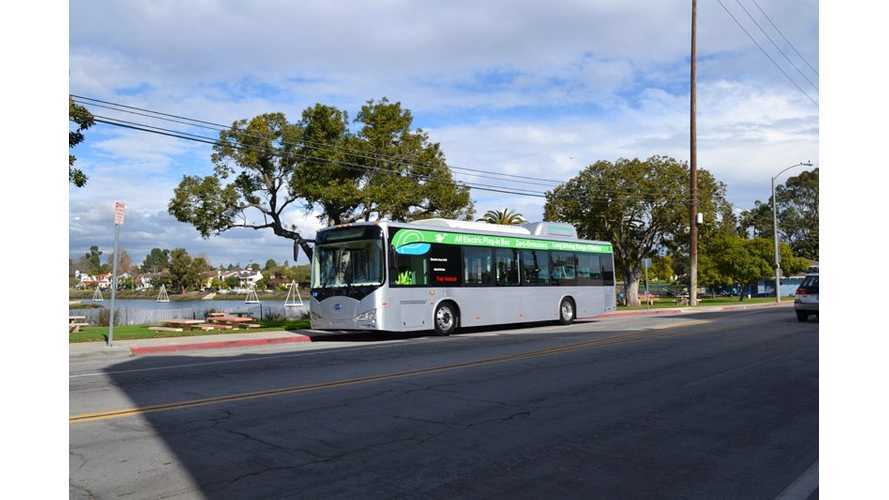 As we mentioned earlier, Long Beach Transit had problems with receiving funding from federal grant money for 10 BYD vehicles because the Federal Transit Administration found that BYD was not eligible to win the work in March 2013 due to the fact that the manufacturer could not certify compliance with the federal disadvantaged business enterprise program at the time.

"BYD said that the Federal Transit Administration (“FTA”) withdrew funding of the contract as a result of a good faith error in BYD’s pre-bid disadvantaged business program certification in February 2013. LBT announced that BYD won the competition for the contract on March 24, 2013. Based on the contract award, BYD then submitted a percentage goal for purchases from disadvantaged businesses in June 2013. The FTA concluded, however, that BYD should not have certified to compliance prior to submitting a goal, even though submitting a goal in the absence of a contract award would have been meaningless."

Now, both BYD and Long Beach Transit mutually terminated the electric bus contract and LBT will open tender once again. BYD is now eligible to participate in any future contract funded by the FTA, so the Chinese company hopes to win a second time.

“It is surprising that the FTA waited nine months to withdraw funding from this contract—after BYD spent millions of dollars—due to what can only fairly be described as a technical error that in no way casts doubt on our deep commitment to purchase from disadvantaged businesses.”

“In an effort to demonstrate our good will to both the people of Long Beach and the FTA, we have agreed to mutually terminate the Long Beach Transit contract so it can be re-bid without delay.”

“We are confident that we will prevail in any competitive re-bid in the future for the same reason we prevailed last year: Our superior technology.”

“We have the longest range of any electric bus manufactured in the world, with up to 24-hour service on a single electric charge, and thus, no need to construct conspicuous charging stations throughout the bus routes. Our buses can be used without interruption during operating hours, and can be recharged overnight at the time of lowest electrical rates. We have no engine, no clutches and no transmission—we have simply in-wheel-hub motor drives and batteries. It is for these reasons that the Los Angeles County Metropolitan Transportation Authority decided last year to purchase up to 25 BYD buses.”

“We remain committed to a robust program of purchasing from disadvantaged businesses. We also look forward to creating many new jobs at our two new manufacturing facilities in Lancaster, California and administrative offices in Los Angeles. In less than two years, we already have created 60 new jobs in both places. We expect to increase to 100 new jobs by the end of this year, and to 200 by the end of next year.”

“The people of Lancaster are excited that we have located two manufacturing facilities in their city. We are proud of our job-creating record in Southern California—American jobs with technology that is operating and praised throughout the world.”

“We are optimistic, enthusiastic, and dedicated to being a successful American company, with clean, silent, and economical electric energy buses produced by well-paid and supportive workers. Make no mistake: We are here in Southern California and in America for the long-term.”

So, a minor setback for BYD, but the bus maker will be back for the second round of bidding and, as we've seen more times then we can recall, BYD is capable of undercutting the competition and sealing the deal.  Will BYD win the contract again?  We shall see.