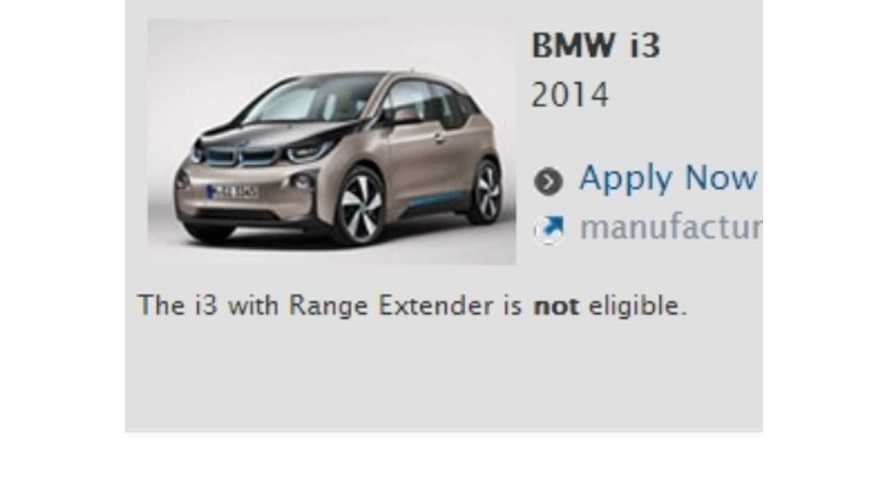 March 26th, 2014 PM: After A Little Chat With BMW, CCSE's Wording Of The BMW i3 REx's Certification Changes To Pending

Nathan Crawford, a prospective BMW i3 driver from Southern California reports to InsideEVs that the California Center for Sustainable Energy (CCSE) has recently updated its website. It presently indicates that the BMW i3 with range extender does not qualify for the clean vehicle rebate program (CVRP). The CCSE is a San Diego nonprofit, which administers one of the key programs the Air Resources Board established to further its mission, and reduce vehicular emissions levels in California.

Editor's Update: After being alerted to the posted online status of the BMW i3 REx, the CCSE has clarified that while the extended range BMW does not currently qualify for participate in the CVRP program, the reason is not that it has failed the criteria - but that it "has not been certified the ARB yet"

The rebate program is an important driver of adoption for plugin vehicles, and if the BMW i3 REx did not qualify, this will very likely impact the decision-making process for prospects. While some buyers might be able to switch to the pure electric trim, others could decide to go with a different vehicle altogether. Although the clean vehicle rebate is important, other programs, such as single-occupant access to HOV and HOT lanes, could be even more significant.

The qualification criteria for both HOV stickers and the rebate hinges on one common denominator: Advanced Technology-Partial Zero Emissions Vehicle (AT-PZEV) or Transitional Zero-Emission Vehicle (TZEV) certification. After all, these vehicles are supposed to help us make the air cleaner, and not the other way around. To that end, the Air Resources Board requires all auto manufacturers to submit a vehicle for certification and testing, which can take several weeks. It's  important to note that if a new car model is purchased before it was added to the list of eligible vehicles, it will not qualify for any benefit under the CVRP program.

Based on what the Center for Sustainable Energy has published on its website, it's difficult to say if the BMW i3 REx has been submitted for certification and failed, or if it's still pending submission. The outcome would be the same in both cases: the CCSE won't issue a rebate, and the DMV won't consider an HOV sticker application, until a vehicle has been deemed eligible by the Air Resources Board, and has passed the certification process.

While it's still unclear if the range-extended trim will qualify for the $1,500 or $2,500 rebate amount, and if it will get green or white stickers, it's anticipated it will qualify for both programs, but at this late stage we can't be sure.  The 2011 Chevy Volt did not meet the AT-PZEV emission criteria and thus did not qualify.  Let's hope that the i3 REx will avoid a similar fate.

2011 Chevy Volt Did Not Qualify For Green Sticker, But Later Model Years Volts Did

The CVRP implementation manual for fiscal year 2013-14 states the following on the topic:

BMW i3 With REx

With the exception of ZEMs, the vehicle model must be certified by ARB as a new, zero-emission or plug-in hybrid electric vehicle as defined in the California ZEV Regulation, section 1962.1(d)(5)(A), Title 13, CCR for 2009 and subsequent model years. The manufacturer must also certify that the vehicle model complies with all applicable federal safety standards for new motor vehicles and new motor vehicle equipment issued by the National Highway Traffic Safety Administration (NHTSA). A table summarizing the Federal Motor Vehicle Safety Standards (FMVSS) for a number of vehicle categories is provided in Attachment B. FMVSS are found in Title 49 of the Code of Federal Regulations (CFR) Part 571. If a written statement and documentation have been previously provided to ARB in the course of applying for the ARB certification of the vehicle model, no additional written statement is required.

And for the record, BMW previously issued this statement on the topic of its i3 REx and CVRP:

“The i3 with Range Extender qualifies for the green sticker, which is limited in numbers and will run out in the eventual future (possibly late in 2014). This is technically to be expected since the car is equipped with an internal combustion engine which potentially emits fuel fumes, and thus makes it harder to qualify for the white sticker which typically can be obtained by full battery-electric vehicles (BEV) and Hydrogen vehicles. The white sticker is not limited in terms of numbers. There is a continued, constructive relationship between BMW and CARB executives, and there has been no reversal of position. It also bears mention that the i3 with Range Extender qualifies for the full CA incentive amount of $2,500.”

*We've reached out to BMW for response to this latest development in the i3 REx CVRP/green sticker saga.  We'll update this post when we receive a response.

UPDATE: BMW has provided us this official response:

Eligible Plug-in hybrid electric vehicles (PHEV) from other manufacturers have qualified for the green HOV lane sticker. These have the same access and expiration date as the whiter sticker, however, the total number of eligible green stickers is limited.