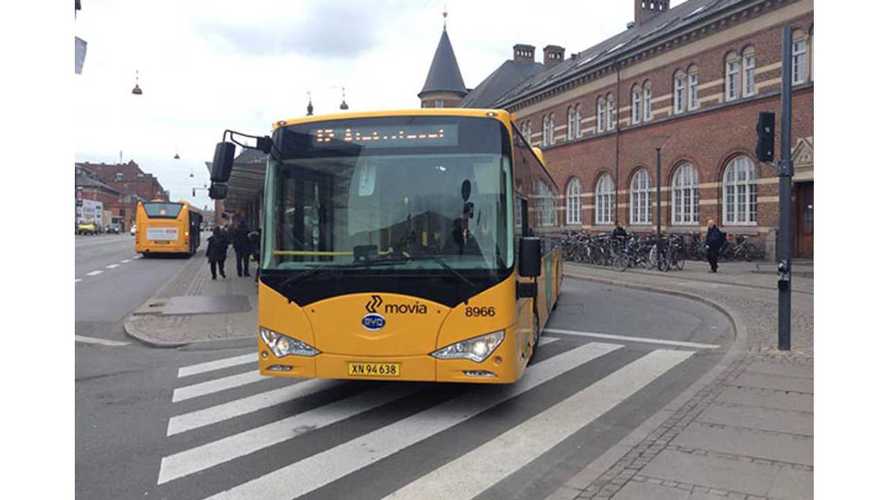 BYD breaks its own electric bus record by clocking 325 km (or 202 miles) on public roads in Copenhagen in Denmark.

What's even more interesting is that the ebus used by bus operator City-Trafik still had several percent of spare energy.

"The 12 metre BYD ebus completed its normal service on Route 12 a week ago, a total distance of 110km (or 68.4 miles) carrying an average of 40 passengers. Then the bus set off along the Ballerup highway – a standard motorway – and further covered a distance of 215km (or 133.6 miles) ending the day with 8% of battery charge remaining, clocking up a total of 325km (202 miles) on a single charge."

The previous BYD record from its trial in Poland amounted to 310 km on 69% of energy.

Another Chinese electric bus in Denmark was tested separately by Arriva, which did 240 km with some 8% spare energy:

"A second trial of an ebus in Copenhagen with the city's other operator Arriva produced a no less impressive result. The bus completed an arduous full day of city operation – 150km (or 93 miles) from 06:00 to 16:50, operating fully loaded and with the electric heating system in constant use. The bus was then taken on a 90km (or 56 miles) motorway run and again ended up with a 8% charge remaining, covering a total distance of 240 km (149miles) on a single charge."

Both vehicles were specially equipped to handle the rigors of the Scandinavian winter. According to BYD, the running cost for electric buses are low in Denmark: